Answer the Call poster exhibition opens in the Hunt Museum

HISTORY:  2016 WILL SEE FOCUS ON 1916 AND WORLD WAR ONE IN ARRAY OF CITY COLLECTIONS 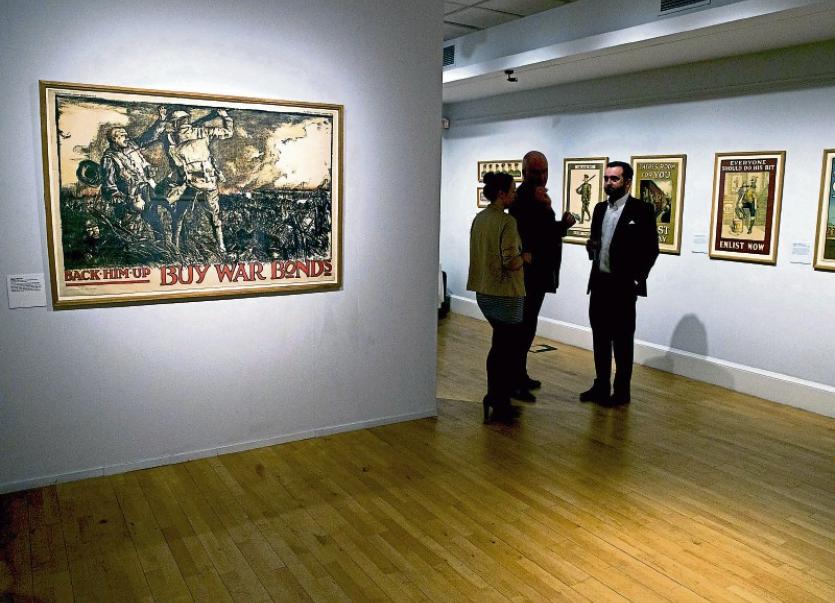 William Blair, (right) at the opening of Answer the Call

THE HUNT Museum has launched its series of exhibitions for the year, beginning with one of historic posters from World War One.

The event, which was unveiled last week, reveals an evocative array of recruitment posters, on loan from the Ulster Museum (National Museums of Northern Ireland), Belfast.

The emotional pleas encouraging recruitment to the British Army captures the mood of the era as thousands of young men from across the island responded to the call to arms.

The exhibition, opened by William Blair, curator of history of the Ulster Museum, “reminds us that all the forces of the State – creative and political were rallied to respond to the conflict – a conflict on an unprecedented scale.”

”The varied posters on display – image and text based – appealed to all shades of political opinion in the period - nationalist and loyalist,” said Mr Blair.

Some 200,000 men responded to the call and posters such as these were an important too in encouraging recruitment.

Hugh Maguire, director of the Hunt Museum, said that apart from strengthening their ongoing good links with the Ulster Museum this exhibition sets the Easter Rebellion in the wider context of the prevailing discourse early in 1916.

“In many respects this will make the contrast with our forthcoming exhibition on Ned Daly and Limerick all the more dramatic,” said Dr Maguire, noting that one political narrative and culture was interrupted by another.

The exhibition is open daily free of charge until March 11 and is supported by a programme of lectures and classroom activities.

This exhibition will be followed in March, by an exhibition on Limerick and its connections with the 1916 Rising, based on the Daly papers, which will be on loan from the Glucksman Library in the University of Limerick. That exhibition will run from March 21 to May 15.

The course of their exhibitions will change slightly in May, with an exhibition of paintings by the renowned Robert Ballagh, entitled A Terrible Beauty: Centennial Reflection.

Their year of exhibitions will close in October with a photographic exhibition by Eamonn Farrell, focusing on ‘power politics’, and particular Charlie Haughey and Desmond O’Malley. It will run from September 5 to October 16.

A retrospective of Celia Holman Lee’s life in fashion was among the most successful exhibitions held in the Hunt Museum last year, helping to draw in crowds of over 110,000.

Footfall in the museum in 2015 remained “healthy, though not quite as dramatic as 2014, during City of Culture.”

Ideally, he said, they would need three to four galleries to hold as much as we would like.