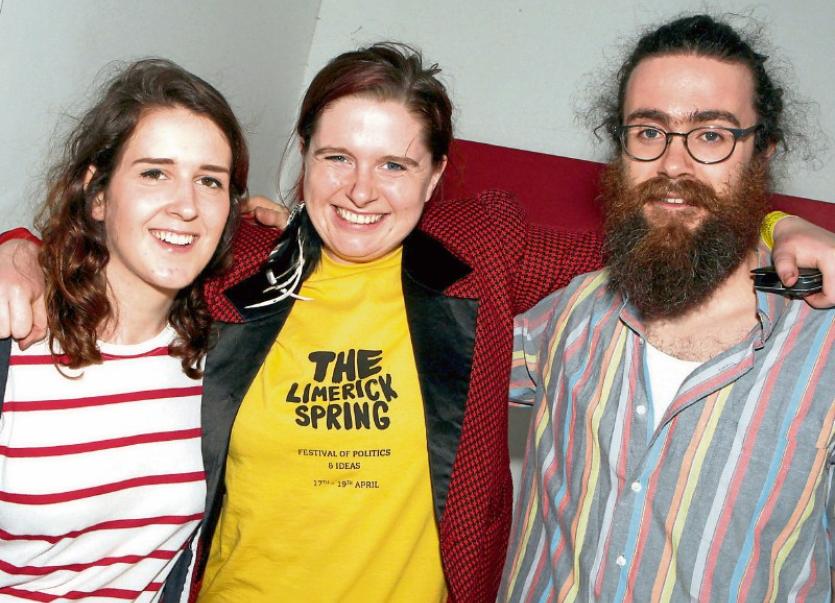 Kate O'Shea, centre, with Emer Casey and Alan Crowley at the Political Protest Poster making event in Limerick Printmakers as part of the Limerick Spring

CHILDREN from Limerick and beyond now have the opportunity to publish essays and stories in a publication that will be launched at the annual Limerick Spring festival.

In association with the Limerick Printmakers and the Limerick Spring, Rumpus magazine — a community-based magazine — will publish a kids version of their magazine, at the festival this year.

The theme of this year’s exclusive publication, which is open to children age four- to 17-year-olds, is ‘home’.

Kate O’Shea, who previously worked with the Limerick Printmakers and is one of the organisers of the project, said that the main aim of the magazine is to bring local, national and international young voices to the annual festival.

“This year, we wanted more kids to get involved in the Limerick Spring, so it would be good, we thought, to have kids from Limerick and from around the world. So we have decided to put an open call out to people in Limerick and kids dotted around the world, and this project is on the theme of ‘home’. The theme of the Rumpus magazine is ‘sanctuary and refuge’, so we wanted a kid’s view of what home is,” she explained.

Ms O’Shea is one of three organisers of the project, including Emer Casey and Mairead Link.

“The bigger responses we get, the better. When I did the magazine previously, the magazine unfolded into a poster, which is what I’ll probably do for the kids’ version.

“We are going to do an event at the Limerick Spring, so there will be a little press launch for the kids. We will have the magazine there. We will try distribute it elsewhere, probably online as well,” she added.

She said that it is possible, depending on the response, the project could be published in book format.

Deadline for submissions of written articles or drawings is March 24, at 5pm, and to be sent to rumpuskidssubmissions@gmail.com.