Traveller women focus on their homes in Limerick exhibition

In a unique exhibition at the Hunt Museum, 13 Traveller women explain what their homes mean to them 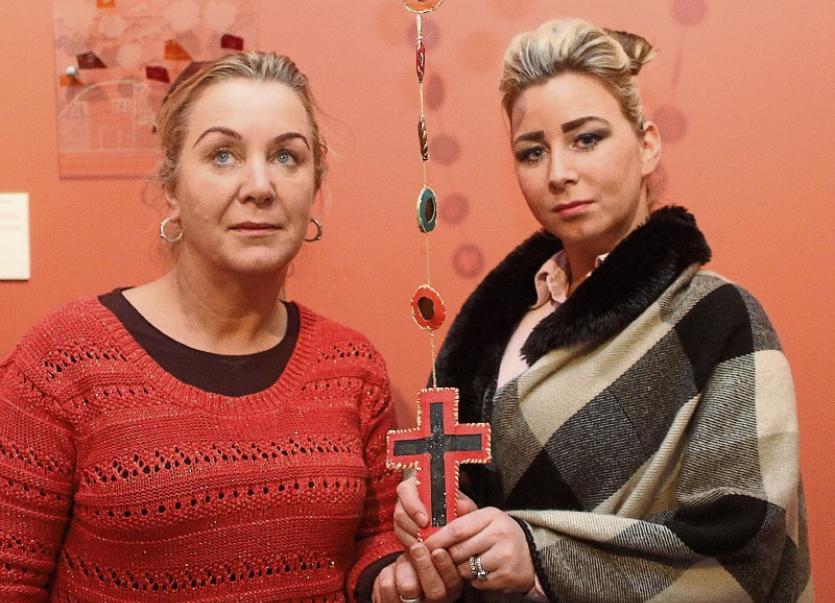 YOU HEAR a lot about Travellers,” says Bridgie O’Reilly, “but you don't hear good things, not at all. Day to day, everyone is struggling - for somewhere to bring up your children, being a mother, and a parent, and living in the conditions we live in.”

In a new, thought-provoking – and now award-nominated – exhibition in the Hunt Museum, Bridgie was one of 13 Traveller women, aged from their early 20s to 60s and based in halting sites across the city, who took part in the museum’s outreach programme.

Their medium was glass, and they learned to work with it over eight weeks, under the esteemed artist Roisin de Buitlear. Her own interest in religious iconography proved fitting with the group, with many citing religion as an important part of their home life.

Their mission was to explain to the wider community and the public at large what home means to them – and the challenges they face.

For many it was a chance to show their worth, but also to show how both Travellers and settled people have much in common in their modern lives.

Bridgie is a 43 year-old mother of four who has lived in Ballysimon for the past 30 years, alongside eight other families in one halting site.

“This was a first for us as a group of Traveller women,” she told the Limerick Leader of the workshop.

“We had never done anything like it before and were all a bit apprehensive. Roisin gained our interest and respect from the word go. It was a very positive project to work on, a very honest project, and a chance to show others the positive side of our community.”

“People don’t think we’re all alike, but we are all alike. We all have financial problems and accommodation problems. When you grow up with discrimination it’s hard; you’re made to feel different. It’s very hard to find work, especially when you’re a Traveller, almost impossible,” said Bridgie, who has now found part-time work.

Outsiders Look In is the telling title of the glass pieces made by Kathleen and Julie Faulkner.

“We made this piece so outsiders can see what we're living in, our conditions, and how small the trailer is. You can have a home out of anything. It doesn't have to be a house. Our home is in a caravan. The bigger picture is that we want our home to be in a house. Home is somewhere to live. It's family.”

The windows, fogged up with condensation, have now been flung open. We are standing inside the space of a typical caravan, within the confines the museum.

The exhibition space has been recreated in a similar sized space to demonstrate to the public the cramped confines that Travellers live in. Some of those present have families as big as six and are on the housing’s waiting list.

As temperatures turn to freezing this week, some people are feeling the cold more than others. “Every morning in freezing temperatures, I have to leave the window open to get rid of the condensation that forms inside,” wrote Ann O’Neill in a piece to accompany her creation, entitled Wet Windows.

“These are summer caravans, not made for winter. My son has trouble with his chest. I live on a council halting site in Limerick city. I live in a caravan with my grown up sons. We also have a laundry room which one of my sons uses as his bedroom.”

Denise Donovan, in The Voice Box, said her piece is “about living in a square.

“Everyone gets their own square plot on a halting site, your own bay which is surrounded by walls. The mouth [etched on glass] represents Traveller needs, and that no one listens to their voice. Everyone should have freedom of speech. No one listens when we need help.

“One of the best things about living in a caravan is hearing the rain on the roof in the mornings. You can hear the rain and the wind and it's lovely when you're inside and it's warm. However, sometimes the chalets can be very cold, and they can lift and shake in high winds.”

The title of a glass piece created by Joanne Faulkner, Margaret Faulker and Olive Faulkner is again revealing – We’re all the One.

Hannie O’Reilly recreated a church through glass with her daughter Margaret.

”The Church is a big part of our lives. We go to Mass every Sunday, because it is our religion, and religion is very important to our family. Our home is a big mobile home caravan. It is a place of love, peace and where we are full of happiness,” explained Margaret.

Teresa O'Donoghue who created a Sacred Heart picture through glass again wanted to focus on the importance of religion to Travellers. “They pray in good and bad times, you have to have faith,” she said.

Ann O’Driscoll focused on rosary beads for her piece. She says they give her peace of mind.

“The rosary beads are about trying to keep our religion in the family and in the home. If there are problems in the family I spend a lot of time saying the Rosary. I get great consolation from my prayers and my Rosary beads.”

Artist Róisín de Buitléar, who worked with these women, described them as “extraordinary” and said it was “one of the most beautiful projects” she has ever worked on.

She said the lives of Traveller women “are as complicated and busy as anyone else’s lives, but they also have a different set of ethics”.  She praised the women she worked with as being “incredibly open, honest and generous”. ”I have huge admiration for how you live your lives and your sense of home,” she said to the women.

The outreach programme began shortly after the Carrickmines disaster in Dublin, which left 10 people dead after a fire engulfed a caravan site, and saw another 15 left homeless as they attempted to be accepted in other communities.

Dr Hugh Maguire, the director of the museum, emphasised that the museum is for everyone and that all people in the community should take ownership of it. He described the exhibition, both in terms of its contents and its use of physical space, as “very evocative”.

It was supported by the Limerick city Traveller Health Advocacy Programme and funded by Limerick City and County Council. The exhibition, entitled Home, runs daily until Thursday, January 28.

Among their upcoming exhibitions include a photographic exhibition by Eamonn Farrell, focusing on Charlie Haughey and Desmond O’Malley. History will also be a major focus, first taking in an exhibition of historic posters around WWI from the Ulster Museum, running from February, followed by an exhibition on the Ned Daly papers, from March.