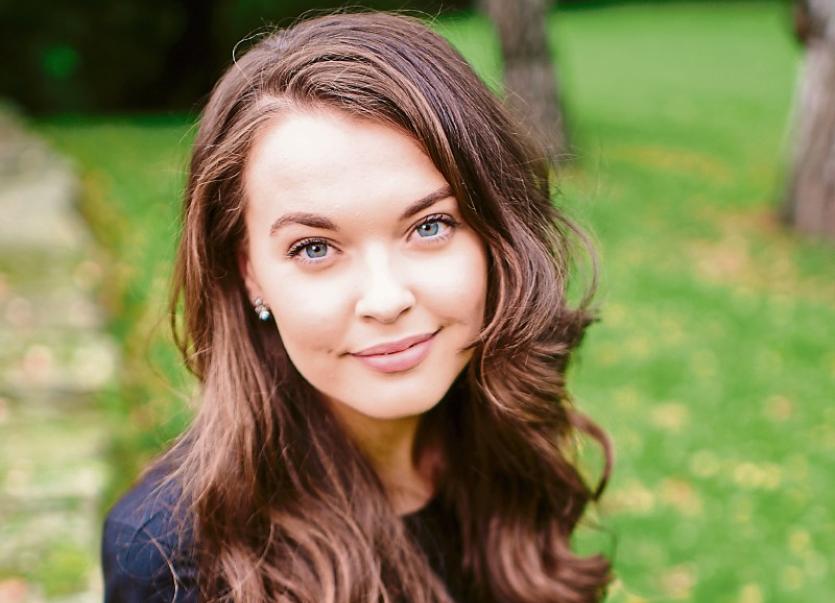 SOPRANO wunderkind Sarah Shine will perform again on the international stage as she vies for a place in the Veronica Dunne International Singing Competition finals, in Dublin

The 22-year-old Rhebogue woman said that she is “really excited” about singing in the heats, which kick off this Friday, and hopes to be singing at the grand finale with the Wexford Festival Orchestra, at the National Concert Hall, next Thursday.

In the days leading up to the competition, the young opera singer told the Limerick Leader that her career has been a “whirlwind” since October, when she earned a spot in the top 40 of the world-renowned Neue Stimmen International Singing Competition.

Then just 21, Sarah faced 1,400 other talented singers from around the world, after succeeding in her auditions in Amsterdam.

“I was up against people who have probably sang in opera houses all around the world. when I got back, I got an e-mail saying that I had been invited to the final round. That week was amazing. I got some great feedback from directors, and I was so honoured that I was even there.”

Though she did not make it to the final, when she was preparing her December schedule at home, she received a call from the competition organisers to attend a Christmas concert, in Washington DC.

On the week of December 10, Sarah performed at the German Ambassador’s residence, alongside virtuosic stars such as Renée Fleming, and in front of eminent figures, including multi-billionaire mogul Liz Mohn.

She said, “this was one of the greatest things I have ever done”.

For Sarah, her achievements are rooted in the training that encompassed her singing life since she was a teenager. Even though, she admitted, she “never dreamed of becoming an opera singer” when she was young, at 13 she started working with one of Ireland’s most acclaimed mentors — Veronica [Ronnie] Dunne.

She first started doing 30-minute classes with Sr Frances Roche, in Limerick, and attended the Limerick School of Music, before meeting Ms Dunne.

For four to five years, her teacher taught Sarah a variety of scales, whilst on piano, with few very songs. It wasn’t up until a few years ago when she started to see its effects.

“At the time, I didn’t know that she was building a technique within my body and in my voice and my diaphragm, and the system, the way, in which you sing. She was putting the technique that she learned from her teacher, in Italy, she was passing that to me. I didn’t get it. It took a lot of time.

“When I got older, and people would say to me ‘Oh God, you have a really solid technique; you’re able to get up to these notes and that note. How do you do it?’ And, not that I don’t know, I just didn’t realise that during those first five years, they were so important, because I was young. If I had come to her when I was 26, she might have said, ‘Hmmm, it’s late, and there’s a lot of work to still be done,” she explained.

She added that sometimes the audience may not realise that four minutes of a piece can take up to six months’ training.

“It’s all about technique; it’s about building muscle memory in your throat, and all the little muscles in around your mouth, how you place a note. And that is just the beginning, just like getting the engine of a car to work.

“And then you have all the things at the top, like your languages — how many languages can you sing, and so on. I can sing in four or five languages. I can’t speak the language. But if I need to learn a Russian piece, I’ll need to go find someone who speaks Russian, and sit down with them for an hour or two and go through everything perfectly. And then you have to learn the music and the notes, and then you have to know the meaning.”

Once again, the soprano hopes to put her techniques to the test at this week’s competition. This time, the former Castletroy College student has already faced 160 contestants from more than 35 nations.

Ms Shine added that she hopes to one day emulate or equal the achievements of Limerick soprano doyen Catherine Hayes.

“I didn’t realise how big this woman was until I did some research on her.

“This woman was singing for some of the biggest composers of the Romantic era, and not a lot of people know a whole lot about her. I would love to do some sort of project in the future — something to tell her story in a more detailed way. When I did something on her for Culture Night, it was only for 15 minutes, just a little snippet. I would love to be the person to be able to do that, and to carry on her tradition.

She said that her dream performance, for when she is older, is to play the role of Gilda in Rigoletto, written by Italian composer Giuseppe Verdi.

Sarah studied at the Royal Irish Academy of Music, in Dublin, where she has recently completed a BA in Music Performance and a Recital Artist Diploma, studying with Veronica Dunne.