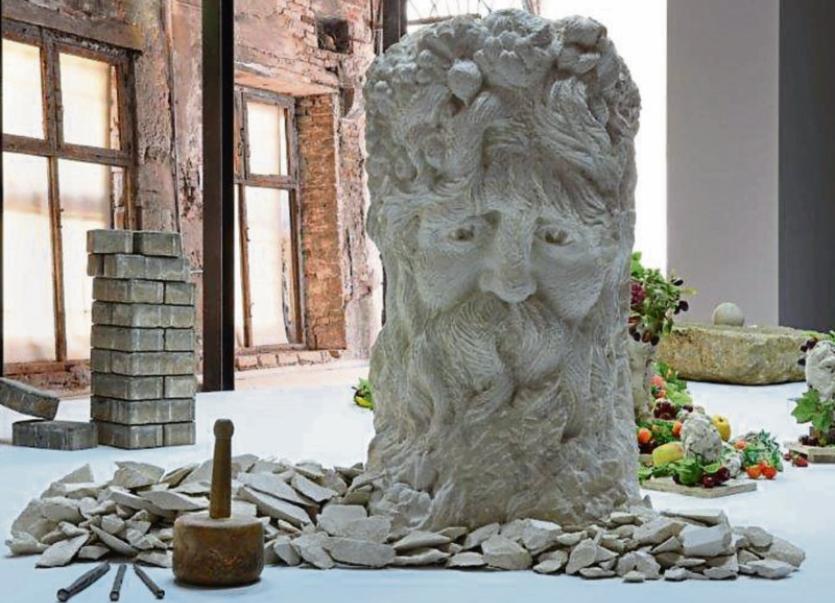 One of the stone carved pieces in Sean Lynch’s exhibition, Adventure: Capital, which opens in Limerick City Gallery of Art this Thursday night and runs until March

AFTER being viewed by more than 400,000 people in Venice, one of the most ambitious exhibitions by Limerick based artist Sean Lynch has come home to the city, as part of a nationwide tour.

The exhibition, Adventure: Capital, will be unveiled this Thursday night in Limerick City Gallery of Art, after it was commissioned for Ireland at Venice 2015, the Irish Pavilion at the 56th International Art Exhibition – La Biennale di Venezia.

Visited by nearly half a million people during the world’s most prestigious visual arts exhibition, Adventure: Capital now begins it national tour of Ireland, starting in Limerick, where it will be opened by Sheila Pratschke, chair of the Arts Council. It will then move on to exhibitions spaces in England and America.

Adventure: Capital traces a journey from myth to minimalism around Ireland and Britain, combining Greek river gods; public art at regional airports; quarries and the art of stone-carving; an abandoned sculpture in Cork; and a traffic roundabout, on a on a storytelling journey that unravels notions of value and the flow of capital through an anthropological lens.

Sean, who is from Moyvane in north Kerry and now divides his time between Askeaton and London, forensically investigates anecdotes, hearsay and half-truths, unearthing marginalised stories that have been overlooked or fallen by the wayside.

He is not an expert on such issues, but merely wants to initiate a conversation with the viewer, he told the Limerick Leader this Wednesday, prior to opening night.

He has also revived pieces from previous exhibitions in this all-encompassing collection, including a photographic look at Bill Clinton’s visits to Ballybunion, not far from his own home village.

The centrepiece of that vignette is the golf ball from Clinton’s statue in Ballybunion, which was believed to be stolen. While the item was recovered, it was never reinstated in the statue and is there for all to view in the City Gallery – behind bullet-proof glass, which was made specially for the piece by Duggan’s glass in Limerick.

Other exhibition pieces include  A Church Without A Steeple (2012, Arts Council Collection), based on the controversy over the construction of Knockanure church, not far from Moyvane. It runs until March.