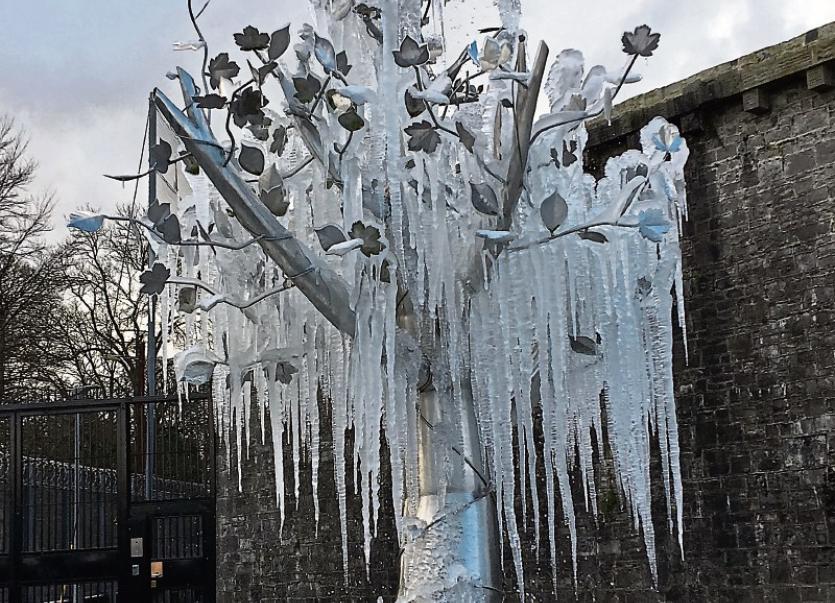 A photo of the frozen water fountain inside the railings of Limerick Prison, Mulgrave Street taken this Wednesday | Picture: Jude Molloy

LIMERICK is bracing itself for blizzard-like conditions and freezing temperatures as Storm Emma and the ‘Beast from the East’ look set to bring the country to a complete standstill.

The revised warning which came into effect at 11pm on Wednesday remains valid until 3pm on Friday.

Schools, colleges, creches, shops and offices across the city and county will remain closed this Thursday and Friday following the issuing of the warning.

Earlier on Wednesday, Bus Éireann confirmed no services will operate in Munster or Leinster on Thursday and that the situation will be reviewed once the status red warning is lifted.

Irish Rail says its services will also be severely curtailed.

Several inches of snowfall are expected between 4pm on Thursday and 12 midday on Friday and members of the public are being urged to stay indoors and to stay off the roads during that time.

Sean Hogan, chairman of the National Emergency Co-Ordination Group (NECG), said Munster and Leinster will will be in full shut down mode from early on Thursday afternoon and that it would be “suicidal” to drive in what are expected to be the worst blizzard-like conditions in more than 30 years.

“If you get driving wind and snow, you may get disoriented and lost very quickly," he warned.

Almost all public events and gatherings scheduled for this Thursday and Friday have been cancelled or postponed while the bad weather is set to decimate the weekend’s sporting schedule.

All court sittings have been cancelled and only essential public services will be operational on Thursday and Friday.

The Health Service Executive says the majority of elective and outpatient appointments have been cancelled but that the Emergency Department at UHL and the Injury Units at Ennis, Nenagh and St John’s Hospitals will operate as normal. The Emergency Unit at University Maternity Hospital Limerick will also remain open.

Limerick City and County Council, which convened its Severe Weather Assessment Team this week, says its 15 gritters will be out covering priority routes that carry nearly 85% of all Limerick’s traffic.

Six snow ploughs are also on standby and will be deployed if necessary.

Troops at Sarsfield Barracks have been placed on standby and will be deployed if necessary.

“Limerick City and County Council continues to advise the public to be vigilant and stay tuned to various media outlets for weather warning updates. The public should make appropriate arrangements with the prospect of deteriorating weather conditions for the remainder of the week and heed all public warnings that may issue over the coming days,” said a spokesperson.