Local life through the lens of a Limerick Leader photographer 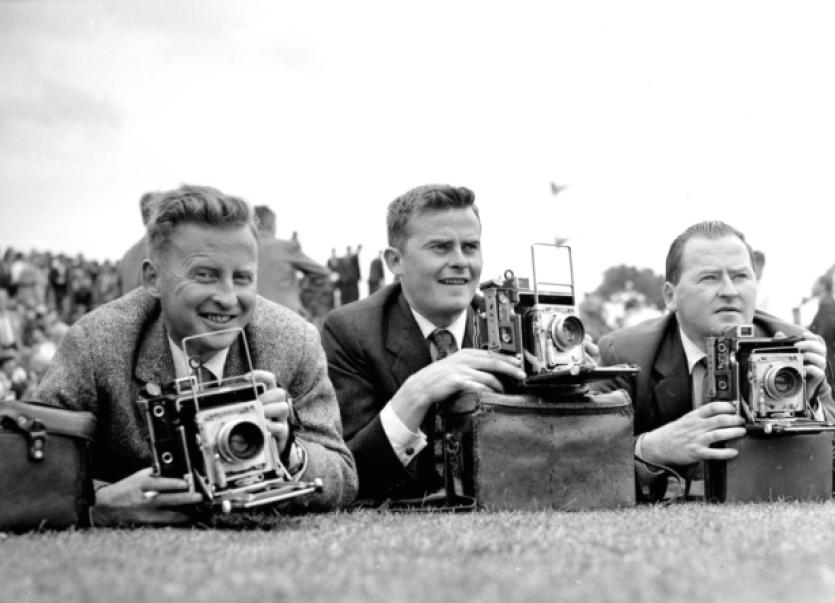 An expert in his field: Donal MacMonagle right, who founded the Leader's photographic department in the early 1950s, with his brothers Harry and Louie

Sixty years after the Limerick Leader’s inception, photography changed the paper forever. Anne Sheridan spoke to some of the greats on life behind the lens and the big picture for the 125 year anniversary supplement

IMAGINE a world without pictures. The very first Limerick Leader, printed on Friday, August 9, 1889, was entirely in black and white, six columns down, across just four pages, without a single image to illuminate the page.

It was a very staid, regimented affair, devoid of colour and that passionate punch that can jerk a reader into reading an article, or the least the opening paragraphs underneath.

Things were to change, however. The Leica came to the market in 1925, the Kodak in 1934 and the Canon in 1936, and the days of the darkroom and the move to digital lay ahead. Slowly, the Leader began to see the value of well taken photographs and they were to bring much colour and drama to the newspaper - both in print and behind the scenes – for decades to come.

When the acclaimed photographer Donal MacMonagle started the Leader’s first photographic department in the early 1950s, Rolleiflexs were the cameras of choice, followed by the Nikon and the Canon. MacMonagle, of the Kerry photographic family who have been in business for a century, would soon be joined by other fine exponents, including John F Wright and Fonsie Foley in the first instance, followed by the ‘new brigade’ – Dermot Lynch and Owen South.

There were stringers and freelancers and part-timers in between, but these five photographers carried the Leader for decades, often producing pictures worth a thousand words.

Indeed, the stories behind them would be retold nearly as often, at times while one of these characters was perched on a high stool in the White House bar, and each time with more enthusiasm and twists than the last.

These halcyon days of photography are still remembered with nostalgia and wistful sighs from some of the younger ‘cubs’ who were part of the Leader’s elite - or a club where “you were almost looked up to wherever you went”, as photographer Dermot Lynch recalled.

In a world free of selfies, and devoid of the easy production of the digital generation, print images were prized and retained a certain mystique when they emerged in black and white, after hours of being mixed with chemicals and rinsed by the solitary maker in the Leader’s darkroom.

“You had a roll of film, with 36 shots on a roll, and you were always told about the cost of it, or were aware of the cost of it, so the aim was to get one or two jobs [photographic markings] out of one roll - unlike digital. It was blind trust, really. You didn’t know was there anything there - or anything good on it - until you developed it,” said Dermot.

“Absolutely, by far. They certainly were in the 1970s, and maybe the 1980s. There was always magnificent camaraderie in the photography department.”

From the ’80s onwards, photographers were expected to cover more ground, “expected to be everywhere”, from Ballybunion to Killaloe and Kilkee, sometimes putting in 16-hour days. However, they also ventured further afield, and appeared to have less qualms the bigger the jaunt.

Dermot flew to Moscow in 1991, on a “marvellous” trip, courtesy of Aer Rianta for St Patrick’s Day and the opening of their duty free, as well as a trip to New Zealand with Shannon Aerospace.

John F Wright, now 65, a member of the Buckley family which owned the Leader for a century, carried his Nikon F with him everywhere. “It was the iconic camera in the 60s, used by a lot of war photographers, and was just an oustanding camera,” he recalled.

He flew not once but twice by Concorde with Air France - and also flew with Pope John Paul, alongside other journalists from Ireland and the UK, which was “absolute, total mayhem.

“A lot of the work could be very mundane, but there was the odd exciting piece. Being on Concorde was quite a highlight, quite something. The second time I was on it, it flew out to Iceland, which only took about 20 minutes, and we came back again,” he said speaking from his home in Jersey.

Cormac Liddy, who worked in the sports and news department of the Leader for 41 years, and was news editor in 1981, recalls a junket closer to home - which is still talked about decades on, because of the creative measures taken to get them. He spent an entire year’s sports budget on sending photographer Fonsie Foley and reporter Fergal Keane to a rugby match in France.

However, it transpired that the pair got swept away by a certain joie du vivre when they touched down in France and forgot to get their press accreditation on the Friday before the match.

“Fonsie took his pictures from the top of the stand, and the resulting images might as well have been pictures of ants!”

On arriving back to Limerick, Fonsie drove to Charleville to pick up negatives from a photographer in Cork, which appeared in the paper the next day, “drawing huge praise from Brendan Halligan (the then editor), who was, fortunately, none the wiser at the time.

He wasn’t alone. John F Wright said it wasn’t uncommon for a photographer to head out to take pictures of a function, only to return hours later and find there was no film in the camera.

Sports fixtures aside, photographers found time to enjoy themselves - perhaps a little too much on occasion - at other outings, the Limerick Show being chief among them.

“On the Thursday of the show, photographers could ease up a little bit as the paper would be out,” said Cormac, “but the Limerick Leader Cup would have to be presented, and invariably each year the call would go out over the PA system. ‘Would the Limerick Leader photographer please come to the stand?’ Generally they were nowhere to be seen.

“One time the call came back from one photographer: ‘They can go and f***ing take the picture themselves!”

Regardless of the merits of respective photographers through the decades, he holds the “modern day” ones out for specific criticism.

“They are utterly incapable of writing a proper caption,” he said.

Fonsie Foley’s son Shane, who too worked for this newspaper for many years in pre-production, recalls the hard graft his father put in over 20 years.

“He could have been covering five or six markings a night, driving out to Foynes, and would then be in the darkroom printing the images until all hours. It had its sociable side, but there were a lot of unsociable hours. I’m nearly 50 years of age, and people still introduce me as Fonsie Foley’s son, and I’m very proud of that.”

While few, if any, of the photographers had many formal training, others with a keen photographic eye were forced to keep their talents out of the spotlight due to NUJ regulations. Among them was Gerry Andrews, who aged 18 started working in the lithographic department of the Leader under Billy Butler, father of current Leader photographer Adrian, who initially began work here as a darkroom technician, a now antiquated title.

“Gerry was a genius,” said Billy, who was trained in the specialised area of photo engraving, of his young apprentice.

Few knew the photographic master Gerry would become, with the images of the Milk Market in the 1970s catapulting him to prominence, with solo exhibitions in the Hunt Museum and the National Photographic Archive in Dublin in recent times.

Gerry got his break, of sorts, when he got a call from Brendan Halligan to cover the fire at Newsom’s in 1972, when every other staff photographer was somehow uncontactable. He climbed up on the roof of the building, while it was engulfed in an inferno, and was left to snap away to his heart’s content, undisturbed by the firemen working around him.

“Brendan Halligan was stuck between a rock and a hard place, but it was one of the biggest fires of the time and there was no one else about,” he recalled.

A full page of pictures was given to his images - sadly without a byline, because of the uproar his unofficial status as a photographer would have caused amid union ranks. John F Wright, he said, was a different sort of photographer, and “had an interest in photography beyond the general news item.

“He started a page called In Camera, to open the Leader to people interested in photography. It was just a page of pictures looking for the unusual, and something different to what would normally be assigned by the news editor. It was such a busy department, with photographers covering every single function that came across the news editor’s desk, running hither and tither.”

John became the head of the photographic department in 1967 when he was “just coming on 18”.

He recalls the bomb threats at Todd’s and walking down a deserted O’Connell Street; a fire at Cruise’s hotel when he happened to be on the spot and his pictures made the RTE news that night, and his first scoop – of eight people floundering in the River Shannon when their vessel sank.

He moved to Jersey in 1988, where he is still taking pictures today.

“Everything has changed now with digital, and it’s a heck of a lot easier. The skill is still there, but not quite as much as before.”