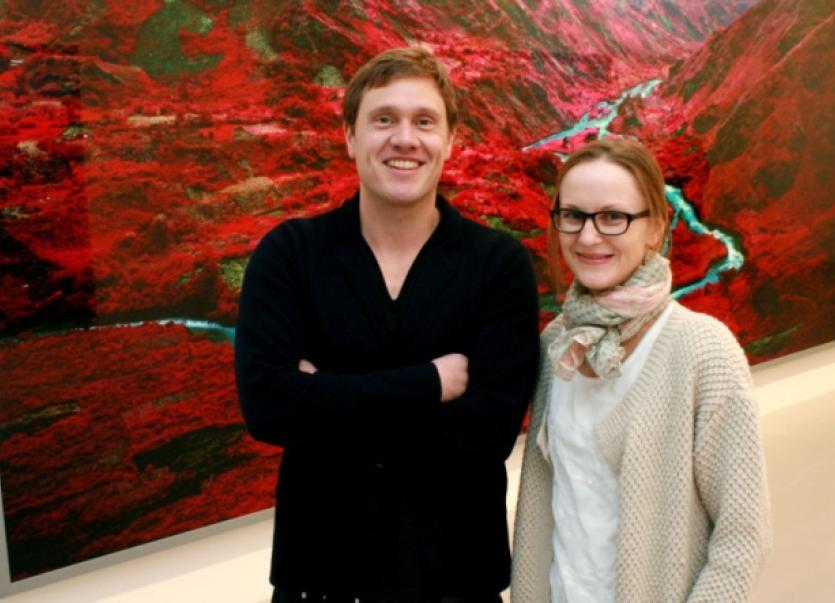 FOR documentarian Richard Mosse, the use of a discontinued military surveillance camera offered the chance to “reveal the unseen, the hidden” conflict in the Congo, which has claimed millions of lives.

FOR documentarian Richard Mosse, the use of a discontinued military surveillance camera offered the chance to “reveal the unseen, the hidden” conflict in the Congo, which has claimed millions of lives.

The Kilkenny-born artist-documentary photographer and filmmaker opened The Enclave in Limerick last week.

The visceral and visual multi-media installation, covering Mosse’s two years in the eastern Democratic Republic of Congo, saw him use a forgotten film form to capture the gritty realities of a country torn apart by war.

Ireland’s entry at the 55th Venice Biennale, where it was seen by 80,000 people, was seen by a further 20,000 in Dublin and is touring to Sydney, Amsterdam and up to 13 cities worldwide as well as Limerick, making securing it a major coup for City of Culture and Ormston House, who are hosting it, along with the space at 6a Rutland Street.

Ormston has been transformed to house it, turned into a black box space. The film, an unsettling piece following various factions of Congolese rebels, captured in blazing hues of pink and purple through the old style movie camera, using 16mm infra-red film, “reveals the things we can’t see”, Mosse explained.

“There have been almost as many people killed there as Hitler killed Jews, but it doesn’t jump into the front page.

“So I was interested in that aspect of the conflict, its problems being communicated, why it has trouble being news?

“It is hard to analyse it, but I can tell you, in my opinion, and I think it is because it is such a complicated narrative. They are all bad guys, there are no good guys. The people are starving, and it is because of a near state of anarchy, there is a power vacuum.

“With this, you can’t really say, what is the answer? It doesn’t really translate, and for that reason it is invisible.”

Mosse and his collaborators - Trevor Tweeten and Ben Frost - were embedded among armed rebel groups in various parts of the Congo, and were present when several battles took place.

Trekking through the bush was one thing, carrying a military surveillance film that must be kept in a freezer was another. A stalled movie production in America ultimately led to him getting his hands on the precious Kodak film.

“It was almost like a myth, I had heard it was out there,” he laughs. “Luckily for me, the fella who was sitting on it, I think he wanted to use it for himself, but his wife had a baby, so all his priorities in life changed.

“Kodak killed it off. Analogue photography is dying off, almost completely gone now, so that is a very interesting moment to be a photographer, particularly a documentary photographer, because the whole relationship to truth shifts.

“The medium reveals the unseen, the hidden, the invisible infra-red reveals camouflage, it reveals the things we can’t see. I just had to bring it to the Congo. The film - the exhibition - is a type of advocacy, basically trying to raise awareness about the situation there, which people have forgotten about.

“It is trying to get people to see, to feel, to listen, to feel it in their heart. It is not a fact based thing, it is not a statistical report. The facts are there if you just care to look, but nobody does. What I wanted to with this piece was for people to feel that, to feel something.

“It is very open ended, I am not hammering people with ‘you should think this, those are the bad guys, you should know that’. It is very non-didactic, it is as open ended as possible.

“Really I want to activate the viewer so that you draw your own conclusions.”

The high profile artist said he “really loved the spaces” playing host to the exhibition in Limerick, part of City of Culture, which was officially opened by Minister of State Jan O’Sullivan and Sheila Pratschke, chair of the Arts Council, last week.

“I had the keys to the city when I came,” he explained.

“I saw lots of huge spaces, wonderful spaces. But this was the most interesting. It looks really top level in there, I have never seen it looking so good.”

Mary Conlon of Ormston House, said “quite a lot of work went into bringing (the spaces) up to this standard”.

“The transformation is incredible, a lot of work went into it. It was three weeks of intensive work,” she said.

“We are known for transforming the place, but this is kind of extreme, and because the windows have been blacked out, people haven’t seen the gradual transformation.”

She admitted that hosting the exhibition was “quite a coup for us”.

“It is a voluntary run space, so to have the reputation and the profile that we could host something like this is a real validation for all the staff there and volunteers, there is a really good team there.”

Ms Conlon admitted that Mosse’s film was “really difficult to watch” at times.

“But the thing that has been extraordinary - I saw it in Venice and Dublin and now here - and it doesn’t get easier with each viewing,” she explained, “the discussion that it generates is very interesting, a lot of people weren’t aware of what was going on (in the Congo) so it does raise people’s awareness.”

In opening the exhibition, Minister Jan O’Sullivan said “to see an artistic representation of the extraordinarily violent situation will challenge us all to look at things differently, and that is what art is about”.

“We are physically reinventing the city as well as ourselves culturally.

“I’m sure huge numbers of people will see Richard’s exhibition here, and it is extraordinarily exciting to have it in Limerick,” she added.

The Enclave runs Tuesday to Saturday - 12-6pm and 12pm-7pm on Thursdays - in both 6a Rutland Street and Ormston House, 9-10 Patrick Street, until May 5.