Draw Out art project using Limerick’s walls as a canvas 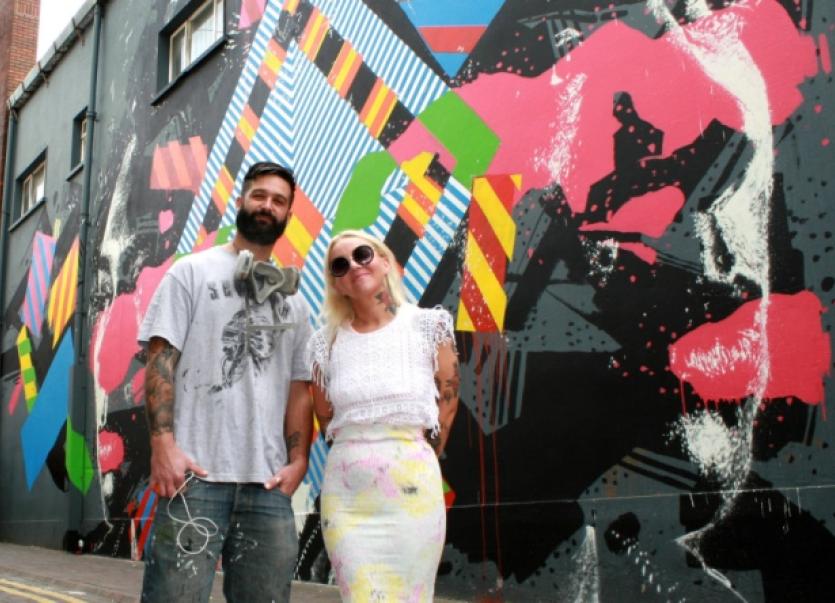 IN THE alleyways of Limerick, on forgotten and often hidden walls, something exciting is happening. An innovative urban art project is using the city as a canvas, creating startlingly vibrant, vividly colourful and creative work in the process.

IN THE alleyways of Limerick, on forgotten and often hidden walls, something exciting is happening. An innovative urban art project is using the city as a canvas, creating startlingly vibrant, vividly colourful and creative work in the process.

Draw Out - Urban Exhibitionists is an ambitious project attempting to transform derelict sites, bringing street artists from around the world to the city.

The plan is to daub 20 massive murals on walls, up to seven of which were being worked on this week. Artists from Australia, New Zealand, Iceland, South America, the US and their counterparts from Ireland will all participate.

The figurehead of the project is Catherine O’Halloran, a youth worker in the city supported by Paul Foley of Limerick City Council.

The project started last year - most memorably with murals beside King John’s Castle, and the incredible overhauling of the Parnell Street petrol station by renowned Irish urban artist Maser.

The transformative urban art project is backed this year by City of Culture and work has started to appear this week on Little William Street, Anne Street, Denmark Street, Ellen Street and Athlunkard Street - and as part of the recent Make a Move festival in the city.

Standing behind Brown Thomas with Askew One - Elliot O’Donnell from Auckland - Catherine explains that “there is an awful lot involved in terms of logistics and it is tough work”.

“Every artist has a very specific way of working and you have to support and facilitate that,” she says.

“But I think that now the work is taking on a life and a shape, and people now recognise what is actually popping up, you start to get some feedback, and that is good. Because then you start to remind yourself just how big an impact this will have on the city, in a really positive way.”

The idea is bring the world’s top 20 artists to Limerick.

“Obviously that is relative to people’s tastes, but I suppose I wanted to look for artists whose work is socially conscious, that was a decision I made early on,” says Catherine.

“They are artists that I am a fan of and that selection process, I put a bit of time into it.

“It is building communities from around the world and is an investment into the city, so that younger kids that are painting can look at this and see that creativity and imagination is limitless.”

Paul Foley, now seconded to City of Culture, says it is “one of the most successful initiatives that we have had throughout the year”.

“It is great to see sites which may have been dead spaces, being brought to life by colour and creativity. The objective is to transform these sites into a more colourful and creative streetscape.”

Mr Foley, who worked in the environment department before moving to a key role in City of Culture, acknowledges the educational element of Draw Out.

“We had some difficulties maybe two years ago in terms of tagging and graffiti around the city, and this is a way of educating artists who are involved in this, that it is better to do it in a structured way,” he says.

“You can do better art as a result, rather than a scribble in the middle of the night, which is vandalism. This can be far more beneficial for artists.”

“This stuff only really makes sense when it sits against the other education and mentorship stuff that we do, because otherwise it doesn’t have much meaning,” she explains. “That is the foundation that runs underneath it and all of the team are local artists, who get to experience what it is like to approach a wall this big.

“That is a creative investment into the young people of Limerick, which we need to start thinking about doing more of.”

Kiwi artist O’Donnell, who collaborated with Maser on the mural to the rear of Brown Thomas, says his time in Limerick has been “really productive”.

“I have spent the whole year at projects just like this, it has been a continual flow,” he explains. “This has been very laid back, typically Irish. I like that autonomy, the freedom to move and do things at my own pace.

“It is really nice to see this big international mural culture really thriving at the moment. It is something I am very appreciative of, because it enables me to travel to different places.”

Fintan McGee from Brisbane, said the reaction to his piece on the Roches Street car park has been “overwhelmingly positive”.

“Most of my work, first of all, is like a reaction to space. A lot of my work deals with environment, climate change,” he explains. “I don’t really use spray paint any more, it is kind of like old school muralism.

“Limerick is a city that has been through some tough times recently and is in a mode of recovery right now and I think people are excited about something that is revitalising and fresh and can make them feel proud of where they live. It has been great.”