Limerick artist puts Taoiseach in the frame over tax 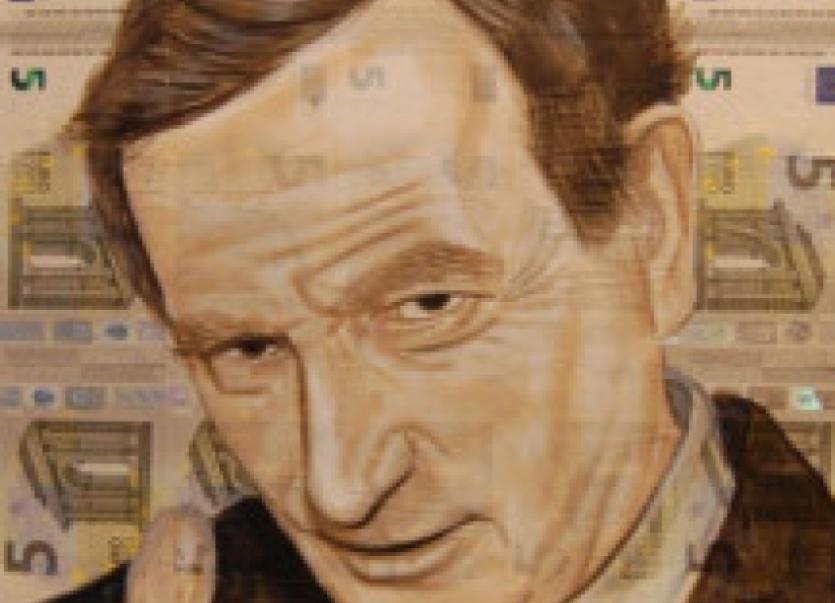 A LIMERICK artist who refuses to pay the household charge and property tax has instead spent €100 on painting a portrait of Taoiseach Enda Kenny by using twenty €5 notes.

A LIMERICK artist who refuses to pay the household charge and property tax has instead spent €100 on painting a portrait of Taoiseach Enda Kenny by using twenty €5 notes.

Ger Kenny, 34, said he feels it is “unjust and wrong” to tax a person’s home when people worked hard to purchase their houses and already paid thousands of euros in VAT and stamp duty. He does not plan to sell this painting, but instead said he wanted to draw people’s attention to this subject.

The Montpellier resident, who built his house in Co Limerick nine years ago, said he and his wife put a lot of money into building their house, which is now in “slight negative equity” and he does not believe they should be “retaxed” in this way.

Mr Kenny said that he’s been lucky to keep his job in IT in Shannon and unlike many others, said he can afford to pay the household charge but has refused to do so because he believes it’s “wrong and immoral”.

“Rather than hand my €100 over to this incompetent Government I have painted this artwork and I hope that people will see it and think about what is going on in this country,” said the well known local artist who has exhibited his work in the Hunt Museum, alongside the Limerick Art Society.

“It is sickening that many people in negative equity who are struggling to pay their mortgage are asked to pay this tax. We have bailed out the same banks that are now knocking at our doors looking for our keys,” he said.

He said his wife agrees with his stance, and they both are resisting requests to pay their household charge, which has doubled to €200, and the property tax of €300.

He said he also received letters from the Revenue Commissioners stating that if he didn’t pay the tax, his employers would be contacted and it would be taken from source, which he found “threatening”. “I’ve no problem paying income taxes, but I’m not willing to pay this. If they take it from source there’s nothing I can do about it,” he added. He said he received a huge reaction when he put a picture of the painting online, receiving over 300 shares on Facebook alone.