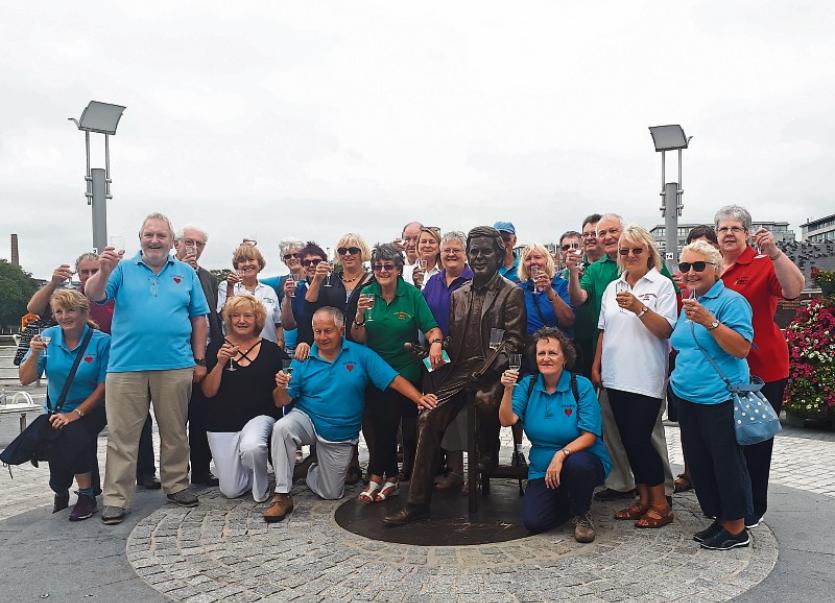 DOZENS of fans of the late, great Terry Wogan were in Limerick this Friday to mark what would have been the TV and radio star's 80th birthday.

Members of the Terry Wogan's Old Geezers and Gals (Togs) fan group descended on the life-size bronze statue at Harvey's Quay to raise a toast in honour of the man, who sadly died in early 2016.

Around 30 people travelled from across Britain for a picnic beside the statue of Sir Terry –  a Freeman of Limerick –  owing to the fact he was born just off the Ennis Road.

Helen Bach, from Hampshire, said: “The Togs have gotten together at various times over the years and it just seemed the best place to come to was to celebrate with the statue. We raise a glass to him every year, but this seemed like an appropriate time as we miss him.”

It is the group's first visit back to the city since the statue was officially unveiled last year.

During this visit, they also met Cllr Kieran O'Hanlon, who was the mayor who unveiled the memorial to the former Eurovision commentator.

“We have a Togs Facebook group with 1,000 members, and at least 300 talk every day about him. We very much support each other and still raise money or Children in Need and have get togethers in his name. He was funny, he was kind, he knew a lot of about music. He supported everything we did. He was just a really nice person,” Helen added.

On the menu this Friday were bananas, crisps, fruit, cake, prosecco, sparkling water - as well as cocktail sausages - or “snorkers” as Sir Terry preferred them to be called.