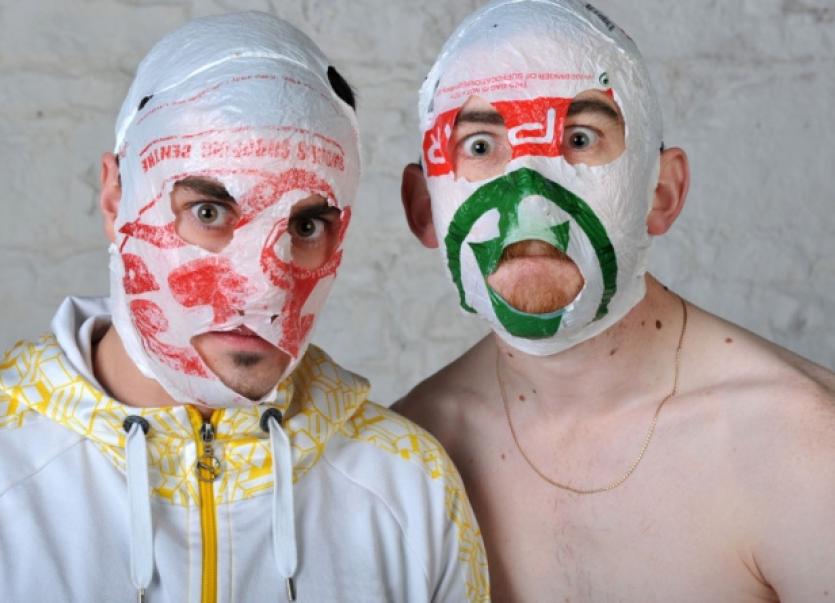 THE Rubberbandits are continuing an all out comedy assault on UK television, with news that ITV has ordered a second series of their anarchic game show.

Six more episodes of The Almost Impossible Game Show, voiced by the plastic bag wearing comedians from Limerick, have been filmed and will be aired on ITV2 in January.

The series has been a ratings winner for ITV and the Bandits, who provide hilarious commentary as contestants put themselves through seemingly impossible tasks, with, as the programme makers say, the duo offering “their own bizarre, twisted take on the action as the contestants make their way through the show”.

Blind Boy Boat Club claimed, with his characteristically outlandish and intelligent wit, that the show was “a probing exegesis of the human condition, which challenges traditional boundaries of societal interaction via the combined mediums of lycra and falling downing”.

“We have no doubt that it will be shortlisted for a Turner Prize, as a BAFTA is not an appropriate mantle of endowment for this work of vital art,” he added.

The show is made by Endemol Shine – producers of Total Wipeout – and sees contestants attempt impossible tasks, so difficult that they are given 50 ‘lives’ just to complete a handful of them.

Think challenges like attempting to put on a pair of trousers while on a treadmill, or cycling a tiny bike along an balance beam and you will get the idea. It sounds like a concept dreamed up inside the warped minds of the Rubberbandits themselves.

The Rubberbandits already have sound pedigree on UK television, having starred in a series of episodes for Channel 4 in 2012, a pilot for which was produced in Limerick.