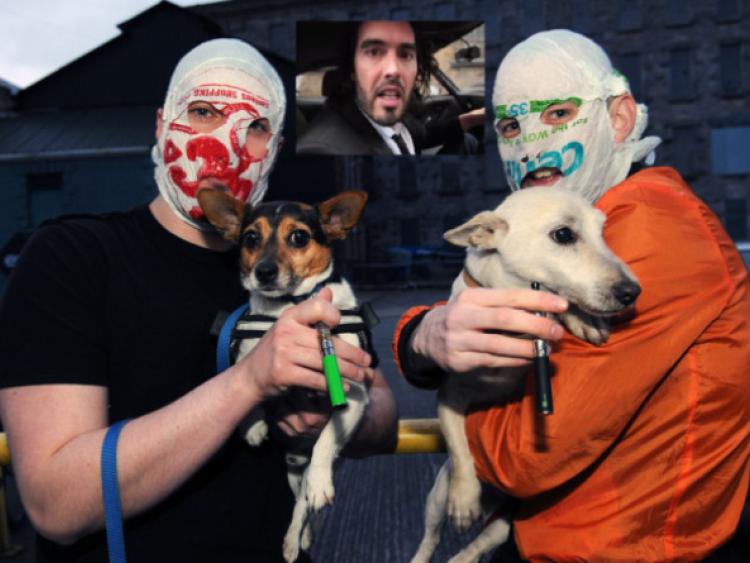 THE Rubberbandits and Russell Brand bonded over a shared love for dartboards and have no interest in a push for the Christmas No 1 slot.

THE Rubberbandits and Russell Brand bonded over a shared love for dartboards and have no interest in a push for the Christmas No 1 slot.

The plastic bag-wearing duo teamed up with actor and comedian Brand to release a parody on Blur’s hit song Parklife this week, which has clocked up over three million views online since Monday.

Music for the song, sung by Russell and the ‘Bandits, was performed, produced, mixed and mastered by the Limerick duo, who performed at Brand’s book launch in London recently.

Speaking exclusively to the Limerick Leader, Blind Boy Boat Club of the Rubberbandits said that the collaboration was a chance one and that the focus would soon move to water charges.

“One day we bought a beautiful model dartboard from the 1970s made from birch, with stained leather embroidery. A really nice piece. Anyway, when went to collect it, lo and behold, Russell Brand answers the door,” said Blind Boy in his only print interview since the video was released.

“Turns out he was as passionate about collecting dartboards as we were. We hit it off from there and a dartboard-based friendship developed. After a while we eventually told him that we make music.”

“It was just a bit of craic - he did the video and I did the music.

“The first thing he is doing is coming over with a jackhammer and taking up the water meter from the front of my house.”

The parody is apparently a nod to Brand’s own political campaign and features lyrics such as: “Verbal dexterity plus estuary accent is what leads to a parody of Parklife / But words used efficiently can be a dangerous tool that slices through propaganda like a Sharp Knife.”

“Goes everywhere on a bus and starts crying when anything about the D-Day landings in Normandy comes on the television.

Asked about the meaning behind the video, the Rubberbandit said that was for “YouTube intellectuals to decide as they work towards a concise dialectic in the comments section”.

“Most of what he says makes sense. He ticks all the right boxes when it comes to deconstructing power. Chomsky, Naomi Klein, Marty Morrissey, Roland Barthes,” he added.

Paddy Power is taking bets on the song surpassing the amount of hits gleaned by the Bandits’ Horse Outside, which has nearly 13 million views on You Tube.

“The other viral phenomenon is Ebola, so it could be worse,” said Blind Boy of the viral video.

“We have no interest in Christmas number one – please download it illegally, take it straight from You Tube, we don’t want your money,” he explained.

“Paddy Power is a clever boy, he puts out bets like that because he gets loads of free advertising.

“Childline are facing a problem that they are closing down their lines from 24 hours to 12 hours - instead, donate to Childline and don’t be worried about silly bets.”