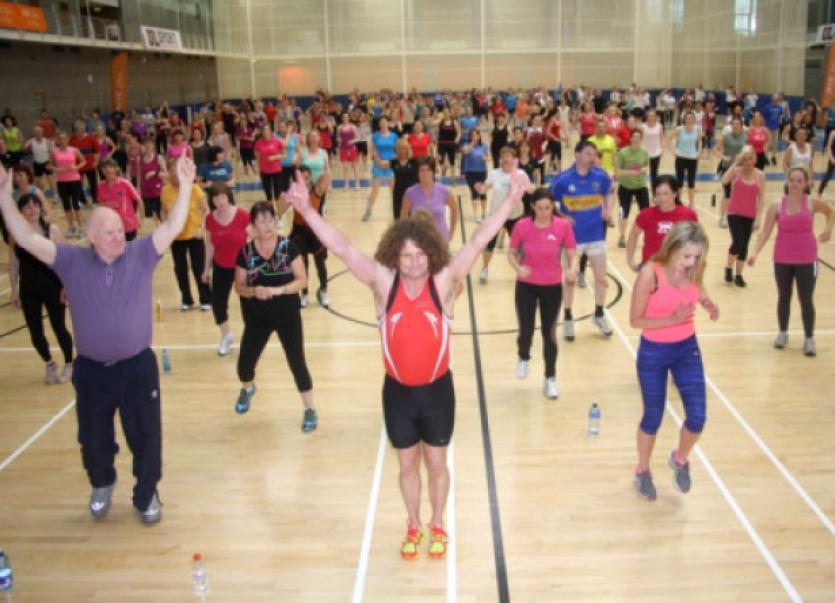 HUNDREDS of lyrca-clad women - and men - took part in one of the biggest mass participation sports in the country in the UL Sports Arena this Thursday morning.

HUNDREDS of lyrca-clad women - and men - took part in one of the biggest mass participation sports in the country in the UL Sports Arena this Thursday morning.

The world record attempt for having the largest number of people in a fitness class was led by RTE 2fm breakfast radio presenter Hector Ó hEochagáin, and the inimitable local fitness trainer Richie Clifford, and his daughter Joanna.

“There’s no lycra left in Limerick,” said Hector, as he broadcasted live from the Arena, and praised the university’s facilities as “fantastic”.

Mayor of Limerick Gerry McLoughlin was among those taking part, while Hector himself flexed his muscles in between broadcasts.

Munster and Ireland rugby player Keith Earls said it was “unbelievable” to see so many people taking part in the class at 8am.

Apart from keeping in shape, Keith told listeners about the positive benefits of exercise and mental health.

“If you train before you go in to work it completely changes your day and makes you feel brilliant about yourself,” he said.

“Wouldn’t it be great to see Paul O’Connell and all the boys here in a class with Richie,” said Hector, prodding Keith about who on the squad would look good in lycra.

“I’d day Donncha O’Callaghan is big into his lycra,” he said with a laugh.

The football manager of Limerick FC, Stewart Taylor, said it was an “unbelievable” scene to see so many people in the Arena.

“Everyone has smiles on their faces and that’s what it’s all about,” said the Glaswegian.

Hector said the reaction to the show was “unbelievable” with texts, calls and texts coming in from people all across the country.

In between all the current, high tempo dance tracks played throughout the hour, Richie had one special request, harking back to a different era and performer from Mullingar.

“I never thought I’d hear Joe Dolan played in an aerobics class,” laughed Hector, above the sounds of You’re Such a Beautiful Woman.

The world record attempt has yet to be verified by the Guinness Book of World Records.

Richie, a grand-father of one and father of four, leads two classes each night, from Monday to Friday, with up to 180 people at a time.

The former international runner has since been dubbed the Mr Motivator of Ireland, saying he “lives for exercise”. The pair met after he appeared in the RTE reality bites series, which featured an episode on gyms around the country.