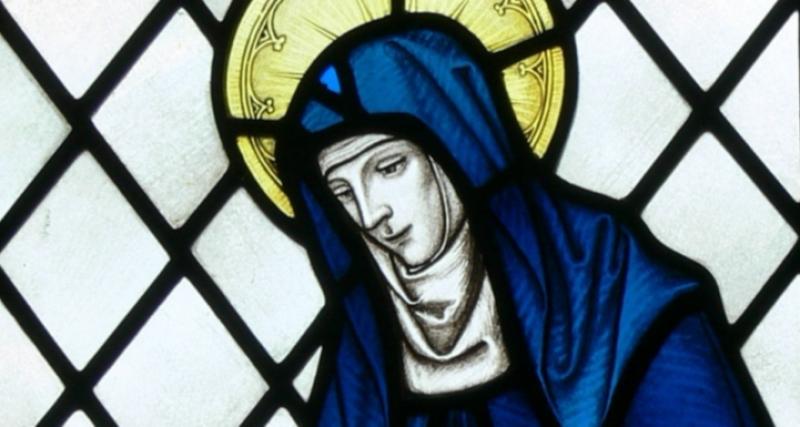 Along with being the patroness saint of Ireland St Brigid is also patroness of poetry, learning, healing, protection, blacksmithing, livestock and dairy production

SAINT BRIGID’S Day in Irish folk tradition was the first day of spring.

February 1 was also known as the start of the farmer’s year. It is the festival of Ireland’s venerated and much-loved second patron saint who is also the patroness of cattle and of dairy work.

Brigid was born in Faugart, Co Louth in 450 AD, and she was the founder of the first monastery in County Kildare.

Her father was a pagan chieftain of Leinster called Dubtach, and her mother was a slave woman called Brocessa. Her name Brigi is Celtic for strength or might.

Saint Patrick inspired her to deepen her faith and to spread the word of God. Saint Brigid is also known as Mary of the Gael or Muire na nGael (Our Lady of the Irish).  She is one of the patron Saints of Ireland along with Saint Patrick and Saint Columcille.

When she was young Saint Brigid wanted to join a convent, however her father took a firm stand and insisted that she marry a wealthy man he had promised her to.

The story goes that she asked God's help to take away her beauty so that the man wouldn't want to marry her.

Her wish was granted, and her father relented, and she was allowed to enter the convent. Not only did her beauty return but apparently, she became even more beautiful than ever.

She called on God's help again to convince her father to give her land in Kildare to set up a convent. Her father said that he would only give her as much land as her cloak would cover. With God's help, the cloak grew to cover acres of land.

Then & Now: ‘You gotta know when to hold them’ - Tom Aherne

Sean O’Suilleabháin in the Journal of the Royal Society of Antiquaries of Ireland wrote: “The main significance of the Feast of Saint Brigid would seem to be that it was a Christianisation of one of the focal points of the agricultural year in Ireland, the starting point of preparation for the spring sowing.

Every manifestation of the cult of the saint (or of the deity she replaced) is closely bound up in some way with food production, and this must be the chief line of approach to a study of the spring festival.’

A relaxation of the rigors of winter weather was expected at this time, for according to tradition, the saint had promised:

Gach ‘re lá go maith
O’m lá-sa amach
Agus leath mo lae feinigh
Every second day fine
From my day onward
And half of my day.

The farmers now hoped for good weather to speed the spring ploughing and digging, to symbolise which many of them turned a sod or two in a tillage field.

Weather signs were carefully noted and the wind direction on the eve of the festival betokened the prevailing wind during the coming year. The festival day should show signs of improving weather, although an exceptionally fine day was regarded as an omen of poor weather to come.

To see a hedgehog was a good weather sign, for the hedgehog comes out of the hole in which he has spent the winter, looks about to judge the weather, and returns to his burrow if bad weather is going to continue.

If he stays out, it means that he knows that mild weather is coming. Rain in February, however, was not unwelcome as it softened the soil and brought an early growth of grass. Proverbially a rainy February gave token of a fine summer.

The lengthening day too was welcome to people whose artificial lighting was limited. ‘On Saint Brigid’s day the saying ran, ‘you can put away the candlestick and half the candle.’ It was a day of stocktaking in household and farmyard. The housewife examined her store of meal, salt bacon, potatoes and other food to make sure it was lasting well and to see how strict her economy must be until stores could be renewed.

In the same way the farmer examined the store of hay and other fodder and decided how it should be portioned out to the animals.

In places certain kinds of work were prohibited on the feast day, and the inhabitants of parishes dedicated to the saint usually kept the day as a holiday and did only such work as was strictly necessary. In some places any kind of work which required the turning of wheels, such as carting milling, and spinning was carefully avoided.

In places in Kerry and Cork dressmakers refused to operate their sewing machines, and in a few places ploughing and smith work also came under the ban.

On Saint Brigid’s eve every farmer’s wife in Ireland made a cake and the neighbours were invited. Butter that was churned that day always formed part of the meal and the madder of ale and the pipe went around, and the evening concluded with mirth and festivity.

It was generally believed that the saint travelled about the countryside on the eve of her festival bestowing her blessing on the people and on their livestock.

There is a lovely story in the old schoolbook ‘’Peig’ on how February 1 was fixed as her feast day. The legend tells us that the Holy Family was being pursued by Herod’s soldiers. In order to protect them Brigid dressed up as a simpleton with all kinds of light shown on her head.

The soldiers were distracted as a result of this display and began to follow Brigid, allowing Mary Joseph and Jesus to escape in the confusion. Mary rewarded Brigid by proclaiming that her feast day would come before her own and this is why she is honoured on February 1.

Brigid dressing up like this may have led to the old custom of people going from house to house on the Biddy with the ’Briedeogs’.

Saint Brigid's Cross (Cros Bríde) is the most common symbol connected with the saint. The most usual was the diamond or lozenge shaped ones made of straw, rushes, or osiers. The cross was hung in the house and in the cow byre, to protect the family and the cattle.

The crosses are not as popular at present, but some primary schools show their pupils how to make them. They can still be seen in some shops catering for the tourist industry where they are sold as souvenirs of symbols of Ireland. A version of the cross was to be seen on RTE 1 during the early years of Irish Television.

One of the earliest references to the cross recalls its power to protect the house and its occupants from fire. The following lines were often quoted in olden times.

Saint Brigid’s cross hung over the door which did the house from fire secure
As Gillo thought, O powerful charm to keep a house from taking harm
And though the dogs and servants slept by Brigid’s care the house was kept.
We will continue her story in the next column.