Then & Now: Bumper issue of magazine is well worth a good read 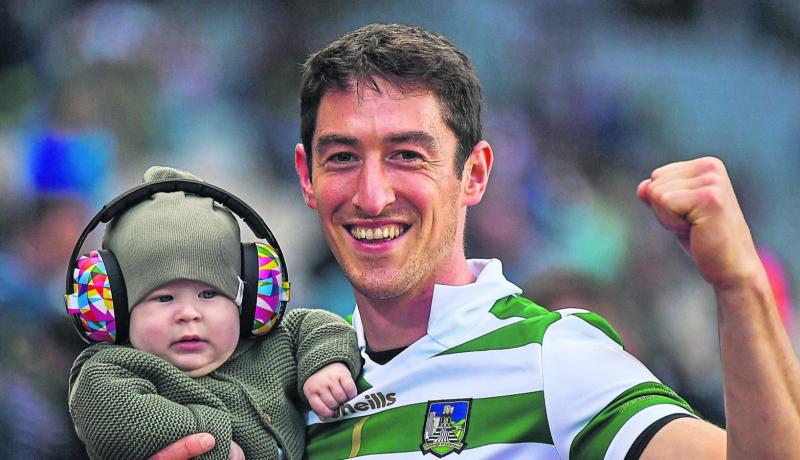 2021 was a great year for some: Limerick goalkeeper Nickie Quaid and his six-month-old son Daithí after the All-Ireland semi-final in Croke Park. Quaid is interviewed in the latest edition

THE WINTER edition of the Green and White magazine is a special 25th anniversary issue of 80 pages.

The joint editors are Ciarán Crowe, and Joe Lyons, and it was first published in 1996.

This is issue no 74 and a smiling Cian Lynch with young fans celebrating Limerick's Liam MacCarthy Cup win of 2021 adorns the front page.

The front covers of previous issues of the magazines feature on the back page.

The joint editors in the throw in page recall the first issue which was black and white and contained 16 pages.

Limerick were after losing two All-Ireland finals in the previous three years, but hopes were high that the Liam MacCarthy Cup would be won soon. How different it is now for readers in 2021, with Limerick hurlers All-Ireland champions for the third time in four years.

Over two pages the story of the Green and White magazine is told in words and photos. From humble beginnings to award winning days is a tremendous success story.

Over the 25 years there were a lot of dull days for Limerick GAA, but the magazine was a shining light three times per year. The editorial policy of the Green and White is: (1) to promote the aims of Cumann na mBunscol Luimneach (2) to celebrate good news in the world of Gaelic games in Limerick (3) to leave a reliable record of events for future generations.

Ten years ago, in 2012, Brian Carthy of @RTEgaa was introduced to The Green and White. He has been a fan ever since pic.twitter.com/TvQFKqeOxu

In this bumper issue Nickie Quaid is interviewed by Paul O'Connor 6th class pupil in Patrickswell NS who receives interesting answers to his searching questions.

Colin Ryan from Pallasgreen won the 2021 All-Ireland Poc Fada in the Cooley mountains and he is pictured receiving the cup after his victory. A history of the event which commenced in 1961 is included.

Vincent Godfrey from Limerick was the first winner and Pat Hartigan 1981, 1983, Tommy Quaid 1991, and Albert Shanahan 2001, 2005, were other Limerick winners. Martina McMahon finished in the top five of the lady’s camogie competition.

The ladies football focus is on Amy Ryan from the Oola club. Sports broadcaster Valerie Wheeler from Cork is interviewed about sport broadcasting her radio show on SPIN South West and her future ambitions.

In the ‘meet’ page Kevin Denihan from the Galbally club and the manager of the Limerick minor football team answers the questions.

Photos from their matches as they progressed to the Munster final feature. In the camogie section the spotlight is on Mairéad Ryan Knockainey and Rebecca Delee Newcastle West. Camogie continues to gain in popularity with increased attendances and media reporting.

There is a page of facts and photos about the 1921 All-Ireland champions Limerick who won their All-Ireland in 1923 due to the trouble years in Ireland.

Declan Hannon's All-Ireland winning 2021 speech is printed plus photos of the management team. All the Limerick 2021 Munster, All-Ireland and National League statistics are published, which is very informative and a great addition.

Point Taken recalls the Limerick senior hurling kitman Ger O'Connell who raised funds for the Daughters of Charity by walking one kilometre on the roads around his native Pallasgreen for every point Limerick scored on their way to winning last year's All Ireland senior hurling championship. In total the walk over 141 kilometre's raised € 15,414.00.

The Lundon Eye recalls the 2021 All-Ireland hurling final and the programme that was published for it. Liam O'Brien over two pages writes about the 1984 National hurling league final which was between Limerick and Wexford.

It was played in April in Thurles, and he was only 9 years old and yet to witness a Limerick team winning a major title. Liam writes about the journey with his family the match and celebrations following Limerick's win.

The Limerick All-Ireland winning captains series continues with Part 4 concentrating on Timmy Ryan from Ahane, who was the second Limerick man to receive the Liam Mc Carthy Cup.

Paul Anglim is the author of the Askeaton/Ballysteen club history which was launched in the autumn. He includes part 1 of an article titled The Rise and Fall of the GAA in the Thomondgate Area.

Spotlight on Limerick supporters gives an insight into what makes them such super supporters. The four who are featured are Anthony Brosnan from Garryowen, Hammy Dawson Garryowen, Aideen Fitzpatrick Lynwood Park and Majella Scanlon Killeedy.

In Cumann na mBunscol News, the future is still uncertain when the action will return after another year's break. A national week was held to celebrate 50 years of Gaelic games in Primary schools.

Events were held in all four Limerick divisions to mark the anniversary and photos from schools are shown. Joe Lyons joint editor of the Green and White was elected Chairman of the National Committee Cumann na mBunscol. He described it as a great personal honour.

Liam O'Donoghue, John Flanagan and Ger Hegarty are featured in the vital statistics section. The editors are interested in publishing Limerick footballers (men and women) and camogie players in future issues. If people can help with information, they are asked to contact the magazine.

In the Snippets News there are five pieces, Kevin O'Brien from Patrickswell took charge of the All-Ireland Premier Junior Championship Camogie final between Armagh and Wexford. Aaron Gillane presented a set of jerseys to his local school Patrickswell.

Liam Dillon retired from Scoil Chriost Rí, Caherdavin after 45 years as a primary School teacher. He was a great servant of Cumann na mBunscol. Michael Fitzgerald wrote a history of Gaelic games in Herbertstown NS.

The current issue is another fine publication, with lots of interesting news, poetry, great photos, puzzles, cartoons, crossword and in of the post to satisfy all readers.

It is enhanced by Ballyhahill Den O'Brien's photography from the All-Ireland final day in Croke Park and the many others whose photos are included.

The magazine is distributed to all the local primary schools and is also available in certain shops in the city.

Continued success to Ciarán and Joe.