Then & Now: Pattern Day in the parish 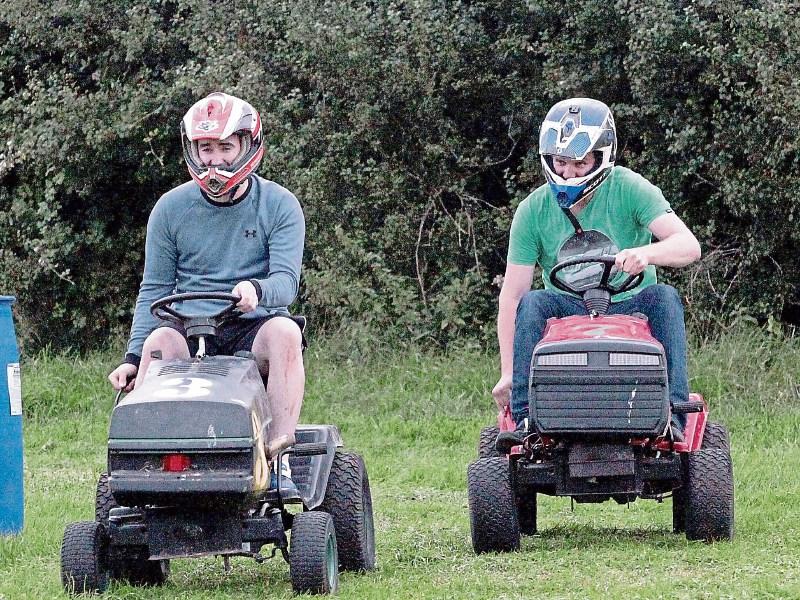 The word pattern is derived from the Irish Patrun or English Patron and, in the old days, most Irish parishes had a patron saint. Pictured is the lawnmower race at the 2018 Barrigone Pattern Day

PATTERN DAY was a most important event in the majority of parishes around Ireland in former times. It was the day the local saint was celebrated by a ‘pattern’ which was known as Pátrún, in Irish and Patron in English.

It has been said that these religious ceremonies were held at the parish church under the direction of the clergy.

This was ended by the widespread confiscation and destruction of churches between the years of the 1540s and the 1690s when Ireland was devastated by many wars which were mainly of a religious character.

By 1700 not many parish churches remained in Catholic hands and organized ceremonies had almost entirely disappeared and Patron Day ceremonies survived as gatherings of the local people at the ruin of the local church, monastery or more frequently at the holy well.

The festivities began with religious devotions at the shrine of the saint which consisted of the reciting of a number of Rosaries, Our Fathers, Hail Mary’s, and a certain prayer associated with the particular well. The movement around the well became known as ‘rounds’ in English and Uras in Irish.

The devotees walked around the shrine a number of times reciting certain prayers, or kneeling at appointed fixed places, often marked by large stones or rocks with the ritual varying somewhat from place to place.

Another part of the devotion at the holy well was the drinking of its water, and the bathing or washing of sores and affected parts in search of a cure. The different shrines were famed for their cures of different ailments.

The making of the rounds was said in thanksgiving for past favours given and also for upcoming events. Certain wells were famous for curing people who were blind or lame, and the cloths to wipe the eyes after washing was hung on a bush nearby as an offering. People who were setting out on a dangerous journey also did the rounds for a safe return.

The traditions, rituals, legends and customs associated with holy wells and similar shrines are very numerous and varied and many of them are a lot older than the religious calamities mentioned above. They may be older in some cases than Christianity itself.

It is clear that the disappearance of formal public ceremonial among Catholics in Ireland as a result of the religious wars, and the Penal Wars, gave added importance to the gatherings of the laity at these Patterns. In the absence of clerical direction, it gave greater freedom both in unorthodox forms of devotion and in secular amusements.

The Synod of Tuam (the year of the Restoration of Charles 11, when the rigours of Cromwellian persecution of Catholics were being relaxed) decreed as follows: “Dancing, flute–playing, bands of music, riotous revels and other abuses in visiting wells and other holy places are forbidden, especially at times of indulgence”

The regulation goes on to say that on no account must a visit to one of these shrines be regarded as a substitute for attending at Mass on a holiday of obligation. We have moved on a lot from those days and the present day ceremonies are again under clerical direction and are holy and peaceful.

The month of August was a very popular time to hold the Patterns and August 15 is one of the recognized Pattern Days.

Barrigone Blessed Well is in the townland of Craggs, and the parish of Knockpatrick midway between Foynes and Askeaton, is one of the most popular. A number of legends are associated with the well and the healing qualities of the water which is the probable reason for the widespread popularity that it has attained on August 15.

The story is told that if during a storm pebbles taken from it are thrown against the force of the gale the storm will cease. Another story is told of a non Catholic in derision who took a blind horse to the well. The horse was cured but the owner was rendered blind.

Patrickswell derives its name from a well dedicated to Saint Patrick, and Kevin Danaher wrote the following about it: ’The well was open formerly with a great elm tree standing beside it. It was much venerated especially on March 17.

The water cured sores, toothache, and other pains and also cattle, and it was sprinkled on crops and churns. Rags, medals, and drinking cups hung on the tree, and devotions ceased about 1890.

I will conclude for now with a few lines by ‘’Curran the Poet’’ about Colmanswell at the end of the Pattern which is celebrated on October 29.

I love each bower and earthly flower that encircles Colmanswell,

I love the soil where true men toil beside its blessed well.

Sending postcards and receiving them was a big thrill when I was growing up in our little corner of Limerick. It was done by people when they went on holiday around Ireland or abroad.

They were a nice gesture and a reminder that people were thinking about you, as they enjoyed their holidays. They were readily available and easy to send and people with small and neat writing could get great value for the price of the stamp.

I am sure a post card was also welcomed by the postmen as it brightened up their day when they could see what was on it.

Postcards were a source of conversation amongst the neighbours dropping in for a chat or the loan of some object. Postcards were often sent to people to create mischief with a guess who at the end.

People of my era will recall the saucy cards with the well chosen messages that were for sale around the seaside resorts. People get much enjoyment from collecting postcards, and some have made a business from buying and selling old and antique cards at auctions around the country.

We owe a lot to William Lawrence for his wonderful collection of postcards featuring the towns and villages of Ireland over a century ago. John Hinde took the picture postcard a step further introducing iconic colour images that defined an era in Ireland through the 1950s and 1960s.

One of my favourite cards is the man on the donkey car bringing his milk to the creamery with a background of wynds of hay and clear blue skies. Instant communication in recent years has replaced the postcard which often did not arrive at its destination until after the people had returned from holiday.

Cards are still being sent but at a smaller rate, by people entering competitions, and seeking requests on Radio Stations etc. The recent rise in postage stamps will see a further decline in postcards now more the pity as they added excitement and colour to our young lives.

The joy from a card received leaves a lasting impression unlike a message that can be deleted in an instant.

Enjoy your holidays and remember to send a card to somebody special this year.