Then & Now: The terrible incident in Gortnaglanna 100 years ago 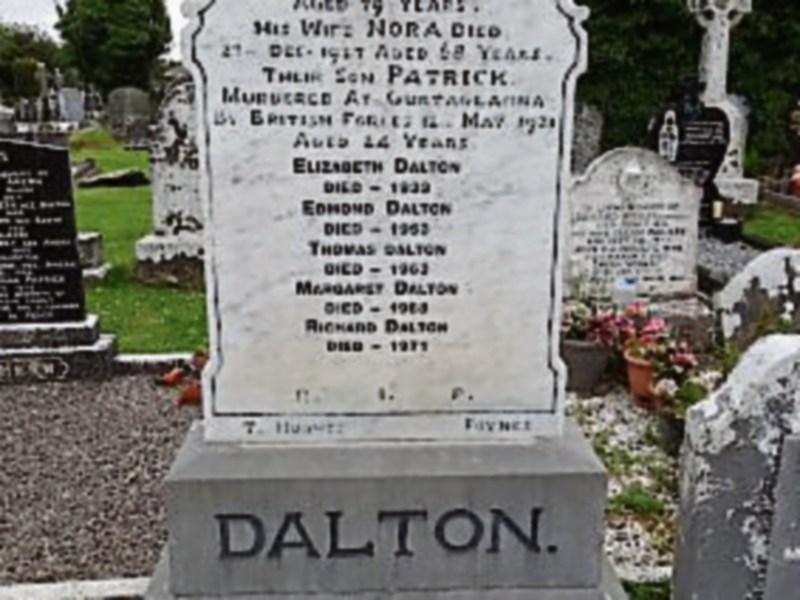 WEDNESDAY, MAY 12 is the one hundredth anniversary of the shooting of three young men at Gortnaglanna near Knockanure in North Kerry. The brutal execution of Flying Column fighters Paddy Dalton, Jerry Lyons and Paddy Walsh by the Black and Tans is still recalled and spoken about.

A number of ballads were written about the event which helped to keep the incident fresh in the minds of people, and plans were in place to mark the centenary, but had to be postponed due to Covid restrictions. West Limerick was associated with the atrocity because Paddy Dalton was from Athea a few miles from the Kerry border.

Growing up we heard the older generation speak and discuss this terrible incident from the dark days of our history. Relations of Paddy Dalton lived around my locality which created more interest about it each May when commemorations were held at the roadside monument. Paddy Dalton was born on February 23, 1886 in Coole Athea, son of Michael and Hanora White. He was educated locally and went into employment as a hardware assistant in Listowel. Paddy became a member of the North Kerry Brigade of the Irish Republican Army (IRA), and participated during the War of Independence (1919–1921).

The months of April and May 1921 were particularly violent in the seven-mile stretch between Listowel on the west and Athea, County Limerick, on the east. Sir Arthur Vicars, fired for negligence as Ulster King of Arms after the theft of the Irish crown jewels in 1907, lived at nearby Kilmorna House. The IRA believed that he was informing on their activities to the British army, and on April 7 they ambushed a group of soldiers returning to Listowel after a visit to Kilmorna, and an IRA man Mick Galvin was killed.

On April 14, about thirty IRA men raided Kilmorna House. According to a report in the Irish Independent the next day, the republicans escorted Vicars from his bedroom while he was still wearing his dressing gown and shot him outside the house in the garden. Around his neck was a note: “Spies and informers beware; the I.R.A. never forgets.” The IRA then burned the house. As a result the Black and Tans were on the lookout for revenge and tensions were high as people were afraid of reprisals. This led to the shooting dead of three unarmed men and the lucky escape of a fourth.

A troop of Black and Tans were travelling out from Listowel towards Athea when they arrested four young unarmed men in Gortnaglanna. Prior to this the barracks in Listowel had been burnt out and the troops, heavy with drink and bent on revenge decided to execute the young men. The first to be shot was Jerry Lyons along with Paddy Walsh and Paddy Dalton. When this happened, Con (Cornelius) Dee decided, as he was going to be shot anyway, to make a run for it. He did, and almost immediately took a bullet in the thigh but managed to keep going. He ran for about three miles and survived. He was never recaptured but remained in hiding until the Truce. All three of the other men were shot on the spot. Today a memorial stands by the roadside where the three died during Ireland’s struggle for independence.

According to newspaper reports, the bodies of Dalton, Lyons, and Walsh were brought first to the Listowel police barracks and then to Tralee. On May 18, the Irish Examiner wrote that they were then returned to Listowel by train. Many people along the route shut their window and door blinds in sympathy, “but the police immediately after compelled them to raise their blinds and re-open the doors on penalty of having them burst in forcibly.”

Paddy Dalton is buried with his family in the old Temple Athea graveyard. His stone reads, “Murdered At Gurtaglanna By British Forces.”

The most famous ballad of the events is Bryan Mac Mahon’s “The Valley of Knockanure”, written in 1946. In memory of Jeremiah Lyons, Patrick Dalton and Patrick Walsh, murdered by Crown Forces at Gortnaglanna, Co. Kerry on May 12, 1921.

You may sing and speak about Easter Week or the heroes of Ninety-Eight,

Of the Fenian men who roamed the glen in victory or defeat,

Their names are placed on history’s page, their memory will endure,

Not a song is sung for our darling sons in the Valley of Knockanure.

Our hero boys they were bold and true, no counsel would they take,

They rambled to a lonely spot where the Black and Tans did wait,

The Republic bold they did uphold though outlawed on the moor,

And side by side they bravely died in the Valley of Knockanure.

In 1979 Leo Finucane a 27 year old farmer's son from Gale Bridge, Moyvane recalled the events in a documentary film. He made the film almost single-handed during an eight month period with a cast of 57 from the Knockanure area. The two hour film cost more than £ 2,000 to make. He shot thousands of feet of film on his 8mm cine camera, which had a sound unit attached. The cast bar one (Athea) came from the Knockanure area, and they included farmers, garage men, factory workers, and from many other occupations. It was filmed on location and much of it was made at the actual places directly connected with the killing.

The filming took place on Sunday's, Holyday's Bank Holiday's, and most evenings from 7-9pm. Leo used about 70 reels of film which he edited himself.

The scripts were typed by his wife and the main actors learned their lines as they went along. There were a number of indoor scenes which were filmed in old country thatched cottages.

My local church in Carrigkerry was one of the locations used for the film, as Athea church had been modernised. Fr John Connors gave permission, and he recited part of the mass in Latin to facilitate the film maker.

The film titled "The Gortnaglanna Tragedy" was shown in the Con Colbert Hall Athea on November 9, 1979, and at other parish halls around the locality. Another film about the events was made in 2009, and a couple of books have been written recently to mark the 100 anniversary. Captain Paddy Dalton’s name is kept alive in Athea with the naming of Daltons Terrace on May 16, 1971 on the 50th anniversary commemorations a plaque was placed on the corner house. I will conclude with the final verse of the song.

Oh, Walsh and Lyons and Dalton brave, although your hearts are clay,

Yet in your stead we have true men yet to guard the gap today,

While grass is found on Ireland’s ground your memory will endure,

So God guard and keep the place you sleep and the Valley of Knockanure.