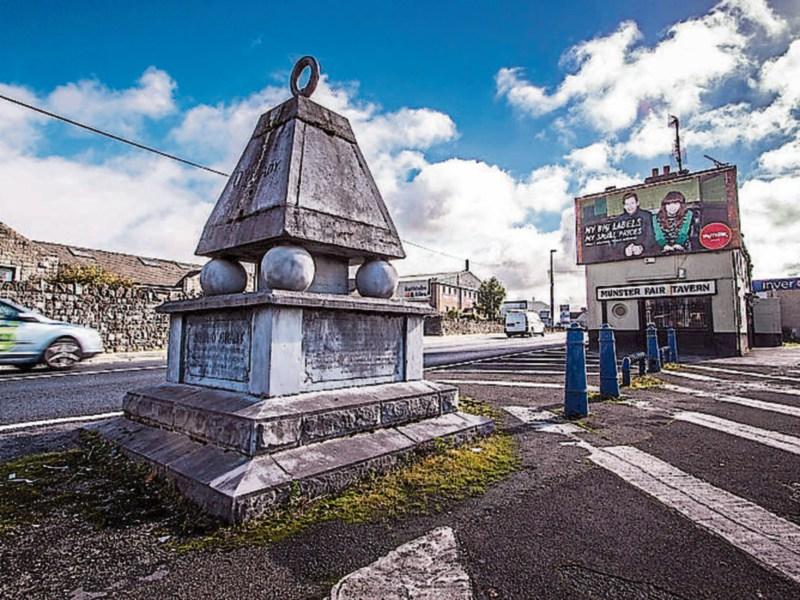 THIS WEEK as we approach the anniversary of his death at just 42 years, I recall the life and times of one of Limerick's great athletes John O'Grady from Ballybricken. A champion weight thrower, he was born on February 17, 1892 in Ballybricken. His parents were William and Catherine O’Grady, who were farmers. His mother Catherine died when John was only 6 years old, leaving his father William to raise five young children on his own. He stood 6' 4" and weighed a massive 20 stone of bone and brawn which he carried with grace and ease at his peak.

John's uncle Ned O'Grady (1851-1896) was a champion weight thrower too, winning Irish and World titles also. At the height of his greatness he stood 6' 3" and scaled 17 ½ stone, and he was another magnificent specimen of Irish manhood. He specialised in pushing the 42 pounds and achieved a world record in Limerick on July 3, 1878 with a throw of 27 ft.11ins. Very interestingly when the weight was tested it touched 43 pounds, and the record stood for six years.

With such ancestry it was little wonder that John O'Grady developed into a world beater. He first hit the headlines at Kilmallock on September 7, 1913 when he put the 56-pound weight (from his shoulder) 23ft.11 ins to share the world record with M O'Brien of Bulgaden, who was a constant rival. From then until 1933 he won countless titles , broke numerous records. He competed in Triangular International Meetings, and the Tailteann Games in 1924, and gave exhibitions at sports meetings in many parts of Ireland up to 1932. Truly a magnificent career spanning twenty years, that placed him firmly in the history of Irish achievements. He represented Ireland in the 1924 Summer Olympics and was the country’s flag bearer. He participated in the shot put, which he threw 12.75 metres which placed him 17th in the Olympics.

Caman who was secretary of the Limerick Athletic Association, when John was treasurer, and a great friend of his compiled his achievements as follows:

Pushing 56 lb (or from the Shoulder)

In his later years, he was the rates book inspector for the Limerick County Council and was treasurer of the Limerick Athletic Club. He died at his home in ‘St. Kevin’s’ Alphonsus Terrace, Limerick, on November 26, 1924. His funeral took place in St. Michael’s Church (R.C.) and he was buried in Kilmurry graveyard

It is interesting to recall that among the many priceless items on display in conjunction with the 1973 Feile na nGael Museum in Limerick was a cup that was awarded to John in recognition of his outstanding weight-throwing feats at the 1924 Tailteann Games. The fact that the events in which John specialised are now obsolete, may mean that the present-day enthusiast has less interest. Nevertheless, the astonishing performances of the Ballybricken giant will live forever in the annals of Limerick and Irish Athletics.

The limestone monument (top part in the shape of a handle of a weight) was unveiled at the Fair Green, Mulgrave Street, Ballysimon Road on November 21 1937, two years after his death , is surmounted by a replica of the 56Ib weight on which is inscribed "O'Grady" on the side facing the city. It was erected by his admirers, and the inscription reads, "In recognition of his phenomenal athletic ability and as a lasting tribute to his sportsmanship, modesty and generous nature." Unspoiled and unaffected by praise or achievement his simple greatness remains an edifying memory and should forever serve as a model for those who seek to maintain Ireland's athletic prestige." Limerick Civic Trust have been taking care of the monument in recent years.

Caman paid him a lovely tribute as follows: John O'Grady had high intellectual gifts and shared the light he had in him unstintingly with those around him. Undoubtedly, he won the hearts of all sorts and conditions of men by the charm of a bright genial and sunny nature. His passing was a severe blow to his legion of friends, as well as a big loss to the Irish Ireland movement. He left us all too soon to join those famous Irish athletes of yore about whom he loved to talk. They were a brilliant band surely and enriched a thousand-fold by dear John's presence. Here on earth his greatness is written deep in the hearts of those that knew him, and a monument to his memory erected by his friends in his beloved Limerick will ever keep his name green even amongst generations of Gaels yet unborn.

In the quiet little churchyard in Kilmurry the inscription over his grave simply says: " John O'Grady born at Ballybricken 17th February 1892, died at Limerick 26th November 1934. He worthily upheld Ireland's athletic prestige and endeared himself to all by his loving character and simple bearing." As we breathe a prayer for his noble soul, I can only add that for his intimate friends and recollections of his friendship will lighten many a day in the years ahead. A lovely tribute indeed from Seamus O'Ceallaigh (Caman).