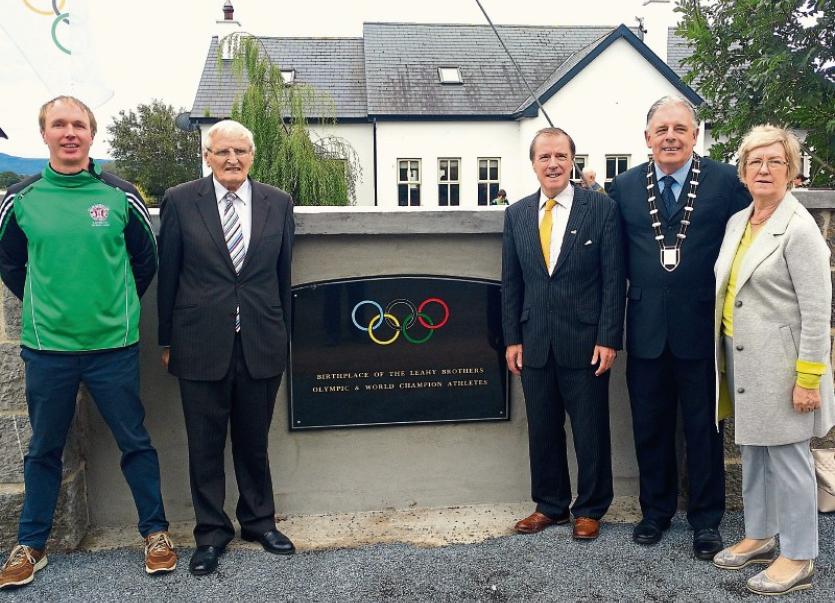 Ronnie Long (second from left) with Cathaoirleach of the Cappamore-Kilmallock Municipal District, Cllr Mike Donegan and Cllrs PJ Carey, Ger Mitchell and Brigid Teefy in Creggane for the unveiling of a

I ALWAYS like to see people who have achieved prominence in their chosen field - be it in business or sports - honoured. It is nice to do it while they are alive and can enjoy the occasion, but this may not be always possible. On Saturday September 7, a plaque was unveiled at the homestead of Con and Pat Leahy, famous athletes from Cregane, near Charleville.

The plaque with the five Olympic Rings will now stand as a reminder of their many successes over the years.

The Leahy’s were a wonderful family of athletes. The six brothers - Paddy, Con, Joe, Tom, Mick, and Tim - could hold their own with the best, and they must go down as the most versatile performers in the history of athletics. The seventh brother Jack, though devoting the bulk of his time to horses, and the show ring, also won prizes in the athletic arena. They had a sister who it was said could beat the best of them, even when world honours rested in their little home in Cregane, by the banks of the winding river Maigue.

Cornelius Con Leahy was born in Cregane, in the parish of Colmanswell, on April 27, 1876. He was the eldest member of the world-famous family of jumpers. Con won a gold and a silver medal at the 1906 special intercalated Games held in Athens and he won a silver medal, finishing joint second in the high jump, at the London Games in 1908. He won twenty Irish Championships (11 IAAA titles, and 9 GAA titles) as follows: 12 high jump, 5 long jump, 1 triple jump, 1 standing high jump, and 1 standing hop, step, and jump.

The first indication of his talent was revealed to his school mates, returning from Charleville CBS, when he was aged sixteen. He jumped Mannix’s gate which stood 5 foot 8 inches high and was spiked on top. It was in response to his pals telling tall tales of their athletic achievements.

Together with other Irish born athletes, Peter O’Connor, and John Daly Con Leahy was entered, to represent Ireland, in the 1906 Olympic Games in Athens, by the Irish Amateur Athletic Association (IAAA) and Gaelic Athletic Association (GAA). However, under the International Olympic Committee rules, they were designated as representing Great Britain and Ireland. They attended the games entirely at their own expense, receiving only green blazers.

Leahy won the Gold Medal in the high jump with 1.775 meters, (after 36 jumps) beating Hungarian Lajos Gönczy by 2.5cm and the Silver Medal, in the triple jump coming second to fellow Irishman Peter O’Connor. Con Leahy was subsequently involved in the protest at the flag-raising ceremony for the long jump when O'Connor, from Waterford scaled a flagpole, in the middle of the field and waved the Irish flag. Con and John Daly stood guard underneath to stop any interference. Peter was an accomplished gymnast whose rapid climb and protest caused a great sensation.

In the 1908 Olympic Games, Leahy again took part in the high jump. Three jumpers, Leahy, Géo André and István Somodi, shared second place with 1.88 meters behind the American Harry Porter, who won with 1.90 meters. After his Olympic success Con Leahy returned to Ireland. A year later, in 1909, he emigrated to the United States and settled in New York. He died in Manhattan at the age of 45 on December 18, 1921. In 2006, to mark the 100 anniversary of his Olympic medal win, a memorial was unveiled in Thomas Street, Limerick.

Patrick Joseph Leahy was born on May 20, 1877 in Cregane, on the border between Limerick and Cork. Their home off the main road was just a stone’s throw from the rebel county and the family were often claimed as being from Cork.

Paddy who was a born jumper stood at 5 foot 9 inches and weighed 12 stone whilst in training and he first appeared as a competitor in 1895. He was universally acknowledged as the most stylish jumper that ever crossed a lath. Beautifully built, he ran like all the Leahy’s, straight at his leap, rose almost perpendicularly, picked his knees to his chin, in a most natural fashion, swung around on top with no apparent effort and landed facing his take off as lightly as a thistle down.

At nineteen meetings in 1998 he had forty-three firsts in competition against Ireland’s greatest athletes. Paddy won the British high jump in Dublin in 1898 with a record jump of 6 ft. 4in. (1.93m). He also competed internationally in the long jump and the triple jump.

In the 1900 Olympic Games, in Paris competing for Great Britain and Ireland, Pat Leahy took part in three jump disciplines. He won the silver medal, in the high jump 1.78m, behind Irving Baxter of the United States, and the bronze medal in the long jump 6.71m, behind Alvin Kraenzlein, and Myer Prinstein, He finished in fourth place in the hop, step and jump behind Prinstein, James Connolly, and Lewis Sheldon.

In 1909, Paddy and Con Leahy emigrated to the United States. At the Irish Games in Chicago in May 1915, when Paddy was forty years of age, he jumped 5 foot and a half inch in the standing high jump; 11 foot 10 inches in the standing long jump and 35 feet 9 inches in the three standing jumps (hop step and jump) - an unparalleled achievement for his age. Paddy won the following Irish Championships: 6 high jump titles, 2 long jump titles, 1 triple jump title, plus 16 other placing. Paddy died in America on December 29, 1927, aged 50.

Many visitors came to see them train, in the little field close to their home, including an English gentleman, who was amazed and delighted to see the sister perform alongside the brothers. He became so charmed with the lady that before long he proposed marriage to her. Miss Leahy refused the offer, although he was a fine type, and of good social standing, as she preferred to refrain from mixing the true Celtic blood with that of the Sassenach.

On Wednesday, September 11, a plaque was unveiled in memory of Michael McAuliffe - later to be known as Max Arthur Mac Auliffe - at Templeglantine adjacent to Halla Inse Bhán, and the National School. He was born on September 11, 1838 in Glenmore, Monagea. The eldest of five sons and seven daughters of John McAuliffe, schoolteacher and farmer, and Julia McAuliffe (née Browne), schoolteacher, both from the county. He was educated in Glenmore and then Templeglantine national school, of which his father became the first principal in 1846.

He received further education in Ennis, and University College Galway before joining the Indian Civil Service in 1862 and being posted to the Punjab. where he rose through the ranks to become a Divisional Judge in 1884. Between 1875 and 1881 he published four articles on Sikhism in the Calcutta Review, and he had begun to learn the languages of the Guru Granth Sahib, the sacred book of the Sikhs. He became interested in the Sikh religion, and later became a member. 1893 he resigned from the lucratively paying position Indian Civil Service to undertake writing on Sikhism, a project that took a major part of his life, nearly 25 years. He also published numerous articles and pamphlets, including the entries on ‘Sikh’ and ‘Sikhism’ in the eleventh edition of the Encyclopaedia Britannica. MacAuliffe, who was unmarried, died at his residence, 10 Sinclair Gardens, West Kensington, London, on March 15, 1913. He was held in the highest esteem by followers of the Sikh religion, and now remembered in his native Limerick.