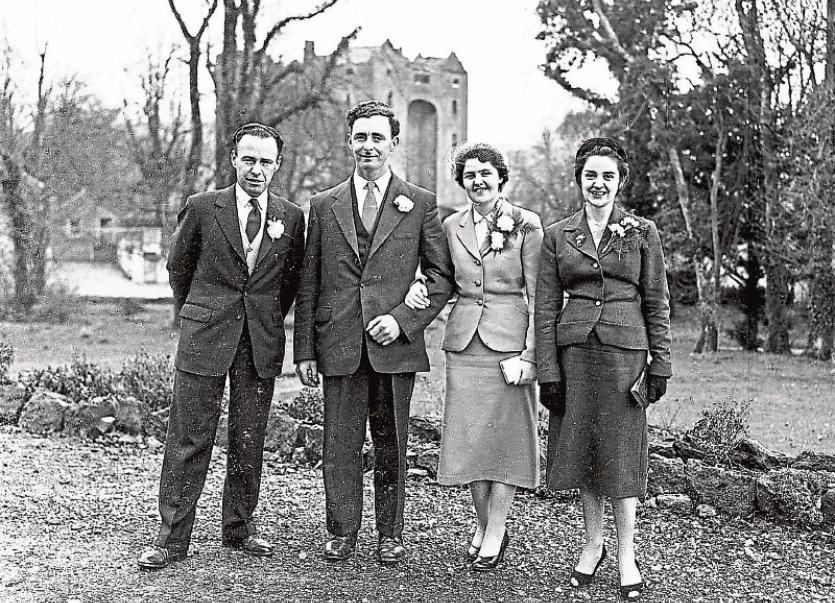 Bunratty in the background: After the McCarthy-Woulfe wedding, which took place in Cratloe in February 1956, the wedding party took the short trip to the famous castle for their wedding photograp

BUNRATTY CASTLE is a famous landmark on the main road from Limerick to Shannon Airport. It stands upon what was formerly an island called Tradraighe, on the northern bank of the Shannon River. The site was strategically important, commanding as it did all the medieval traffic by water to Limerick , the gateway and the port of the southwest of Ireland.

The name Bunratty means the mouth of the Raite river, which at that time was called the O'Garney. The castle lay some distance off the main road which at that time ran along the Cratloe hills and through Six Mile Bridge. The road passing the castle to the west, and the castle today, is of more recent construction, built in 1804 on what had formerly been impassable marshes.

The Vikings, from their settlement and trading post at Limerick, fortified the island which commanded the northern shore of the river. It is not known if Bronze Age and early Iron Age- people lived there before them, but such a strong site would have attracted settlers from the earliest times. In any event, the Vikings are thought to have constructed the great earth works which can be recognised as a broad shallow, or ditch running all around the high ground on which the castle now stands, from the Shannon to the river Raite.

In the 13th century, the Normans in their turn, coveted the stronghold, and around the year 1250, Robert de Muscegros built a castle there. It is the first castle for which there is documentary evidence. It was probably an earthen mound with a "Bretesche", a strong wooden tower, on top. It probably stood on the high ground, close to the ruined ground. After de Muscegros death the lands were granted to Edward 1 to Thomas de Clare, son of the Earl of Gloucester, who in 1277 built a castle there of stone, surrounded by outer walls. This was destroyed by the Irish in 1332. In 1353, a new castle was built by the Kings Justiciart Thomas de Rokeby. It soon fell again into Irish hands.

The present castle, the latest of at least four that have stood on this spot, was built about the middle of the 15th century by Sioda Mac Conmara, but by the year 1500, it had become one of the strongholds of the O'Brien's, kings (and later earls) of Thomond. The fourth Earl made it his chief seat and altered the castle to some extent.

Bunratty's heyday began with the accession of Elizabeth I, in 1558, and lasted for almost a century during that period; walls and ceilings were richly decorated with stucco-work, and elaborate gardens were also laid out. Rinuccini, Papal to the Confederation of Kilkenny, who stayed at Bunratty in 1646, wrote: “Bunratty is the most beautiful spot I have ever seen. In Italy, there is nothing like the grounds and palace of Lord Thomond."

Some of the most famous events in the history of the castle took place in the middle of the 17th century. In 1641 the Parliamentary forces occupied Bunratty, which was still a most important strategic position. The defence of the castle was in the hands of Admiral Penn, the father of the celebrated founder of Pennsylvania. After a long and fierce siege by the Irish Confederate Penn had to surrender. Bunratty appears today just as it must have done in the 15th century. It has been arranged as the chief seat of an Irish lord might have been over four hundred years ago, and furnished with Lord Gort's collection of early furniture, tapestries and works of art to re- create the authentic 15th century atmosphere.

On entering the castle over the drawbridge, the door immediately in front opens into a great vaulted hall, the main guard of the castle. This was the main living room of the more menial retainers of the Earl, and of his common soldiery. It was also the general dining room of the castle, and here also were dungeons and storerooms.

At the top of the stairs leading from the Main Guard is the great Hall of the Earls of Thomond. Here the Earl sat in state and dined and entertained guests with his officers guests. Above the Great Hall area is Earl's Private Chapel. It was graciously restored in the 1960s, and the Shannon Free Airport Development Company Ltd, which is responsible for the administration of the Castle, has gone to great lengths to widen its attraction to tourists.

We should all take the opportunity to experience a window into Ireland’s past and explore the acclaimed 15th century Bunratty Castle.

In next week's column I will bring you the Bunratty Folk Park story.

THE SUMMER edition of the Green and White magazine was delivered to schools and shops before the school holidays, and it is another 36-action packed issue. The joint editors are Ciaran Crowe, Patrickswell N.S and Joe Lyons, Ballybrown N.S. and it was first published in 1996. This is issue no 69 and action from the 2019 Mackey Cup is on the front cover of the magazine.

Brother James Dormer received a GAA President's Education Award this year, in recognition of a lifetime of outstanding service to education and Gaelic games. He received the award from John Horan and his career is recalled with photographs in a nice tribute.

The Green and White file features an interview with Séamus Hickey Limerick hurler who retired in 2018 after winning an All-Ireland medal. He gives his views on what was different about 2018 compared to his other years playing for Limerick, and why he was more grateful than sad about retiring.

South Limerick won the Neville Cup and the competition is featured in two pages of print and photos. The Munster GAA Primary Game feature contains Limerick team lists and photographs of the players that represented the county in hurling football and camogie.

John Kiely talks about "At Last" the book published by Ciarán Crowe and Joe Lyons, which was such an outstanding success. It recalls quotes from his fantastic speech when he launched the book in the Granary Library last year. The 2019 Mackey Cup is covered over four pages of print and photographs, with team line-ups and results. East Limerick defeated West Limerick by four points in the final.

Limerick Hurlers making their own History is the title of an article by Stephen O'Byrne's. It was aired on RTE Sunday Miscellany on August 19, 2018, and it is a recall of his time following Limerick hurlers. Stephen also has a letter published in praise of the book "At Last" describing it as an incredible book.

The Lundon Eye casts the spotlight on the 2019 National Hurling League Final Programme from March 31. He describes the team’s journey to the final where they defeated Waterford by 1-24 to 0-19. The front cover of the 64-page Programme was very colourful and it contained interesting articles and statistics.

Limerick's All-Ireland Winning Captains is a new series, and in Part 1 Denis Grimes from the Kilfinane club is featured. He was Limerick's first All-Ireland winning captain, and he is buried in Wales.

There is an interesting piece about Niamh Ryan from Ballybricken, who plays football and camogie for Limerick. It also includes a Question and Answer session with Niamh who is a teacher at Laurel Hill Secondary School.

All the school competitions are featured and there is a roundup of games in the four divisions. The current issue is another fine publication, with lots of interesting news, great photos, puzzles, cartoons, crossword and in of the post to satisfy all readers.