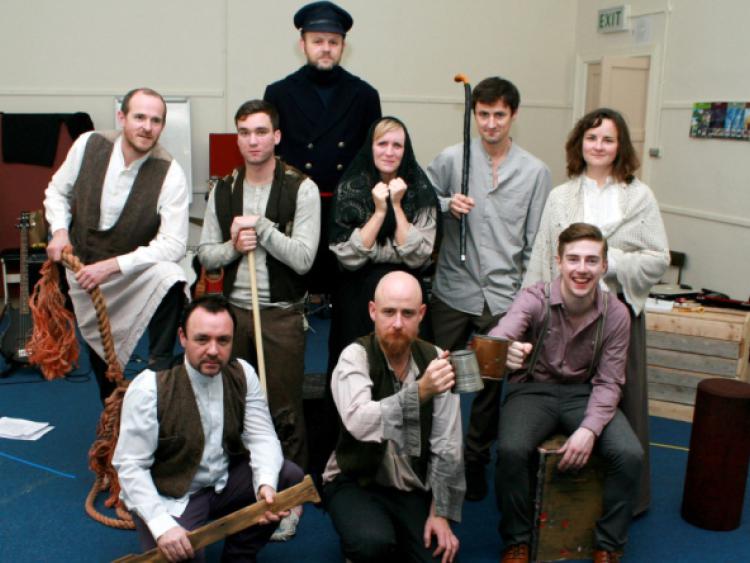 MUSICIANS carrying instruments, dressed in the rags of a ship’s crew that has been lost at sea, walk towards the front of the stage. This is the Brad Pitt Light Orchestra, but not as you have ever seen them before.

MUSICIANS carrying instruments, dressed in the rags of a ship’s crew that has been lost at sea, walk towards the front of the stage. This is the Brad Pitt Light Orchestra, but not as you have ever seen them before.

The Limerick band, focussed around siblings James, Ann and David Blake, plus Australian Jamie O’Neill, are at the centre of a brand new musical, produced for City of Culture and opening in the Lime Tree this week.

Written by Mike Finn and directed by Gúna Nua’s Paul Meade, The Unlucky Cabin Boy tells the dramatic true story of the Francis Spaight, a ship that left Limerick Docks in 1835.

Disaster strikes and people die, suffice to say, with grisly tales of cannibalism aboard a ship left adrift. A chilling tale of hardship, sacrifice and the will to survive is brought to life through original music and lyrics by BPLO songwriter David Blake and Mike Finn’s pen. It promises to be a seaworthy combination from a vaudevillian, theatrical band, matched with one of Limerick’s best and most witty playwrights.

The idea originated from academic research David’s wife Maeve was doing, and the ship sailed when the offer of City of Culture funding came to pass.

The story of deck hand Patrick O’Brien is seldom known in these parts, but was immortalised in a short story by American author Jack London. It is a startling one, with dark overtones. Pigtown author Finn has infused it with humour, David Blake and director Paul Meade declare, bringing his customary wit to a dark tale.

“It adds a lovely balance to the story, Mike’s a very funny writer and has that quippish, bawdy dialogue, as well as some very clever stuff too,” says David.

“The story is a nasty story, obviously, the themes that come out are ones that you need room to think about afterward, but the humour adds a good balance.”

“I had never heard of the story before and thought it was a gift, what an amazing story and how many aspects of life it touches on,” interjects Paul, a renowned theatre practitioner and director.

“The fact that it was a Limerick story - anyone who works in theatre and is from Limerick, is always hungry for stories from Limerick and to make them into fictions as well.

“It sort of divides into two halves, even though you are reminded of what is coming, it does play as a sort of a Boy’s Own adventure, and Mike has managed to get a really nice balance of light touch all the way through, even when they are on the ship and they are completely destitute with no food and no water - there is still gallows humour in there, he can’t resist a joke,” he laughs.

Allowing the music room to breathe in the play was key, both admit, while the band became a fixture within it.

“We are sort of always on because we are never in an orchestra pit, we are visible always and part of what is going on, underscoring and performing songs,” says David.

“We weren’t sure how the music would play out but we knew we didn’t want it to be sung straight - we wanted a play with songs in it, but the challenge really is that the songs would not interrupt the narrative flow.”

The results will be on offer as a five track EP, and David says the songs touch on many themes.

“The theme that stuck out for me was the injustice of it, particularly the strong dominating the weak, rich dominating poor,” says David.

“That together with loss, a mother losing a child, coupled with emigration and a precarious future - from a musical point of view I explored all of those things and it meant I could jump into any genre; some period stuff, shanties, music hall, anthemic stuff, a bit of trad - at the end of the day it has to be entertaining as well as having a melodic sound.”

Paul admits the process of marrying theatre and music was “massively challenging”.

“You can see why those West End producers and directors get the big bucks because it is bloody hard,” he laughs.

“It is also really rewarding because you start to realise how the music does so much of the work for you, and I am learning that as we go along that you leave a space empty for the music and try to direct for the music, it does the work.”

The Unlucky Cabin Boy previews in the Lime Tree on Wednesday, November 5 and runs until November 8