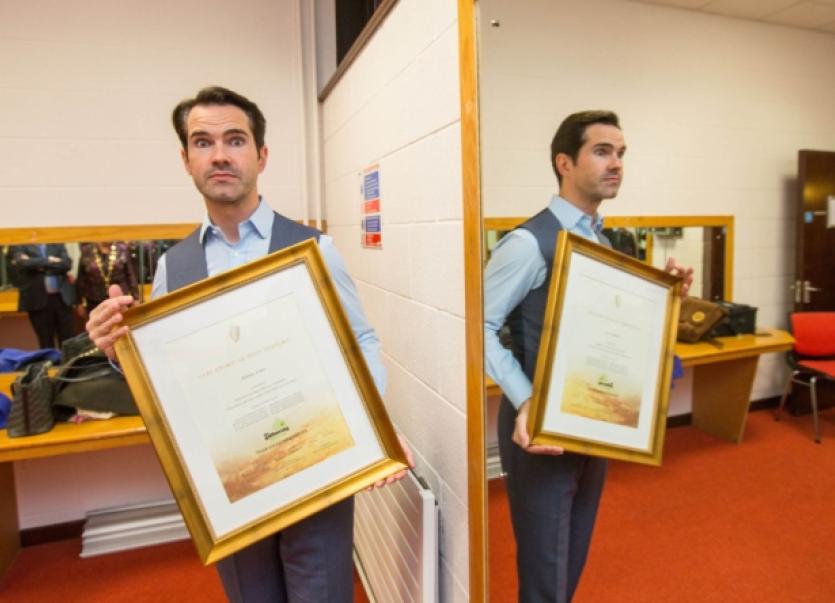 “I’m kind of from here because my parents are from here, although I don’t sound like you because I was brought up in the Home Counties,” he smiled.

Earlier, the comic was presented with a certificate of Irish heritage, joining such illustrious company as Tom Cruise in receiving the object, which is signed by Enda Kenny and recognises “the contribution made by members of our Diaspora worldwide”.

Given Carr’s show that followed, in which no section of society was spared his withering assesment, it would have beeen interesting to have heard his thoughts on the certificate’s provenance, but the official statement merely said that he was “honoured and delighted” to receive it from Mayor Kathleen Leddin and Gathering co-ordinator Mary Killeen Fitzgerald.

Mayor Leddin said that Carr was “very proud of his parental connections with Limerick and certainly has an emotional attachment to the City and Ireland”.

“He was very honoured to receive this Certificate, which I think is a wonderful initiative to recognise and celebrate Ireland’s Diaspora. We are delighted that Jimmy has confirmed he is planning a return to Limerick in 2014 when the City becomes Ireland’s first National City of Culture,” she added.

Ms Killeen Fitzgerald explained that, as part of the Gathering Ireland initiative, every local authority was invited to nominate a person of Irish decent and born outside the island of Ireland, to receive the certificate.

“We nominated Jimmy Carr to receive such a certificate given his parental connections to Limerick city, and we are delighted that he accepted our offer,” she explained.