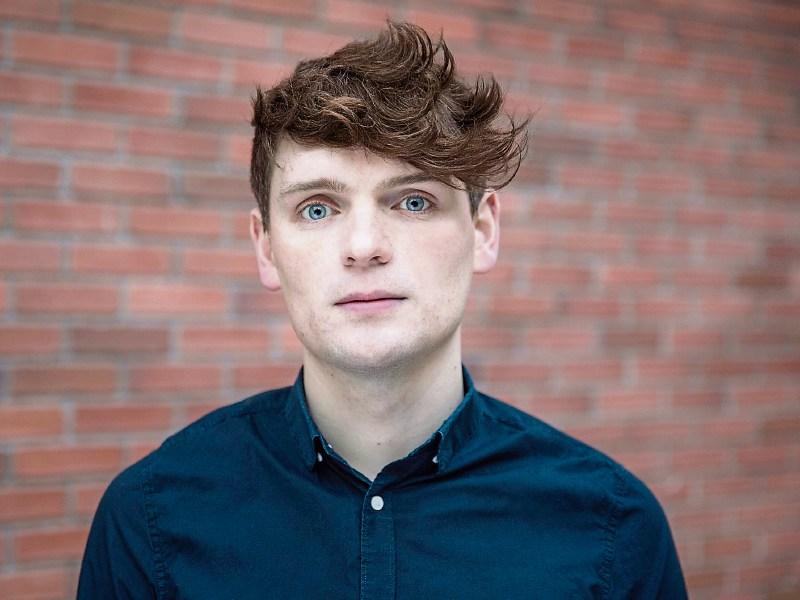 Being a proud Cork man (I grew up near Cloyne) nevertheless I do have close connections to Limerick.

You see as a child I was here almost every second weekend visiting my extended family in West Limerick and especially my Nana’s farm in Askeaton, where plenty of afternoons were spent collecting eggs and herding cattle across the busy main road. Indeed, my father also grew up on a farm in West Clare, overlooking the Shannon Estuary.

Originally, I studied Drama and Theatre in University College Cork and then went on to the Gaiety School of Acting in Dublin.

I love coming to scenic Kilmallock. Indeed, around this time last year we brought a show called ‘Ledwidge’ to Friars’ Gate Theatre. I also remember that the weather was beautiful and we were able to have a little picnic looking out over the old abbey before going in to do the show. I’m hopeful for similar weather this time around!

Ironically, my father’s family moved to Limerick, his mother’s home county, when the land was bought by an American company headed by the famous Hollywood actor Cary Grant.

The company’s intention at the time was to develop a resort for retired Americans but the enterprise fell through after a year or two. My mother’s side of the family also come from Limerick. My grandmother grew up in the Feenagh-Kilmeedy area of West Limerick, before moving to Charleville to work in Cronin’s Hotel. She often talks about the drama festival that would take place there, and how her favourite plays were those by John B Keane. She often recalled that he used to call into the hotel, rest his arms upon the bar and simply say; “Any news?” I have been lucky enough myself to perform in St John’s Theatre in Listowel a few times, and his presence is always strongly felt there.

My dad was involved with a local community group in the area in the 1980s when they took part in the Tops of the Town competition.

He was mainly involved in backstage work such as building sets. The shows were quite popular at the time and were staged at the old Savoy Theatre in Limerick. My uncle, Liam, who is a primary school teacher in Caherdavin, was also involved with a couple of Irish language theatre companies in the 1970s and 1980s, one was called Astóirí na Tíre and another was called Buíon Phádraig. They were amateur groups run by a man called Seán O’Morónaigh from Thurles. They put on several plays locally and also travelled to Gaeltacht areas, such as West Cork, Kerry and Connemara. One of the plays was called An Fear úd Cusack, which was about Michael Cusack one of the founders of the GAA.

Enda Walsh is one of my favourite playwrights and it was a pleasure to be involved in two of his plays, namely; ‘Disco Pigs’ and ‘Sucking Dublin’, late last year.

These were staged at Smock Alley Theatre by ‘Reality: Check productions’. I played the part of Pig in Disco Pigs, a character made famous by Cork-born actor Cillian Murphy. Enda Walsh is one of my favourite playwrights so I felt very lucky to play such a well written character. The production was nominated and won the award for Best Ensemble at this year’s Irish Times Theatre Awards. Obviously we were delighted, but I also think that it is important to the future of Irish theatre that a young and self-funded company is recognised along with the bigger theatres and production companies.

My current play, called ‘Norah’, is about the family of one of the hunger strikers in the Maze Prison in 1981.

It is written by Gerard Humphreys, and directed by Anthony Fox. It is a family drama that takes in the tense political situation at the time. The family is at breaking point due to the son’s (Norah McVeigh’s brother, Kieran) involvement in the hunger strike, and relationships (the British Foreign Office, the Catholic Church, RUC, IRA, and her own family), put tribal loyalties put to the test. These internal pressures reach a crescendo at the point of his death. I play the character of Seán, the younger brother of the hunger striker.