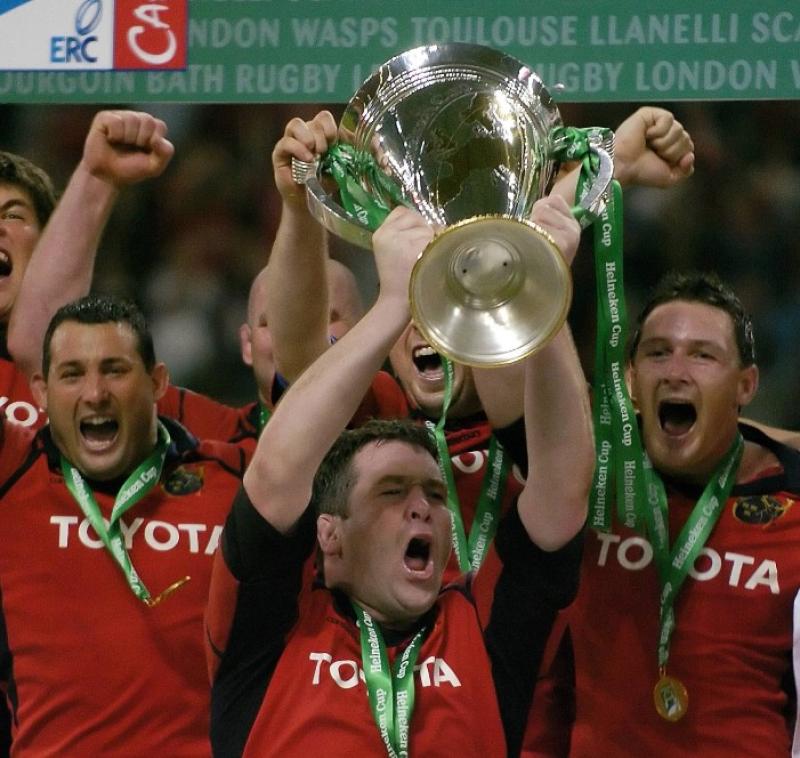 MUNSTER, no longer the nearly men, were finally crowned European champions when claiming the Heineken Cup for the first time with a gripping 23-19 final win over Biarritz in Cardiff.

Heartbreaking defeats in the finals of 2000 and 2002 had upped the stakes for Munster, but it was a case of third time lucky after producing the performance of a lifetime. A packed Millennium Stadium erupted in a sea of red after Trevor Halstead and Peter Stringer both scored tries to savour.

And Ronan O'Gara kicked a perfect five out five to clinch an historic win for the Irish giants and spark wild celebrations.
The sight of 20,000 fans sardined into Limerick's O’Connell Street on the big screen at the Millennium Stadium galvanized the Munster players and fans alike.

Afterwards Munster coach Declan Kidney said: “I think you try to put your emotions in a box for the match because that’s what the job was, and just concentrate on staying with it. It was hard at one stage when it flashed on the big screen to O’Connell Street (in Limerick).

“That was a bit special. You just had to make sure you got back into the moment. The goodwill poured into the team has been huge.”

Victorious Munster captain, the late Anthony Foley said: “I've been in a ground twice when the opposition's captain has lifted the trophy and to be the one to go up there and pick up the silverware is a great feeling.

“I felt we deserved it over the year. We’ve always said we want to win trophies and big competitions. What we achieved today is magnificent.”