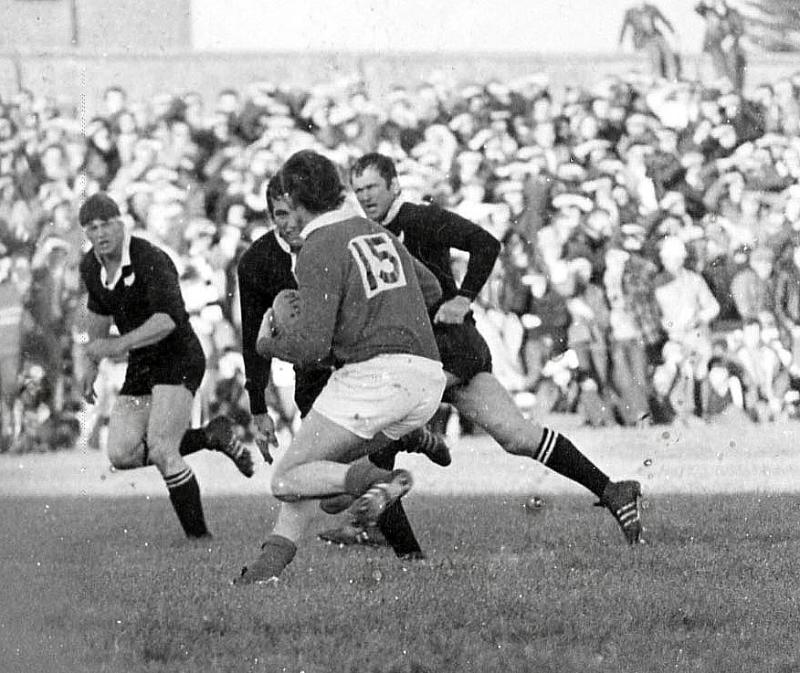 Larry Moloney (Garryowen) carries the ball, while eyed up by three All Blacks

THE morning of October 31 dawned wet and windy in Limerick, prompting Munster’s rugby faithful to harbour optimism ahead of mighty New Zealand’s visit to Thomond Park.

It was somewhat ironic then, given what was subsequently to transpire, that the rain and wind gave way to a clear blue sky and calm conditions in time for kick-off. More than 12,000 fans turned out to watch from inside the ground.

Munster had played two matches in London as part of their preparation for the All Blacks visit, but the fixtures did not go well. They were thumped 33-7 by Middlesex and scraped a 15-15 draw against London Irish.

Despite their lack of form, Munster took the attack to the tourists from the kick-off, who were surprised by the intensity of the opposition. Seamus Dennison set the tone with his famous massive hit on Stu Wilson early in the first half that nearly ripped the famed winger's shoulder in two.

In the 11th minute, Munster won a lineout from which the outstanding fly-half Tony Ward delicately chipped the ball over the Kiwi backs and left-wing Jim Bowen gathered, brushing aside three tackles on a 40-yard run before passing inside to Christy Cantillon who scored by the posts. Ward slotted the conversion.

Six minutes later Ward extended the lead with a drop-goal.

The All Blacks improved in the second half, but still could not get close enough the Munster line to threaten. Shortly after the hour mark, Ward kicked his second drop-goal.

At the final whistle the crowd invaded the pitch and the Munster players returned from their dressing-room for a lap of honour.

A stunning win that would later inspire an acclaimed play and book.