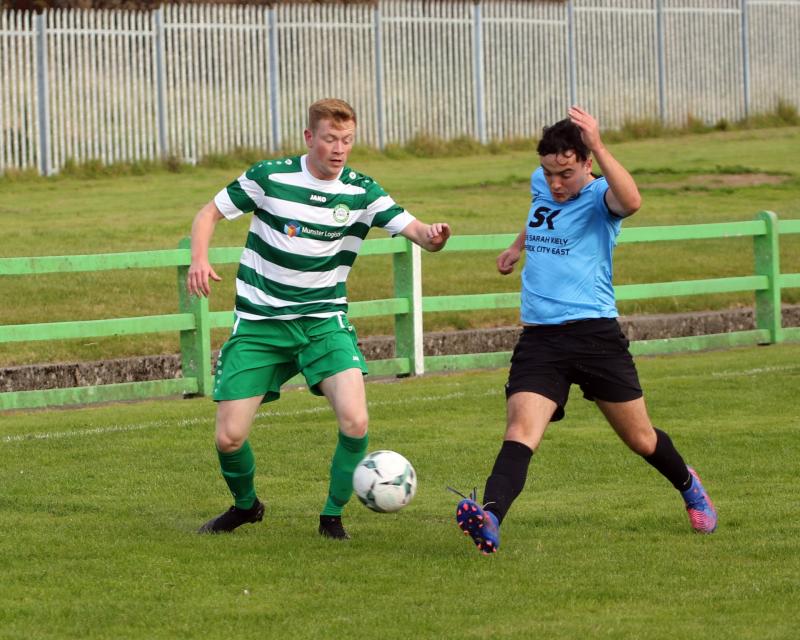 LAST season’s beaten finalist’s Pike Rovers eased into the next round of the FAI Junior Cup with a facile 12-2 win over lower league side Newtown Rovers.
The Hoops took just five minutes to get going when Paudie Murphy slotted home.
A double from John Connery put the Premier side out of sight and before the break they tacked on three more courtesy of Mikey Conlon (2) and Eoin Hanrahan.
Things got no better for the visitors after the break when Kevin Barry scored four. Danny O’Neill and Aaron Murphy made up the tally. Conor Finucane and Graham Power scored for a brave Newtown side.
Pike Rovers: Gary Neville; Evan Patterson; Sean Madigan; Nathan O'Callaghan; Adam Lipper; Eoin Hanrahan; Kyle Duhig; Shane Walsh; Paudie Murphy; John Connery; Mikey Conlon, Subs: Danny O'Neill; Colin Daly; Aaron Murphy; Kevin Barry.

Fairview Rangers 6
Mungret Regional 1
FAI Junior Cup specialists Fairview Rgs eased into the next round with a comfortable win over Mungret at the Fairgreen on Wednesday evening.
Winners of the competition on nine occasions, Fairview will again be fancied as one of the favourites to go all the way.
Mungret had the misfortune to cross their path in the opener. The visitors did not help their cause, attempting to play the ball out of their area on too many occasions. Fairview took advantage which ended with Conor Ellis being upended in the area. Steven Bradley converted.
Shane Duggan scored a good second from an acute angle and another soft penalty allowed Bradley to make it 3-0 before the break.
Jack Arra tacked on a fourth after the restart before Donie Curtin scored a beauty to reduce the deficit.
However, Ellis added a fifth for the home side and an own goal completed the scoring.
Fairview Rgs: Aaron Savage; Scott Kirwin; Jeffery Judge; Jake Dillon; Jason Cross; Darragh Rainsford; Shane Duggan; AJ O'Connor; Conor Coughlan; Conor Ellis; Steven Bradley, Subs: Jack Arra; Conor McCormack; John Mullane; Jack Cross; Jake McNamara
Mungret Reg: James Roche; Aaron Long; Donie Curtin; Conor Myers; Eoghan Ryan; Josh O'Rahilly; David Conway; Craig Prendergast; Pat Aherne; Eoin Kelly; Mark Patterson, Subs: Aled Harkin; Darragh Killian; Gary Kelly; Stephen O'Dwyer

Carew Park 0
Ballynanty Rovers 3
The big game of the weekend failed to live up to it’s pre-match billing when Ballynanty Rvs defeated Carew Park 3-0.
The home side failed to get their A game flowing, more to do with the opposition however.
Balla have perfected the art of getting the ball to their dangermen quickly which keeps their opponents on the back foot.
There was just the minimum between the sides at the break. The deadlock was broken when Adrian Power’s cross into the area was headed clear but only as far as James Fitzgerald who fired through a crowded goalmouth to find the back of the net.
The expected Carew response after the restart never arrived and it was Balla who added to their lead when Josh Adam’s header was saved by the full stretched Evan Moloney only for the ever-alert Gbadebo Habideen to pounce on the rebound to blast home from close range.
Balla eased any remaining doubts when Aidan Hurley’s clever pull back saw Thomas Byrnes fire a beauty in off the post to seal the win.
Carew Park: Evan Moloney; David Power; Jeffery Dore; Gary Griffin; Darragh Walsh; Gavin Hehir; Pat Boyle; Jamie O'Sullivan; Jonathan Grant; Kieran Hanlon; Aaron Nunan, Subs: Danny McCarthy; Gavin White; Adam Dore
Ballynanty Rovers: Stephen McNamara; Darragh Hughes; Liam Byrnes; Aidan Hurley; Josh Adams; Eddie Byrnes; Cian Fitzgerald; Thomas Byrnes; James Fitzgerald; Gbadebo Habideen; Adrian Power, Subs: Dylan Higgins Kelly; David Donnan; Conor Keane

Elsewhere in the FAI Junior Cup Division 3A side Brazuca United caused the shock of the round defeating Premier A side, Cappamore 4-0 to advance to the second round.
Vithor Avilla gave the home side a half time lead and the same player added a second after the restart. Murilio Carvalho and Rafael Henrique made sure of the result with further goals in a memorable win.

Shelbourne put up a good showing despite going down 3-1 to Premier A side Corbally Utd. Ian O'Donoghue netted twice for the winners with Ryan McLaughlin also finding the net.

Stephen O'Halloran goal was enough to give Caherdavin Celtic the spoils at home to Parkville in a local derby while Lisnagry A were highly impressive in a 7-1 thumping of Pallasgreen. Vinny Ryan scored for the home side but goals from Jakub Jastrzebski 2, Dean Ryan, Jordan Clancy, Eric Sheehan, Niall McGrath and Kieran O'Malley blew them away.

Star Rvs knocked out Granville Rgs on a 3-1 scoreline. Jason Daly scored twice with Jordan Boland making up the tally.

Premier League
Regional Utd 1
Aisling Annacotty 2
Aisling Annacotty joined Pike and Fairview atop the Premier League when they defeated Regional in Dooradoyle on Saturday evening.
They did it the hard way, battling back from a goal behind to take the spoils with all the goals coming in the first half.
The home side took the lead when Pat McDonagh picked up a throw in and taking advantage of the visitors not closing down, let fly from 25 yards with an effort that evaded Brian O’Connor on it’s way to the net.
Aisling had the perfect response and were level within minutes. When Tony Whitehead’s inswinging corner kick was headed clear, Theo Joyce gathered and showed some neat skill to get past his marker and drill a ball to the back of the net, albeit with the help of a deflection.
Aisling scored again midway through the half. Liam Quinn gathered on half way and played the ball into the path of Shane Stack who, despite having no boot on, fired across the keeper and into the far corner.
The second half was a tamer affair. Aisling defended well and rarely allowed danger to their keeper.
Regional all too often delayed their ball forward, allowing Aisling to get in shape to deal with the threat.
Regional Utd: Rob Shier; Tom Frawley; Connor Finn; Andrew Cowpar; Kieran O'Connell; Ross Fitzgerald; Pat McDonagh; Luke Ryan; Eoin Duff; Ruairi Casserley; Felipe Mostowy, Subs: Brian O'Connor; Andy Quaide
Aisling Annacotty: Brian O'Connor; Blake Curran; Gavin Dillon; Richkov Boevi; Chris Smith; Shane Tracey; Tony Whitehead; Theo Joyce; Adam Foley; Liam Quinn; Shane Stack, Subs: Shane Clarke; Kian Barry; Mike Curran