Ballingarry-born founder of Scottish side Hibernian FC to be honoured 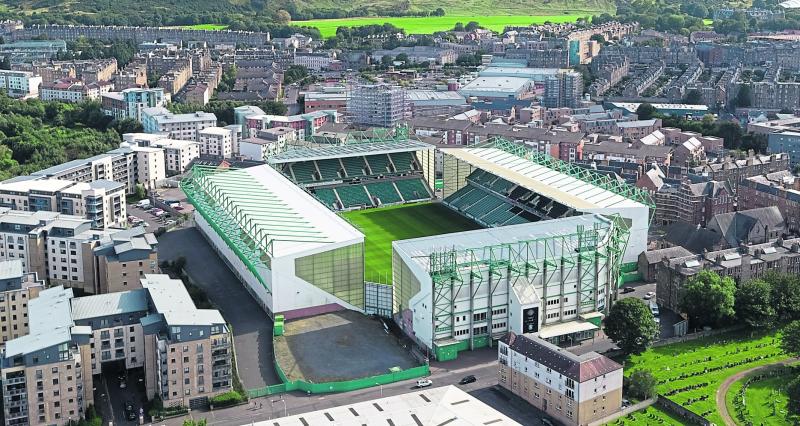 AS our world returns to pre-pandemic normality and we start to reconnect with each other in ways that had disappeared for too long, two football communities - one in Edinburgh, the other in Ballingarry, Co Limerick - have also reconnected continuing to pursue their common goal of commemorating an iconic figure who is revered by many on both sides of the Irish Sea.

That figure is Canon Edward Joseph Hannan who was born in Ballingarry on June 21, 1836 and ordained a priest in 1860. He, along with Roscommon-born Michael Whelehan, founded Hibernian Football Club under the auspices of the St Patrick’s Parish Catholic Young Men’s Society (CYMS) on the August 6, 1875.

St Patricks’ Church in Edinburgh’s Cowgate was at the epicentre of an area of the city which had become known as ‘Little Ireland,’ due to it being the destination point for the waves of refugees from the Great Hunger in Ireland and its aftermath, who flooded into the capital.

It was an immigrant community that was disadvantaged and disenfranchised, confined to the poorest housing and which faced resentment and hostility from many of the indigenous Scots who feared that these newcomers would undercut them for scarce jobs.

It was a hostility also fuelled in part by bigotry and a fear of the immigrants’ Catholicism, a religion that had been largely driven from Scotland after the Reformation and a religion that many Scots feared returning.

It was into this atmosphere of poverty and prejudice that Edward Joseph Hannan arrived in 1861 to assume the role as a junior curate at St Patrick’s, becoming parish priest a decade later. He quickly recognized the lack of opportunities for advancement available to his parishioners in what was often a hostile environment and how this could lead them— particularly the male youth of the parish—into a life of drink or crime.

Determined to channel their energies in a positive direction, he established the Catholic Young Men’s Society in 1865, which provided a variety of activities for the youth of the parish.

It was under the umbrella of the CYMS that Hibernian Football club was formed in 1875 as the latest in a line of social and sporting initiatives to occupy those young men of ‘Little Ireland.’

That outreach wasn’t confined to sport as, from the outset, Hibernian was imbued with a charitable ethos with assistance being dispensed to those in need regardless of their heritage or faith. Little could Canon Hannan or his community have imagined that this parish football team would evolve into a professional football club with such a distinguished 147-year history.

Today, Hibernian is a football club for all the people of Edinburgh and beyond, a club welcoming to and followed by people of all and no religions. However, Canon Hannan’s legacy remains and was commemorated in 1991 at a memorial Mass in St Patrick’s to commemorate the 100th anniversary of his death.

It was attended by club officials, current and former players and hundreds of fans. In 2006, the Hibernian Historical Trust renovated his grave in Edinburgh’s Grange cemetery and a rededication ceremony was held involving, among others. the then St Patrick’s parish priest.

Named after Hibernian’s birthplace, the St Patricks’ Branch of the Hibernian Supporters Association was founded in 2010. In common with the rest of the Hibernian community its members come from all backgrounds and beliefs, with those drawn to it sharing a pride in their clubs’ history and the charitable ethos which underpinned its formation.

That pride manifests itself in a commitment to support local and national charities and to commemorate the club’s heritage through a series of historical projects.

These have included the installation of a plaque to honour Canon Hannan in St Patrick’s Church, which was unveiled on March 17, 2013 and the renovation and rededication of 1902 Scottish Cup Final winning team trainer Dan McMichael’s grave in the Eastern Cemetery, which lies in the shadows of the club’s Easter Road stadium.

From 1875 until the mid-20th century the emblem which the club used to represent itself to the world was the Harp. Until the mid-1950s a mosaic Harp crest was proudly affixed to the exterior stadium wall. Its removal due to stadium renovation and the crests which replaced it resulted in decades of debate and disagreement.

This was compounded by the statistic that the club had never repeated the aforementioned 1902 Scottish Cup success, with Hibernian folklore replete with tales of a gypsy curse which said that until the Harp was restored the Cup would never return to the ‘Holy Ground.’

In 2000, a new club crest was created that incorporated the Harp alongside symbols which reference the club’s Edinburgh and specific Leith connections.

Fifteen years later and with the cup hoodoo still unbroken, the St Patrick’s branch had held discussions on how to commemorate the club’s upcoming 140th anniversary.

Members were aware that a branch member, Mark Shipway, had made an exact replica of the mosaic Harp that had once adorned the stadium wall and was willing to gift it to Hibernian FC. Discussions with the club ensued, culminating in the Harp mosaic being formally presented to then club owner Sir Tom Farmer at a formal ceremony in the Hibernian Supporters Association clubrooms.

In a particularly Hibernian twist of fate Sir Tom’s grandfather and great uncle had been custodians of the club at the time of the 1902 cup victory.

Hibernian entered the 2015/16 Scottish Cup Final campaign with a replica of the mosaic Harp crest back in situ within the stadium and two new wall mounted current crests, including the Harp, on either side of the club’s West Stand entrance.

What happened on that historic day of May 21, 2016 deserves an article of its own, but suffice to say that the hoodoo was broken and Hibernian won the Scottish Cup for the first time in 114 years.

When it came to the St Patrick’s branch deciding on their first significant post Scottish Cup Final historical project, there was a consensus that a permanent memorial to the club’s founder Canon Hannan in his home village of Ballingarry was something that was long overdue.

While the branch was discussing what form this memorial should take it became apparent that Hibernian FC did not intend to place the mosaic Harp on permanent display, as had been envisaged when gifted. Believing that this important piece of Hibernian iconography deserved to be permanently on show, the thought emerged that Ballingarry would be a fitting location for its permanent installation.

Initial contact was made with local football club, Ballingarry AFC, who were very aware of the Hibernian connection and were hugely receptive to the idea of a permanent memorial being erected at their football ground in the Canon’s home village.

The St Patrick’s branch also entered into friendly discussions with the Hibernian FC Board regarding the project and the possibility that the mosaic Harp could be re-gifted to the people of Ballingarry. With Hibernian’s willing agreement channels of communication were opened between Edinburgh and Limerick to scope out the logistics and the practicalities of undertaking this project.

With planning having reached an advanced level, a deputation from the St Patrick’s branch committee — led by Chairperson Dougie McLeod—made the pilgrimage to Limerick in January 2020 to meet their Ballingarry AFC counterparts including the now sadly departed James Clancy.

Their hosts provided a conducted tour of sites of local importance including what is understood to be the Canon’s birthplace, Our Lady of the Immaculate Conception Church and the Knockfeerina Famine memorial site. The visitors were also treated to a weekend of traditional Limerick hospitality with firm friendships being established and a provisional date of September 2021 being set for the Harp’s installation. Little could those present have envisaged the global pandemic that was to engulf the world shortly thereafter.

That pandemic put a temporary hold on the project and a revised memorial unveiling date of September 2022 was agreed. As society began to emerge from the COVID crisis work gathered pace at Ballingarry AFC’s “The Paddocks” ground to carry out all that was necessary for the Harp’s installation.

With that work now completed and the iconic Harp crest, accompanied by inscriptions describing the Canons Ballingarry heritage and role in founding Hibernian FC, now in place an official unveiling date of the 24 September has been set.

With the much-anticipated commemoration date of 24 September now imminent, there is a certain symmetry to the fact that the Football Club which Canon Edward Joseph Hannan founded as a direct result of a 19th century disaster was delayed due to a worldwide 21st century one.

To prevent the small idyllic town of Ballingarry being overwhelmed by visitors, the St Patricks’ and Ballingarry AFC branch committees have decided to cap the number of official travellers to 100. Those intending to travel to attend the ceremony please register their travel plans with Hibs@stpats.club.