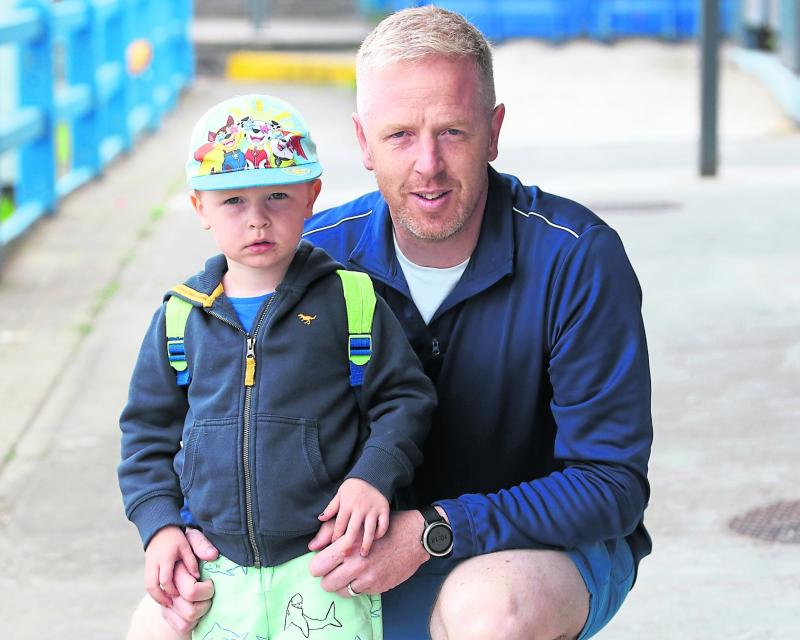 Barry and Tom Curtin watching the Premier Division fixture between Fairview Rangers and Regional Utd at The Fairgreen on Sunday Pic: Brendan Gleeson

IN the Premier A League joint leaders Geraldines pulled off a superb comeback to pip Newport for the points.

Jay Ryan and Brian O'Sullivan saw Newport race into a two-goal lead within five minutes. Jason Hughes pulled one back for the Dines but Darren Collins restored Newport’s two goal lead by half time.

Two goals from Kane Connolly after the break restored parity and the visitors snatched the points when Trevor Hogan struck the winner.

Jack Fitzgerald, Ian O'Donoghue, Ryan McLaughlin, Patrick Nathan, Darragh Reddan and Klorane Talbot-N’Dip were all on target as Corbally Utd eased past Granville Rgs and Fairview Rgs B were too strong for Moyross and goals from Tyrique Leamy 3, Evan Ezekannagha 2, Stan Ezekannagha and Jake Leamy did the damage.

In Division 1A, Regional Utd B kept up their superb start to the season with a 5-1 win over Castle Rvs. Gerry Fitzpatrick and Jeff Mannion scored two apiece and Rory Phelan also netted for the winners.

Caherdavin Celtic and Summerville Rvs shared the spoils at the Greenhills. Liam Morris scored for Celtic, Emanuel Alfred for Rovers.

A David Ryan double gave Pallasgreen the spoils at Kilfrush and Knockainey edged out Holycross by the odd goal in three. Chris Crotty and Conor Cleary scored for the winners. Noah Patterson replied for Holycross.

Mungret Reg lead the way in Division 2B following their 4-1 win over Patrickswell. Goals from Kuba Cieloch (2), Ian Moore and Aidan Earlie did the damage. Lee Carey replied.

Caherconlish kept up the pressure with a 4-1 win over Shelbourne thanks to goals from Dean Power, Robert Brock and a brace from Shane Henry.

After a couple of iffy displays, Glenview Rvs were most impressive on Sunday hitting a fancied Wembley Rvs for five. Dave Ahern, Sean Keane and a hat trick from Jack Delaney accounted for the winning goals. Dave Power replied for Wembley.

Goals from Kevin Moran (2) and Ben Frost helped Parkville to a 3-2 win over Aisling Annacotty C.

Corbally Utd B lead the way in Division 2A following a big win over Murroe B.

Sean Reeves Wasik scored twice for Aisling Annacotty D in a 2-0 win over Charleville while Lisnagry won 4-1 at Newport C. Daniel Toriola netted for the home side but goals from Jordan Clancy (2), Danny Byrnes and Eric Sheehan proved too much.

The Under 17 League kicked off on Friday with wins for Aisling and Fairview.

In the second division Newport beat Annacotty B 3-1 with scores from Shane Flanagan (2) and Ciaran Carey.

Herbertstown ran up a big score over a young Dromore side. Lukas Bzishvilli, Riann McNamara, Colm Bermingham, Reece Ranson, Griffin McCaffery and Gavin Hartnett were on the mark while goals from Diego Neves and Nathan Cross helped Geraldines to a 2-1 win at Caherconlish.