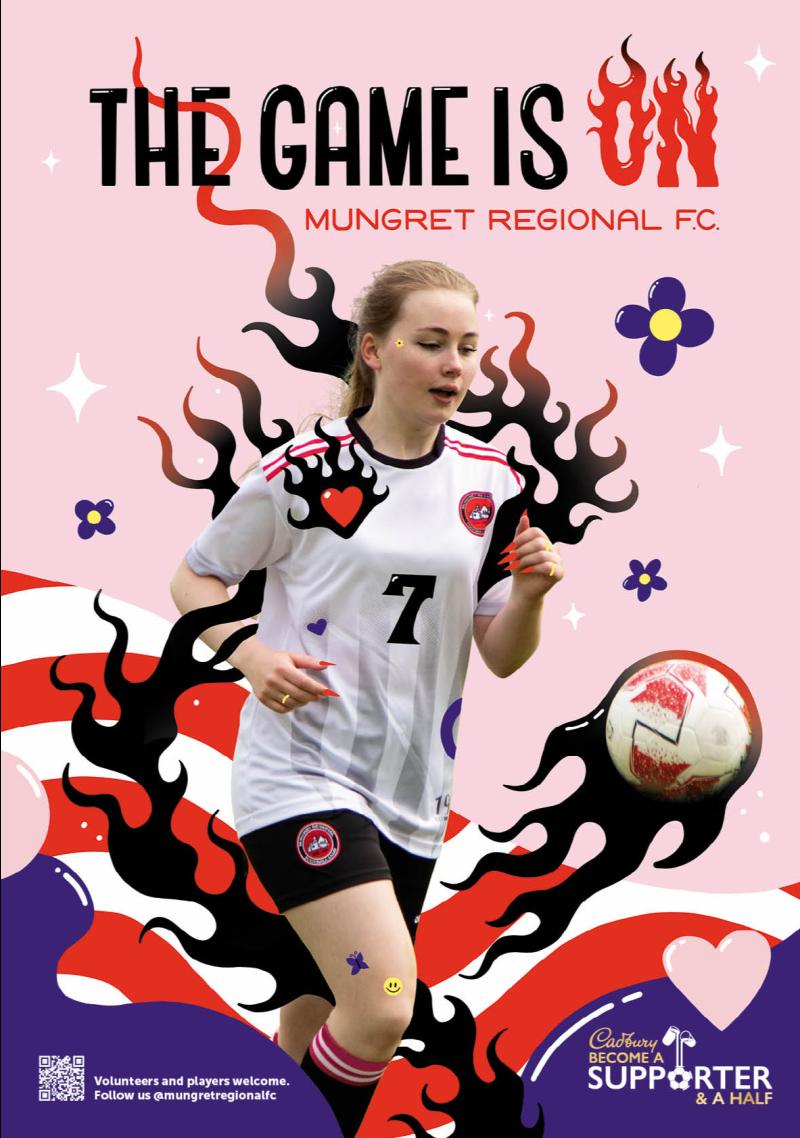 Mungret Regional FC are participating in 'The Game is On' initiative

CADBURY have unveiled a brand-new initiative, ‘The Game is On’, to help support Irish women’s grassroots football with the help of Arsenal legend Ian Wright and former Republic of Ireland Women’s National Team captain, Emma Byrne.

As the grassroots season gets underway, Cadbury have teamed up with ten clubs nationwide, including Limerick’s Mungret Regional FC, to help them promote their club on a local level with the creation of uniquely designed posters.

An additional poster has also been created for the Republic of Ireland Women’s National Team in advance of the Ireland v Finland game featuring Courtney Brosnan, Niamh Fahey and Megan Connolly.

Cadbury have created the ‘The Game is On’ initiative to ensure grassroots women’s teams get the visibility they deserve, with the aim of driving more interest in their clubs – whether that be more members, more supporters watching matches or recruiting volunteers, all essential elements to ensure that the grassroots women’s game continues to develop.

Speaking about their club’s involvement, Tony O’Byrne, Chairman of Mungret Regional FC, said; "This is a great opportunity to showcase and promote our community of women's footballers to the nation. We are delighted to be part of this whole initiative and be one of the many faces of football to inspire other women to enjoy the game.”

Each of the 11 posters developed have been created in conjunction with some of Ireland’s best female illustrators and designers. Along with Cadbury showcasing the clubs on dedicated advertising space such as billboards and digital screens, Cadbury are also donating the posters to clubs to use in a variety of ways including their social media channels, digital newsletters and physical posters, which will help them drive further interest in their club.

The launch of the ‘The Game is On’ comes with the evolution of Cadbury’s in-store promotion ‘Become a Supporter and a Half’ which is live in stores nationwide right now.

There are a range money-can’t buy prizes available for grassroots women’s teams including; a coaching masterclass with the Republic of Ireland Women’s National Team senior coaching team, attending a Women’s National Team training session followed by a meet and greet, a special Tour of the FAI HQ followed by private training session with FAI coaches, and finally, a meet and greet with Captain and Cadbury ambassador Katie McCabe.

To help Cadbury donate a range of money-can’t-buy prizes to grassroots clubs, consumers can go in-store and purchase a Cadbury product to show their support. For more information see https://womensfootball. cadbury.ie.

Managing Director of Mondelez Ireland, Eoin Kellett, said; “In 2022 it has been fantastic to see the Irish Women’s National Team getting the visibility and support they deserve, it has been an honour to be on this journey with them so far. We are also acutely aware of the grassroots women’s teams right around the country and ensuring they also get the visibility needed to continue to develop the game and break down any barriers to participation.

"Through ‘The Game is On’ and our in-store activity we hope that the Irish public joins us in supporting their local clubs and teams. Whether it is going in-store to become a supporter and a half or popping by a match to show your support to the local women’s team, you will be helping us raise the profile of grassroots women’s football.”

Also commenting on today’s announcement, FAI Grassroots Director Ger McDermott said; “On behalf of the Association and all our Grassroots players, I want to thank Cadbury Ireland for this latest initiative and for their ongoing support of football for women and girls across the country.

‘The Game Is On’ is an important new initiative which will inspire our Grassroots players as they look to follow in the footsteps of Katie McCabe and our senior women’s national team. We look forward to this campaign and to welcoming more players, volunteers and supporters to the beautiful game with the help of our partners at Cadbury Ireland.”