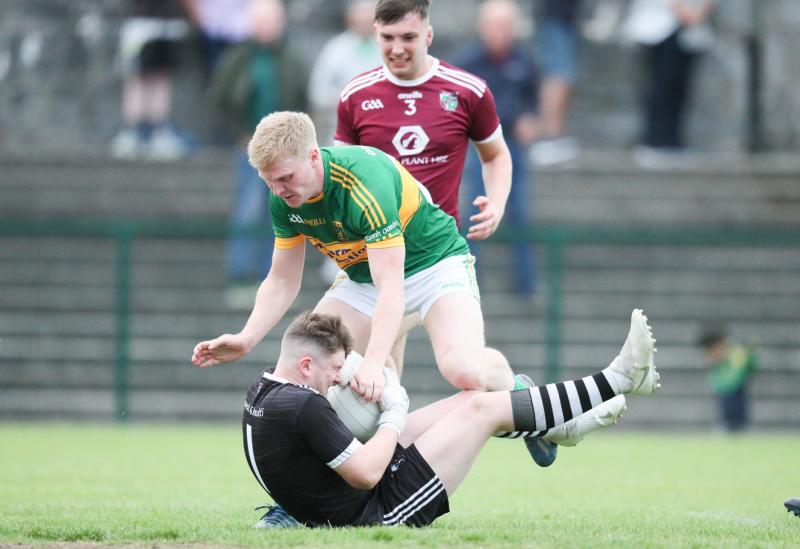 THERE were precious wins for St Kieran's and Claughaun as the third round action in the Irish Wire Products Limerick senior football championship came to a conclusion on Sunday night.

St Kierans made it three wins on the trot and secured their place in the knockout stages with a rather routine 2-12 to 0-9 win over a lacklustre Galtee Gaels outfit in Kilmallock.

Meanwhile, Claughaun secured a precious 0-13 to 0-8 victory over winless Oola at Caherconlish. The win brought Claughaun onto three points on the table following their earlier draw with Galbally.

A goal in either half meant that the men from the west held the lead from 9th minute all the way to the final whistle.

Anthony Molyneaux netted that first goal and they were four clear at the break. Eoghan McNamara, Tommie Childs and Bob Childs replied late in the half to keep the south side in touch.

The game was effectively over when Seamus Mangan found the net and from here St. Kieran's were able to coast to the victory. They had fine scores from Sean Ryan, Dylan Moloney and Noel Callanan during a dominant display.

Claughaun, who will face holders Newcastle West in their next outing on Saturday evening, had been level 0-6 to 0-6 with opponents Oola at half-time on Sunday.

However, the city side outscored their opponents 0-7 to 0-2 in the second half to record a precious win.

After Josh Ryan opened the scoring after just 20 seconds for Oola, both sides were level on three separate occasions in the opening 30 minutes.

Boosted by a flawless performance from Tadhg Bennett, and Cian Byrnes, both who scored eight points between them, Claughaun looked the likely winners when they opened up a two-point lead midway through the second half. At this stage, the momentum began to swing in the city side's favour.

Substitute Cian O'Donovan scored a superb long-range point to then make narrow the deficit to one with 15 minutes to go.

Despite being reduced to 14 men after Cian Graham received a second yellow card with six minutes to go, Claughaun held out with Bennett securing the five-point win with an injury time free - his fifth point of the evening.