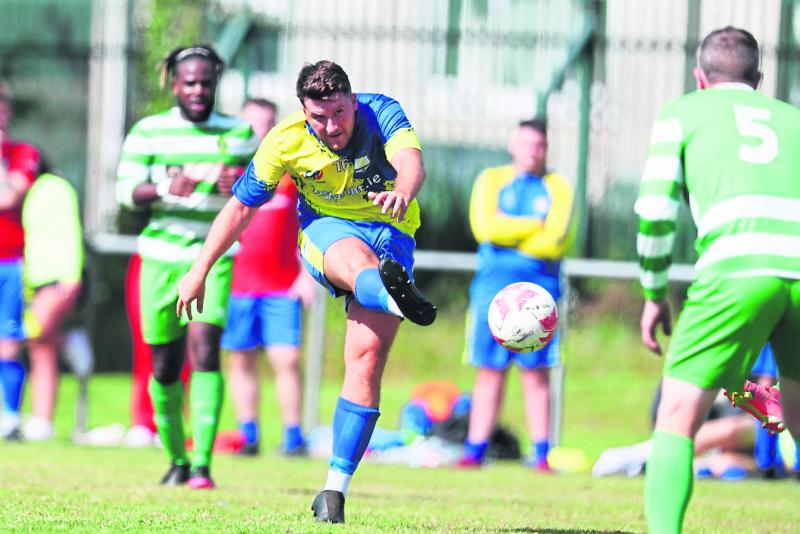 AISLING made it two wins from two when they beat Janesboro in Annacotty on Sunday.

As ‘Boro continue to build from a young squad, Aisling were favoured to record a comfortable win.
However, Bradley McNamara fired ‘Boro into an early lead to snap the home side out of their slumber.

AJ Moloney tied the game but once again ‘Boro struck through Jack Horan to regain the lead.
Aisling responded and levelled through Tony Whitehead.

A brace from Shane Clarke took the wind out of the visitors sails before Adam Foley completed the scoring for the home side.

Carew Park are also on full points after a 5-1 win at Coonagh in a sun-drenched Thomond Community College.
The game was evenly poised when ace poacher Jonathan Grant glanced Jamie O’Sullivan’s free kick to the net.

Minutes later Mark Slattery headed in at the back post from a superb Pat Boyle cross and it got worse for Coonagh when a defensive slip allowed Aaron Nunan in to make it 3-0 at the break.

Nunan, in the right place at the right time, added a fourth after the restart.

Gordon McKevitt scored a cracker to pull one back but the visitors had the last say when Grant’s uncanny ability saw him glance another header beyond the reach of Kieran Simmonds in the Coonagh goal.

Fairview Rgs took three welcome points in a tricky affair away to Nenagh AFC.
Conor Ellis scored the only goal of the game after 30 minutes when he finished off after man of the match Jason Cross headed back across goal from Shane Duggan’s free kick.

Nenagh had plenty of possession but struggled to create clear goal chances.

Champions, Pike Rovers made it two from tow when they travelled to Charleville and came home with the spoils.
Paudie Murphy opened his account for the Hoops to put them on the way.

Colm Walsh O'Loughlin fired in a second from the edge of the box and the same player turned provider before the break for Mikey Conlon to score his second in two games.

Charleville were good in the second half and pulled one back via Cian McNamara but that was as good as it got for the home side.

Following a late 1-0 defeat in their opener versus Pike, Balla were determined to get back into the groove and did so in style, hitting Mungret for five in LIT.

Cian Fitzgerald put  Balla ahead before Cian Power tacked on a second.

A goal either side of the break by Gbadebo Habideen put the tie to bed before Conor Keane completed the winners scoring.
Eoghan Ryan netted for a disappointed Mungret XI.