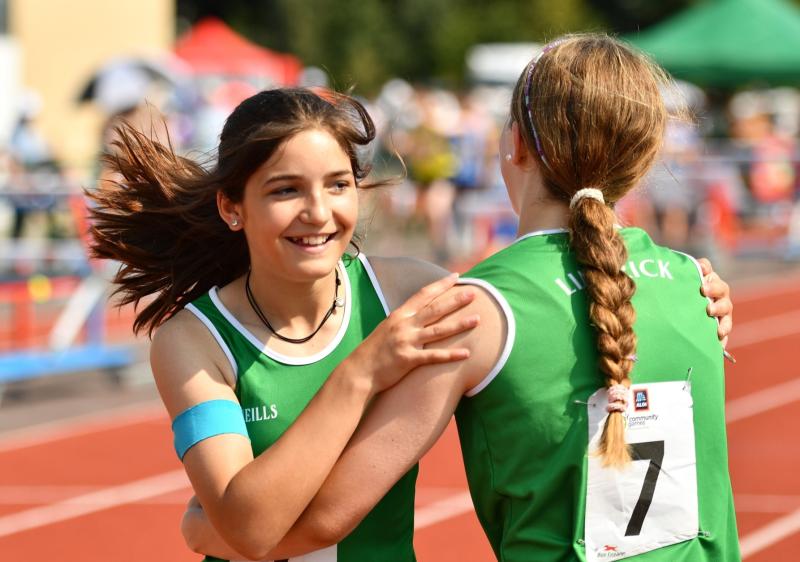 Isbeal Ní Huigín, left, and Megan O’ Shea, from Crecora-Patrickswell celebate after competing in the U13 4x100m mixed relay during the Aldi Community Games National Track and Field Finals in Carlow

The sun was shining for the return of the Curraghchase 10K last Saturday, after two years of virtual events due to Covid 19. There was a steady buzz around Kilcornan Community Centre from early on in the morning.

Just after 11am, with temperatures in the 20s, the foghorn blew and the race began. Both runners and walkers, young and old, took off towards Curraghchase Forest Park for the scenic 10k. The sea of blue and yellow, was something special and really brought those suffering in Ukraine to the forefront of our minds.

MC, Paul Fitzgerald, was there to cheer on John McKeogh, Kildimo, who was the first to cross the finish line at an impressive time of 33:46.

Final registration was close to 600 people, with proceeds going to Irish Emergency Alliance who are directly responding to the crisis in Ukraine.

James O’Hare took Gold in the Long Jump & Discus and Silver in the Javelin in the O70 category. Huge congratulations to Aogan MacDomhnaill who romped to victory in the M40 5000m, with a time of 15:53.40.

Aogan has now joined his sisters Sorcha and Ide who recently picked up medals in the National 5000m which were held in Dublin recently. Clubmate Tom Galvin picked up Silver in the Shot Put and Javelin in the M55.

John Sheehan (Dooneen) won Gold in both the M60 Discus and Javelin plus Bronze in the Shot Put. Paul Phelan won Silver in the M40 Long Jump. In the Women’s section Olga Nedve (Dooneen) won 3 Golds, setting two records in the F35 Shot Put and Weight for Distance.

Community Games
Carlow IT was the venue for the Aldi Community games National finals on Saturday. Despite the heat all Limerick qualifiers gave their all with many coming home with medals.

Limerick won gold in both u14 boys and girls Long Jump competitions with Áine Frawley (Bruree Rockhill)and Josh Devlin (Murroe) both excelling. Emer Purtill (Regional) completed a fine season with gold in the U14 javelin. Megan O Shea (Crecora Patrickswell) U 14 also took gold in her u14 80 m hurdles.

Silver medals were brought home by our youngest athletes in the U8 60 m, Saoirse Higgins (Adare) & U8 80m (Ciaran McLoughlin Drom Broadford). Tom Keogh (Monaleen) also won silver in the u 10 200m. Robert McCutcheon (O. L. Lourdes) was the silver medalist in U12 ball throw.

Bronze medals went to u 12 boys and u 16 mixed (Regional) and u 14 boys Caherdavin. Regional girls U14 claimed 4th place medals. Special mention to Feohanagh Castlemahon's U10 mixed relay team who narrowly lost a semi final spot in their heat.
They truly gave it their all and will be back again in the future.

Limerick Community games was well represented across events with more not having podium finishes but wonderful experiences and new friends met and of course plenty ice cream too.