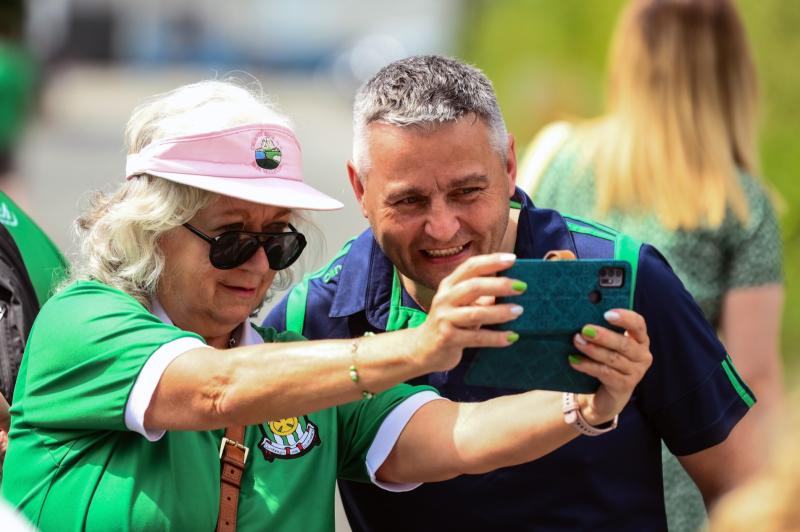 FORMER Limerick hurler and team manager TJ Ryan is celebrating a thrilling win on the racecourse.

Racing enthusiast Ryan is one of the driving forces behind the Caman Racing Club which had its colours carried to success by Katie Tay on the final day of the Tramore's August Festival 2022.

Garryspillane clubman TJ Ryan and All-Ireland winner Landers, who are guests on the Irish Examiner GAA podcast, got to lead race winner Katie Tay, trained by Willie Mullins and ridden by his son Patrick, back into the winners enclosure after Sunday's race.

Irish Stallion Farms EBF INH Flat Race winner Katie Tay proved a length and three quarters too good for runner-up One for Lucy at odds of 8/13.

Meanwhile, Pat O’Donnell’s small string have been running consistently of late and the Kilmallock trainer made the most of being able to call on Rachael Blackmore, as Ardamir provided him with his first winner of the National Hunt season in the Broderick’s Electrical Claiming Hurdle at Ballinrobe on Monday last.

Scenes at @TramoreRaces with The Caman Racing Club, who boast 400 members, out in force to greet bumper winner Katie Tay.

Blackmore picked up the spare due to an injury to Denis O’Regan and she was happy to sit in rear until making headway just after half-way of the two-mile contest, only taking it up 150 yards from the last and the pair kept on well to score by two and a half lengths.

Ballingarry-based trainer Richard O’Brien has been making his rare forays into the jumps scene pay and he provided Danny Mullins with the first leg of a double as Surac was delivered late, having been prominent most of the way, to land the spoils in the JJ Burke Peugeot 3YO Maiden Hurdle by three-quarters of a length.

It really was a red-letter day for the Limerick contingent in the west as trainer/jockey father-and-son duo, Charles and Philip combined to deliver the 2m6f Red Mills Irish EBF Auction Maiden Hurdle with Vinnie Is Busy. The teenaged Byrnes got his fractions right from the front on the 11/10 favourite, keeping enough in the tank to pull away after the last.

Chris Hayes took the closing honours at Leopardstown on Thursday evening, as the Dermot Weld-trained Giladah recovered from a tardy start to claim her second handicap of the season, the Sadettin Atig Memorial Handicap over nine furlongs.

"The start of something beautiful, we hope"

A fabulous way to end the @TramoreRaces Festival with connections of Katie Tay in jubilant mood with @irishkor pic.twitter.com/lxg4VPzFrv

The three-year-old filly was put into a prominent spot quickly by Hayes despite not coming out of the stalls well, making his move as soon as they turned into the straight and the filly showed tremendous battling qualities to hold off the fast-finishing Highland King by a neck.

Down at Tramore the same evening, Conor McNamara hit the target and it was a deserving success for Leslie Young’s consistent He’s Leading Me On in the Mary Hearn Memorial Handicap Hurdle. McNamara gave his mount his head going into the dip and only needed to push the five-year-old out to secure a nine-length verdict.

Billy Lee maintained his good run and bagged the feature at Cork on Friday, the Group 3 Irish Stallion Farms EBF Give Thanks Stakes with the progressive Paddy Twomey-trained Rumbles Of Thunder, who was held up and always travelling well, ridden to lead inside the furlong marker, asserting to oblige by two and a quarter lengths.

Recent RACE graduate Oisín Enright had a day he will never forget at The Curragh on Saturday, as he booted home a winner on his very first ride, keeping his cool to thread through horses and bring the Dermot Weld-trained Thaleeq from off the pace to record an emphatic two-length victory in the Sycamore Lodge Equine Hospital Derek O’Sullivan Memorial Apprentice Handicap.