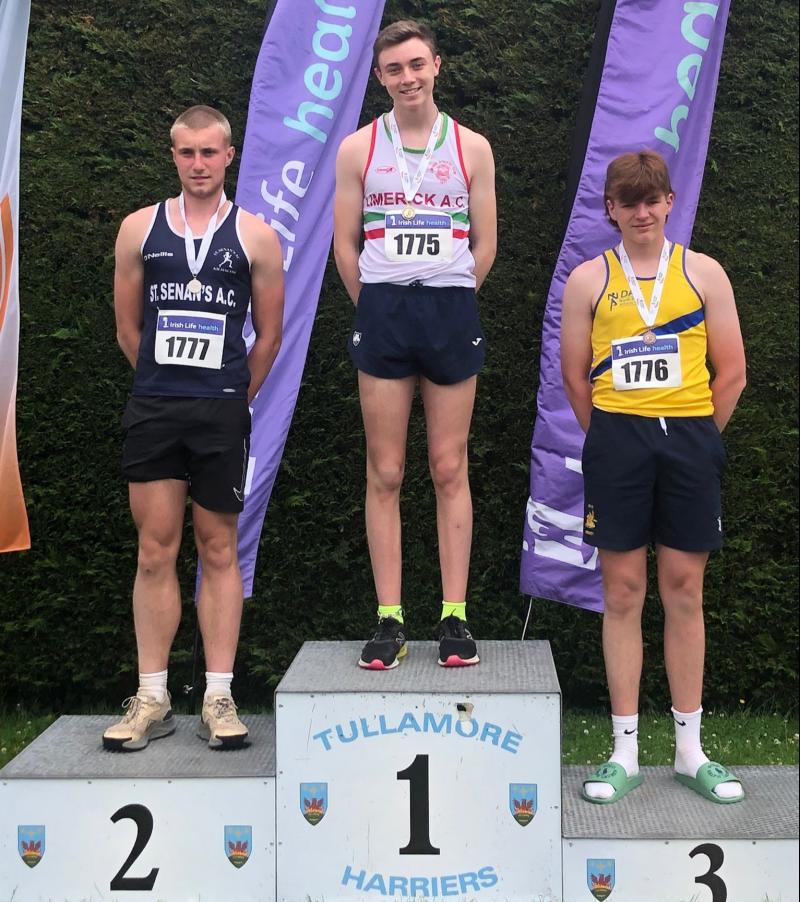 Aaron O’Connor, representing Limerick AC, being presented with the gold medal, after winning the National Outdoor Under 18 Triple Jump title in Tullamore

Juvenile B Championships and Inter Club Relays
YOUNG athletes from across the country battled it out for glory in Tullamore last weekend.

It was a successful competition for Dooneen AC. After 3 tough heats the U14 girls 4x100m final filled with excitement. Dooneen AC came out on top after the final leg with 50.80 on the clock from Kilkenny City Harriers in second on 52.30.

On Day 2 at Junior there was a Gold Medal for Laura Frawley in the High Jump, winning on countback with 1st and 2nd tying on 1.65m.

The Emerald athlete also took Bronze in the Long Jump with Dooneen’s Leagh Moloney fourth. Gaelcholaiste Luimnigh student Moloney was also third in the 100mh in 15.01. Victoria Amiadamen, (Dooneen) fresh from Ireland duties was second in the 400m.

1972
A YEAR in which Limerick bridged a 30 year gap to win the All Ireland Hurling title, a St Munchins College team featuring Niall O’Shaughnessy won the Senior All Round Trophy at the Munster T&F Championships in the Mardyke Cork.

It was the beginning of an era of dominance for Munchin’s in which they won All Ireland titles and produced great athletes. The original College were Senior Relay Champions.