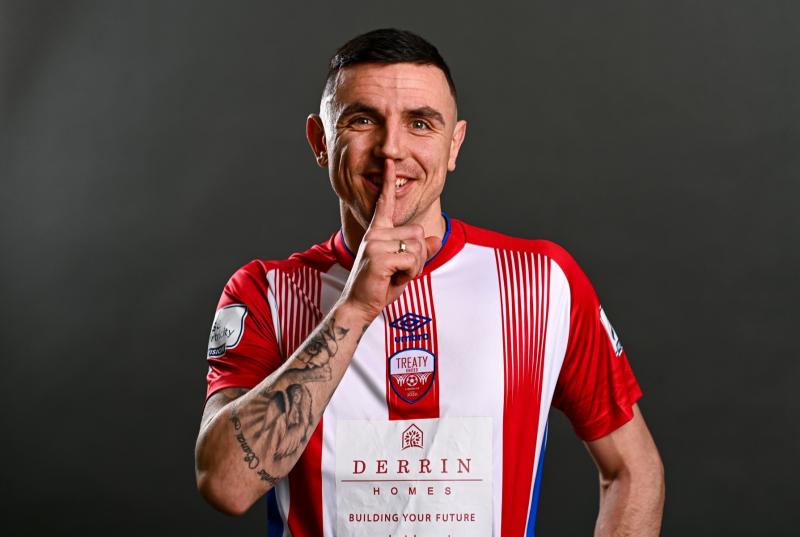 Enda Curran, who netted twice for Treaty United against Bray Wanderers at the Carlisle Grounds on Friday night

RESILIENT Treaty United moved back into the promotion play-off positions in the SSE Airtricity League First Division after scoring a precious 2-0 victory over Bray Wanderers at the Carlisle Grounds on Friday night.

Treaty took full advantage of fifth-placed Wexford having a bye week in the league when two goals from Enda Curran helped Tommy Barrett's side secure all three points from their trip to Bray and help the Markets Field-based side leapfrog Wexford in the league table.

Fifth-placed Treaty now enjoy a three-point lead on sixth-placed Wexford who do have a game in hand on their promotion play-off chasing rivals.

Treaty have showed admirable resilience in recent weeks following their heavy defeat at home to high-flying Cork City to record a hat-trick of wins against Athlone Town, Longford Town and now Bray Wanderers.

Treaty have lost just one of their last seven games and have taken 14 points from a possible 21 during that period.

Bray had won just one of their last five fixtures prior to kick-off on Friday evening. However, that success came in their most recent outing away to Athlone Town a week ago.

Treaty United hit the front as early as the seventh minute when Enda Curran netted from the penalty spot. A mistake from Bray's Conor McManus led Jack Hudson to foul Curran inside the penalty area and the in-form striker made to mistake with the spot kick. Early lead for the away side.

Bray did threaten to draw level with the visitors seven minutes later as Darragh Lynch broke through on Treaty 'keeper Jack Brady. However, the netminder did very well to block the effort on goal.

On 16 minutes, Bray created a promising attack when McManus and Fox combined on the left wing to find Darragh Lynch. However, his low drive from the edge of the box was gathered at the second attempt by Brady.

Treaty then lost captain Jack Lynch to injury on the half hour mark and he was replaced by new signing Ben O'Riordan who was making his debut for the club.

The visitors then threatened a second goal on 35 minutes, but the lively Willie Armshaw hit his shot at goal straight at Bray 'keeper Kelly.

Treaty then doubled their lead in the 52nd minute when Curran struck for his second goal of the game.

Marc Ludden created the opening with a pin-point cross-field ball left to the right of the box. Goalscorer Curran then hit a volley into the ground which bounced up beyond Bray 'keeper Kelly and into the net.

A disappointing night for Bray continued when centre half Joe Gorman was dismissed in the 85th minute of the contest.

Treaty took full advantage of their numerical advantage to close out an impressive victory.