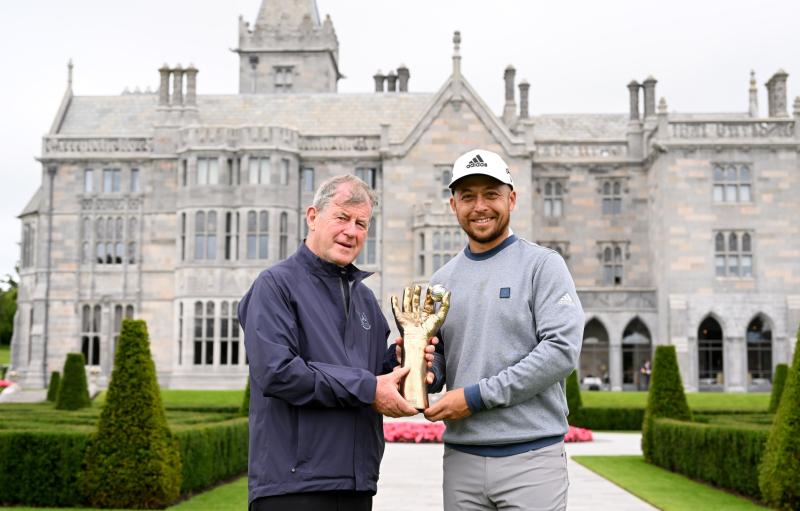 Xander Schauffele pictured at Adare Manor with the 2022 JP McManus Pro-Am trophy, after winning the professional individual prize with a score of 10 under par

AMERICAN golfer Xander Schauffele reigned supreme after the two-day JP McManus Pro Am came to a thrilling end on Tuesday evening at the Adare Manor Hotel and Golf Resort.

Schauffele today shot a two-under-par round to seal his win, following his course record on Monday.

Almost 40,000 spectators attended the two-day event - the sixth staging of the Pro-Am - with many millions once again raised for Irish charitable organisations.

Schauffele laid the foundation for the win after taking a three-shot lead into Tuesday final round in Adare.

The Olympic champion fired eight birdies in a brilliant bogey-free start to the 36-hole contest. The American's round of eight-under 64 gave him a significant advantage heading into the final 18 holes.

He picked up three more birdies in his second round to go with just one bogey to set the clubhouse target after the morning starters had completed their rounds.

Fellow American Sam Burns carded a seven-under 65 on the final day to finish second on nine under. Ireland's Shane Lowry shot 67 on Tuesday to finish a further stroke back in third place.

Tiger Woods who again drew a large gallery around the magnificent Adare layout, followed an opening-round 77 on Monday with an improved 74 on Tuesday.

Meanwhile, the team event was won by the Gerry McManus team, comprising of Mark McManus, Cormac McManus and Gerry McManus.

The team, who played with former multiple Major winner Mark O'Meara in the second round, finished with a score of -37. The winners had four shots to spare over the PGA Catalunya team.

In fourth place was the Aisling Annacotty AFC team.