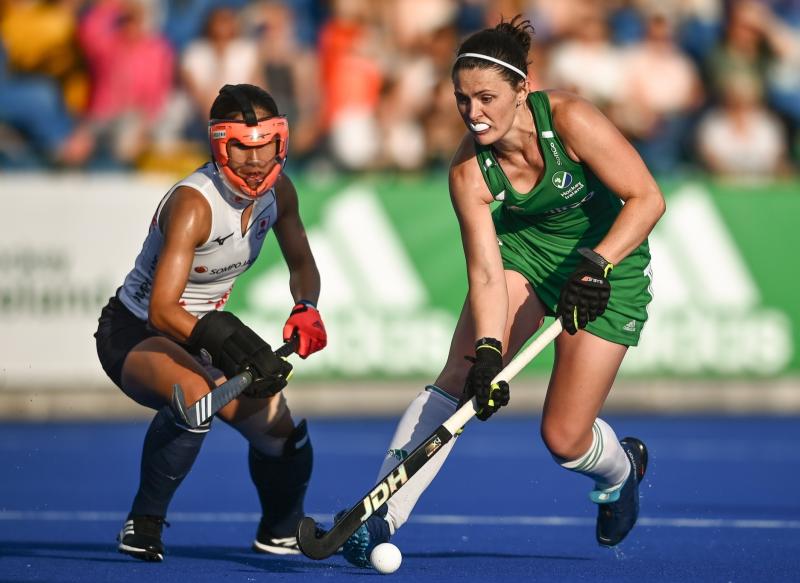 Róisín Upton, of Ireland, in action against Miki Kozuka, of Japan, during the SoftCo Series match between the sides at the National Hockey Stadium in UCD

LIMERICK’S Rosin Upton and her Irish team-mates play their opening pool game of the 2022 Hockey World Cup  against holders the Netherlands in Amsterdam later today, Saturday

Upton is the team’s vice-captain and one of five players that remain from the groundbreaking 2018 run to the World Cup final.
She is joined in the Irish squad by her Catholic Institute club-mate Naomi Carroll.

After warm-up games against Japan, Ireland’s World Cup starts off this Saturday July 2 against the hosts and current world number one side, the Netherlands, (5.30pm), with the 9,500-strong venue already sold out.

Next on the agenda is a July 5 date against tournament debutantes Chile (world rank: 17) before concluding the group stage on July 6 against Germany (world rank: 5).

Top spot in the group advances direct to the quarter-final stage with the second and third place nations, facing an extra game to reach that stage in the crossover playoffs.

Fourth in the group will go into the 9th to 16th place playoffs.

Ireland’s initial run of fixtures take place in Amsterdam and if they can emulate their 2018 run, the semi-final and final will be played in Terrassa, Spain.

“The World Cup is always a tough tournament but what a great challenge to be playing the best team in the World, first game up, in front of their home crowd,” said Irish Coach Sean Dancer.

“We have set our sights firmly on a positive result versus Chile, and will approach the playoff games day by day, when we get to that point.”

Dancer added: “The team are excited about our progress and the opportunities that lie ahead over the next month, and know that anything is possible at a World Cup”