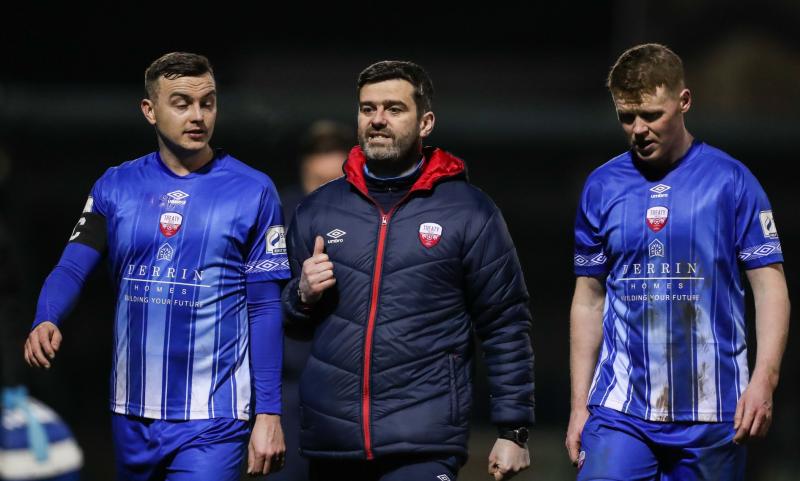 FRESH from victory over basement side Athlone Town, Treaty Utd face the two leading teams in First Division this weekend.

This Friday evening, the Limerick senior soccer side are in Eamonn Deacy Park to play table toppers Galway Utd at 7.45.

Then next Monday, June 27, Treaty Utd welcome second placed Cork City to the Markets Field at 7.45.

Tommy Barrett's Treaty are looking to consolidate their fifth place position to hold off Wexford and Bray Wanderers, while making in-roads on Longford Town and Waterford above them in the league table.

Treaty Utd manager Tommy Barrett is under no illusions as to the challenge Galway and Cork will pose.

“It's a free shot in those games. They’re difficult but we have to go out and try and win every game,” said Barrett of playing the leading sides in the First Division.

“Now we have to be a lot tighter – we can’t give up the chances we gave up tonight,” he said after the 2-1 win over Athlone Town last weekend.

“I was nervous. We didn’t kill it off. I thought we were nervous-looking. We should have been three or four-up before they scored,” said the Treaty manager of the win over the midlanders.

An early double from Dean George and Jack Lynch ensured that Thomas Oluwa’s striker was little more than a warning, as the hosts consolidated their fifth-place playoff spot against Athlone.

While Treaty were unbeaten in four of their previous five games, they had not recorded a win since the middle of April against Wexford.

“If you look at the players – I thought Jack Lynch was excellent; I thought he was really good. The two boys in the middle were good and the two lads out wide were okay. You always leave teams in with a chance if you don’t kill them off and they should have scored in the second half for sure,” recounted Barret of the 2-1 win.

Jack Lynch scored the crucial second goal thanks to an audacious free-kick from near the halfway line but Tommy Barrett jokingly suggested it was all his doing.

“I told him to do it” he explained.

“He was right next to me. It is (a fantastic example of his awareness) but I’m claiming an assist on that one.

“I just spotted it that minute and he was next to me in the dugout and I just said to hit it and go for it and he did. I was slagging him at half-time telling him I’m definitely getting an assist on that one.” said Barrett.