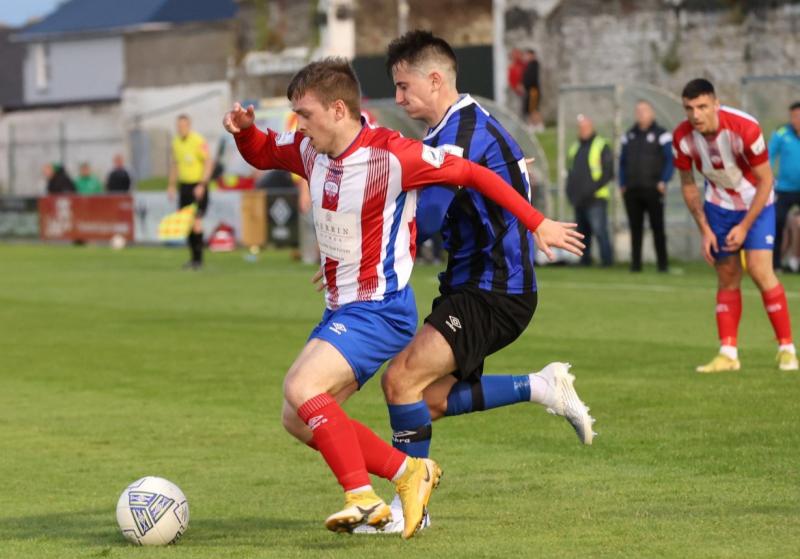 Treaty United's Willie Armshaw on the attack in their First Division fixture with Athlone Town at the Markets Field on Friday night Picture: Kieran Ryan-Benson

An early double from Dean George and Jack Lynch ensured that Thomas Oluwa’s striker was little more than a warning, as the hosts consolidated their fifth-place playoff spot.

In a sense, you could look at Treaty United’s recent run of form in two ways.

Yes, they were unbeaten in four of their previous five but they’d not recorded a win since the middle of April against Wexford.

The defensive resilience that last year’s outlier was based upon appears to have disappeared into thin air as Tommy Barrett’s unit have kept just one clean sheet in their last seven.

But sometimes you need a cleanser. And a home game against the worst side in the country was exactly that.

The hosts made four changes from their draw at Wexford last week, with Sean Guerins, Stephen Christopher and Joel Coustrain coming into the XI – but most notably of all, Conor Winn, who struggled massively last time out against Cork City – replace Jack Brady.

Ironically enough, Treaty United’s lack of structure in attacking patterns has always been subsidised by a few aces.

Within the opening seven minutes of this contest, we saw two of them.

First, after just five minutes, Marc Ludden’s long throw was flung in towards the penalty spot where club top scorer Dean George’s header bounced and trickled in off the far post.

For all that George was a shrewd bit of business last year, his rise to prominence this year has paid serious dividends and you can now make a case for him being ahead of Enda Curran in the pecking order.

Secondly, barely 90 seconds later, Treaty United had a free-kick on the halfway line.

Jack Lynch missed a few games this year through work commitments and while his footballing career to this point has been a slow burner, it’s his intangible that make him such a valuable asset to Tommy Barrett.

While nobody in the ground was watching, Athlone ‘keeper Andrew Skerritt included, Lynch nonchalantly lobbed him from 50 yards and proceeded to parade the pitch like he owned it.

But Treaty United, incredibly, hadn’t won any of the previous three games in which they’d scored twice or more.

And lasting just 13 minutes before conceding to Thomas Oluwa here must have had them second-guessing themselves once more.

Tommy Barrett’s one wish over the last two months would have been a bit of calm, and despite having the bones of 70 minutes to equalise, Athlone were found wanting – a much-desired change in fortune for Treaty.