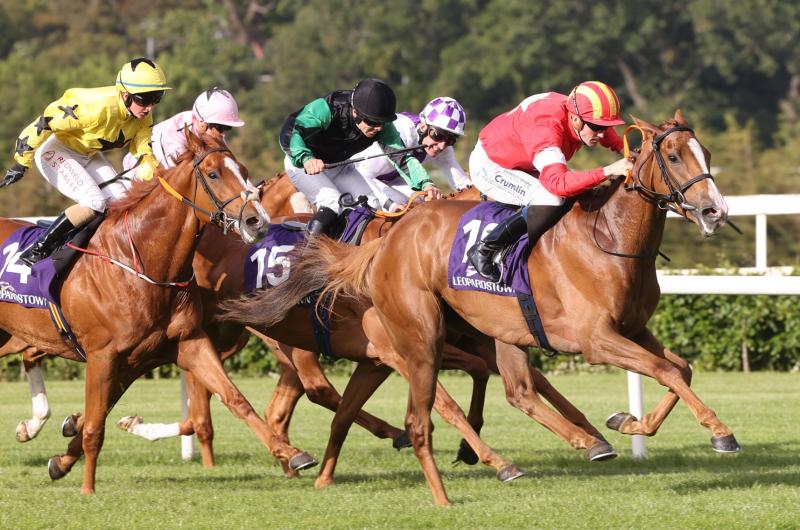 The in-form Limerick horseman linked up with Willie McCreery to take the five-furlong maiden on the newcomer Funchal. An 8/1 shot, she didn’t make the best of starts but flew home on the rail to score by a length and a quarter from the Willie Browne-trained De Velara.

A bigger winner came in the shape of the much-improved Rosscarbery, trained by Paddy Twomey, which got the better of the Ger Lyons-trained Yaxeni to take the Group 3 Munster Oaks Stakes. In owner Robert Moran’s colours the four-year-old made it four wins in a row when scoring by a neck at odds of 11/4.

Lee’s winning run continued at Leopardstown the following night where Helpmeout, another trained by Willie McCreery, took the eight-furlong handicap. A strong 7/2 favourite, the three-year-old led inside the final furlong to beat Gavin Cromwell’s The Last Swallow by a length and three-quarters.

Dermot Weld beat McCreery to the line to win the nine-furlong fillies’ handicap with Giladah. Another well-supported 7/2 chance, she raced up with the pace under Chris Hayes, leading at the furlong pole to score by half a length from the Nathan Crosse-ridden 3/1 favourite Coill Na Sionainne.

Billy Lee rode the first of his weekend winners as Arielle gave Curragh trainer Ken Condon the first leg of a double at Fairyhouse on Friday. The 15/2 chance took the three-year-old handicap over six furlongs for owners Treadstone Bloodstock, a race that saw Condon record a 1-2 with Jupiter Express only half a length behind the winner. Sheridan got his turn 35 minutes later as the Charlie Bit Me Syndicate-owned Moss Tucker completed Condon’s double in another of the six-furlong handicaps.

Condon supplied Billy Lee with his fifth winner of the week when Marhaba Ashmayme won the concluding eight-furlong maiden at Limerick on Saturday. A strong 6/5 favourite, the three-year-old made virtually all the running to score by a length and a half from the Denis Leahy-trained Blueberry Jack and Emmet McNamara.

Shanagolden jockey Chris Hayes and Dermot Weld combined for another winner as Kayhana scored a 7/1 success in the opening seven-furlong maiden for two-year-olds. She had a little in hand and she won by a length from the Joseph O'Brien-trained 85/40 favourite All Things Nice.

Conor McNamara wrapped up a double for Gordon Elliott at Downpatrick on Saturday where he won the near three-mile handicap chase on 9/2 joint-favourite Getaway Goldie. In the colours of the Royals, Lillies & Blues Partnership, the six-year-old came from off the pace to win by three lengths from his main market rival, the John Queally-trained Pat Coyne.

McNamara was a winner again at Downpatrick on the following afternoon where the Henry de Bromhead-trained Downtown Queen captured the two-mile three-furlong maiden hurdle. This time McNamara made much of the running on the John Battersby Racing Syndicate-owned 4/1 chance to win by a length and a quarter from the Joe Murray-trained 5/4 favourite Rodney Bay.

Mark McDonagh rode perhaps a more welcome winner as far as punters were concerned when taking the opportunity handicap hurdle on the Tom McCourt-trained Dollar Value. The 6/4 favourite was clear from the third-last hurdle as he won by all of 25 lengths from the Gordon Elliott-trained Britzka.

Mark McDonagh added to Sunday’s gains when landing another winner at Listowel on Bank Holiday Monday. He teamed up with County Kilkenny trainer Eoin Griffin to take the two and a half-mile handicap hurdle on Navigator Jack which runs in the colours of Darragh McDonagh, Mark’s uncle, and Dominic Murphy. The 11/1 shot raced clear rom before halfway and battled well when challenged by the John Queally-trained Gringo D’ainay at the final hurdle to win by a length and three-parts, a third winner in two days for the Cratloe conditional after his Kilbeggan double 24 hours earlier.

Bruree-based trainer Enda Bolger and amateur rider Aine O'Connor took the hunters’ chase with JP McManus’ fine servant Stand Up And Fight. A 2/5 favourite, the 10-year-old led with a circuit to race and scored by an easy 11 lengths from the Stuart Crawford-trained Stamp Your Feet.