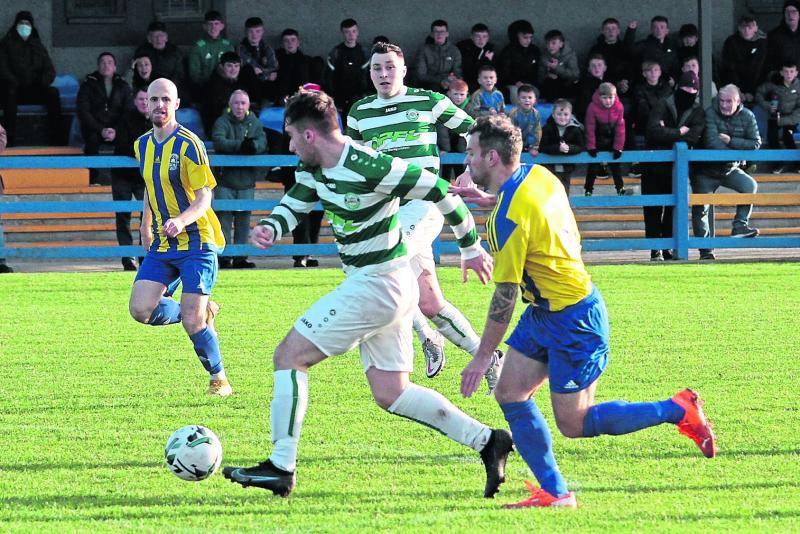 Adam Lipper, of Pike Rovers, on the attack against Fairview Rangers in their Premier Division fixture at The Fairgreen earlier this season Picture: Brendan Gleeson

GREAT rivals Fairview Rangers and Pike Rovers are set for a league deciding Premier Division play-off this Sunday after the sides finished level on points following their final round of regular season games on Thursday night.

The two sides came into Thursday's night games deadlocked on points and both duly won their final round fixtures. Free-scoring Fairview Rangers recorded an emphatic 4-0 win away to Regional United at Dooradoyle.

Meanwhile, Pike Rovers made their trip to North Tipperary a successful one when recording a deserved 2-0 victory over Nenagh AFC.

The destination of the Limerick District League's Premier Division title will now be decided on Sunday when Fairview Rangers and Pike Rovers go head-to-head in their play-off fixture at the Fairgreen at 10.30am. The venue was decided by a coin toss.

Should the teams remain tied after 90 minutes, the result will be decided by a penalty shoot-out.

Fairview and Rainsford added a second goal in the third quarter to ease the Fairgreen side into a 2-0 lead.

Conor Coughlan then added a delightful third goal for the 'View, taking off on a run before dinking the 'keeper from inside the penalty area to make the game safe.

AJ Moloney then added a fourth goal for the clinical winners.

Player-manager Robbie Williams scored Pike's first half goal when he fired a terrific right footed half volley into the top corner to the net.

Pike then wrapped up the points late in the second half when Steven McGann netted their second goal following good work by Eoin Hanrahan in pressurising a defender to help create the opening.

Sunday's league play-off game will be the first of two crucial meetings between the sides in the space of four days.

Fairview and Pike are also due to meet in the Lawson Cup final on Thursday next, June 9 at Jackman Park at 7pm.