Treaty United undone by Waterford in second half at RSC 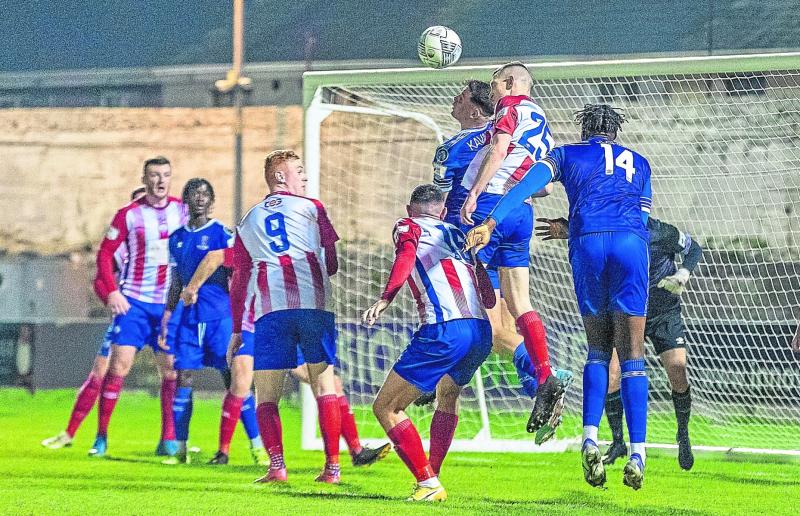 Mark Walsh clears the danger for Treaty United in their First Division meeting with Waterford FC at the Markets Field in March Picture: Kieran Ryan-Benson

A STRONG second half display saw in-form Waterford FC inflict a disappointing 4-0 defeat on Treaty United in their SSE Airtricity League First Division fixture at the RSC on Friday night.

A hard fought Munster derby had remained scoreless at half-time. However, four second half goals helped fourth-placed Waterford secure their sixth league win on the bounce and consign the visitors to a frustrating loss on the back of three successive home league draws.

This was the first time in the league this season that fifth-placed Treaty had lost to a side outside of the top two sides, Cork City and Galway United.

The league now enters the mid-season break until Friday, June 10 when Treaty United make the trip to Ferrycarrig Park to take on Wexford FC.

Treaty United manager Tommy Barrett named the same starting XI as began their 2-2 draw with Cobh Ramblers at the Markets Field seven days earlier for the trip to the RSC.

Joel Coustrain and Fionn Doherty did come onto the substitutes' bench for the latest Munster derby.

The sides last met back in March in the Markets Field when goals from Matt Keane and Enda Curran saw the Limerick-based side take all three points.

Ahead of kick-off at the RSC, Treaty sat in fifth place in the First Division table, 10 points behind the third-placed Blues.

Waterford came into the match on the back of a 3-0 win against Longford Town in Bishopsgate last Saturday night.

Treaty created the best opening for either side of a tight first half on 41 minutes when Matt Keane turned smartly before pouncing on a loose ball and flashing a smart effort goalwards from inside the penalty area. However, home 'keeper Murphy was equal to it.

At the other end of the pitch, Treaty 'keeper Jack Brady produced a smashing save from Kilian Cantwell to keep a Waterford header from entering the net in front half stoppage time which ensured the sides were deadlocked 0-0 at the interval.

Waterford hit the front six minutes into the second half when Louis Britton fired the home side in front as he was on hand to score following Roland Idowu's initial strike.

The home side then scored two goals between the 62nd and 66th minutes to wrap up the three points.

Phoenix Patterson created the opening for the second goal breaking down the left, before pulling the ball back for Roland Idowu to score.

Waterford then added a third goal through Shane Griffin to make it 3-0.

The game saw Fionn Doherty make his Treaty United senior League of Ireland debut when introduced as a substitute in the second half.

The home side made it 4-0 in the final minute when Patterson's corner was headed back across the goal by Cantwell, before Cian Kavanagh rose highest to head the ball home and complete a disappointing second half for Treaty.