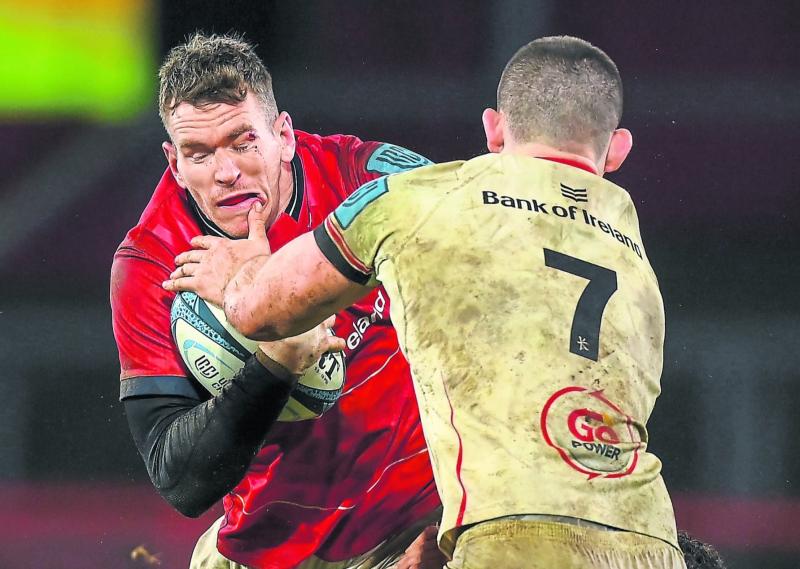 Chris Farrell, of Munster, in action against Nick Timoney, of Ulster, during the URC meeting of the sides at Thomond Park this season

THE fixture details have been confirmed for Munster Rugby's United Rugby Championship quarter-final meeting with Belfast.

Johann van Graan's Munster side, smarting from their final round regular season defeat to Leinster at the Aviva Stadium on Saturday, will take on interprovincial rivals Ulster in their 'Final Eight' clash at Kingspan Stadium on Friday, June 3 at 7.35pm.

Should Munster overcome Ulster, they will be away to either the Stormers or Edinburgh in the semi-finals of the URC.

The Vodacom Bulls will host the league’s first-ever Play-Off game on South African soil when they face Cell C Sharks in Pretoria at 12:45pm Irish time. The action then returns to the northern hemisphere as Leinster take on Glasgow Warriors in Dublin at 3.15pm before Edinburgh’s trip to Cape Town to face the DHL Stormers at 6pm.

The timings of each game have allowed for the possibility of extra-time and a place-kicking competition. In Ireland, the Ulster and DHL Stormers fixtures will be available live on TG4 with the Leinster and Vodacom Bulls games screened by RTÉ.

All four games in the Final Eight will be broadcast live in the UK and Ireland by Premier Sports and by SuperSport in South Africa while URC TV will serve fans in Ireland and internationally.