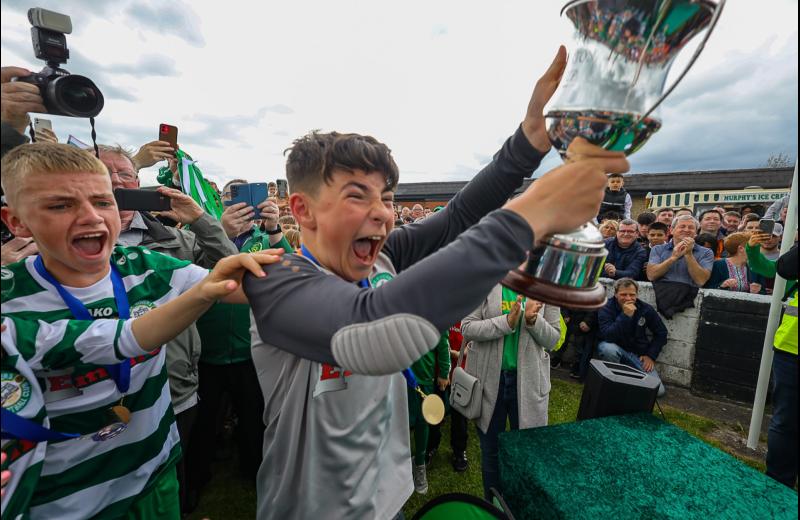 The game took place in a immaculate Janesboro FC pitch and one of the biggest crowds in many years took in this Cup Final, witnessing a truly brilliant ball game unfold.

The Hoops settled quickly and eights minutes in Ryan Lipper played an astute ball into the path of the on-running Josh Daly and he fired his effort just over.

At this early stage the influential Maddison McGuane was beginning to dictate matters as this young lady has a very bright future in the game as she won a great ball just on the half way and then with the deftest of touches linked up with Alex Meaney who whipped in ball that just flashed outside the angle.

Moments later at the the opposite end of the park, St Kevin's broke quickly with Max Dunne playing the ball over the Pike defensive line. As Mason Slevin seemed destined to score, a wonderful sliding tackle by Paddy Casey who showed good pace to track back and his tackle was timely to cut out what seemed a certain goal.

After this, the game ebbed and flowed for a period as each side carving out a chance or two but it was defenders that were winning their respective battles with the first half coming to an end. Then in added time a St Kevin's defender seemed to panic as his back pass finished up going out for a corner and the Hoops reaped dividends when Josh Daly's brilliant ball to the back post seemed to evade all but the alert Maddison Mc Guane, who kept her composure as cool as you like to drill a cracker of a shot to the net from close range, much to the delight of the large home support.

On the turn over all expected a quick response from the Dublin outfit, but it was Pike who rattled them early on as a neat move involving Paddy Casey, Martin Hogan and Ryan Lipper saw the latter's sublime pass picking out Tristian O'Driscoll who showed immense skill to evade two would-be tackles as he then fired a cracker that beat the goalkeeper. However, the back peddling full back for St Kevin's Zach Murray just got back to clear the ball off the line.

Moments later, Pike took a massive vice like grip on this Cup final when a truly wonderful piece of quick fire football saw the Hoops net minder Ross Ryan find Ryan Lipper with his kick out, who in turn cushioned a brilliant ball out wide to Maddison Mc Guane who yet again showed immense skill to ease by the defender. She then hit an exquisite ball into the mid area and the in running Tristian O'Driscoll fired a brilliant effort to the bottom corner of the net and put Pike well in control.

St Kevin's then began to push on but they did create a chance or two but a bang in form Pike net minder Ross Ryan who dealt with whatever came his way in brilliant fashion.

As the half wore on each of the Pike players grew in stature putting in great tackles to curb any threat from St Kevin's. As the half wore on Pike were indeed getting stronger and with that saw out this epic game till the end to emerge brilliant winners of the U12 SFA INational Cup Final.

It would be unfair to pick out any player of the match as this was an all round team performance.

The Pike management team of Dom Lipper, Frank Stewart, Rob Ryan, Gary Hartigan, Jonathan Delaney and Cyril Costelloe deserve plaudits as well as they have put in massive work into this squad who reaped the rewards with this victory.