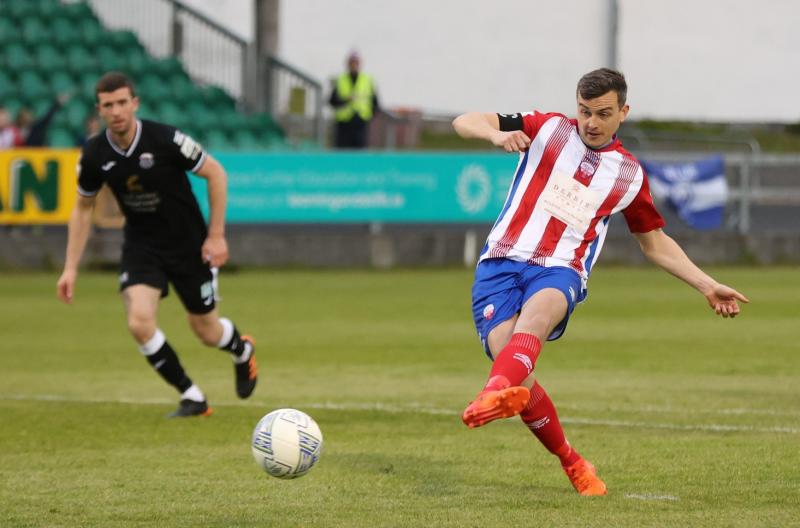 TREATY United played out their third successive home draw in the SSE Airtricity League First Division in the space of a week when their entertaining Munster derby clash with Cobh Ramblers ended 2-2 at the Markets Field on Friday night.

Marc Ludden scored both Treaty goals from the penalty spot, one in either half, as Treaty picked up another point in their battle to secure a promotion play-off spot.

However, the home side will feel more than a degree of frustration at being unable to take full points from the content.

Visitors Cobh played the final quarter of the game with 10 men following the sending off, but Treaty were unable to come up with a precious winning goal. Treaty's last win in the First Division was against Wexford FC on April 18.

Treaty remain fifth in the league table, three points clear of sixth-placed Wexford FC who played out a 1-1 draw with high-flying Cork City at Turners Cross.

Treaty United manager Tommy Barrett named the same starting XI from the side which drew 0-0 with Longford Town on Monday night for this latest Munster derby fixture.

The matchday squad did see Mark Walsh return to the bench alongside Scott Kirkland.

Home side treaty almost made the best possible start inside the opening minute. Conor Meoldy raided down the left before crossing for for Dean George. However, the striker's glancing effort on goal flashed agonisingly wide with just the 'keeper to beat.

Two minutes later Lee Devitt flashed a header over the crossbar from Matt Keane's cross as the home side continued to threaten an early goal.

However, Treaty were not to be denied and the home side hit the front in the fifth minute when Marc Ludden converted from the penalty spot much to the delight of the home support.

The Treaty lead last just 10 minutes as Cobh, who had lost three of their previous four league games, drew level in the 16th minute through an unfortunate Joe Gorman own goal.

Treaty United took time to recover from that blow and it took 15 minutes for the home side to create their next decent opening. Dean George created space with a clever turn 30 yards from goal, before spraying the ball out right.

The ball was played in to Melody, but is effort on goal flew just past the upright.

At the other end, Cobh continued to pose a significant threat and Treaty survived a huge scare in the 39th minute.

James O'Leary's clever back heel inside the Treaty penalty area created a clear cut opportunity for Danny O'Connell. However. home 'keeper Jack Brady produced a top class save from close range to prevent the visitors from going in front.

The sides remained deadlocked, 1-1, at half-time.

The visitors then hit the front in the 52nd minute. Danny O'Connell's delightful cross was headed home by the unmarked Brendan Frahill for 2-1.

The Cobh lead was short-lived, however, as Treaty hit back for an equaliser just 90 seconds later. Marc Ludden again showed terrific composure to score from the penalty spot and tie up the scores at 2-2.

The open nature of the contest continued with both sides looking dangerous in attack.

Cobh came within a whisker of regaining the lead in the 62nd minute when O'Connell and O'Leary combined to create an opening. However, Luke Desmond's thunderbolt of an effort came crashing back off the upright, to the relief of home supporters.

The complexion of the game changed in the 67th minute when Cobh were reduced to 10 men after a last man back illegal challenge by O'Sullivan-Connell on the edge of the penalty area.

From the resultant free-kick, hat-trick seeking Ludden was denied by a smart save from Barron.

As Treaty pushed for a winner, Joe Collins was denied by a smart save with his feet from Cobh netminder, Barron in the 84th minute.

However, both sides had to be satisfied with taking a point from the game.

Next up for Treaty United is a trip to the RSC on Friday night next to take on Waterford FC.