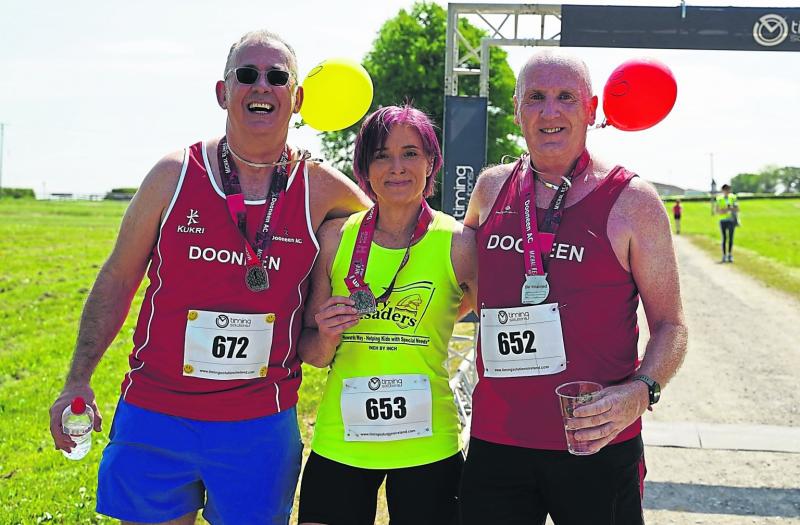 Michael McMahon, of North Cork AC, led from the start and took first place in a time of 55:36. His lead was more than a minute at half-way, but West Limerick’s Karl Lenihan finished very strongly reducing the gap to just 18 seconds at the end taking ‘second’ in 55:54.

The Women’s race was won by Siobhan O’Doherty, of Borrisokane, in 1:02:26. The 37-year-old O’Doherty is frequently a  contender for races in the region.

Thanks also to sponsors, volunteers, committee members, Dooneen AC, Limerick Racecourse and all who contributed to a very well received event.

It was won by the ever consistent Declan Moore, who crossed the line in a time of 20:33. Second was Ian O’Halloran from Clare’s ‘Boru Triathlon Club’ in 21:00. Paddy Cummins (Moycarkey Coolcroo) was 3rd in 21:03. 4th Kieran Lees (Moreabbey Milers).

Winner of the women’s race and 5th overall was Cappamore native Dymphna Ryan in a time of 22:47 for Dundrum AC. Niamh Moore of Leevale was 2nd woman and 10th overall in a time of 23:40. Bilboa’s Julie McCarthy completed the podium in 25:24.

Juvenile
Well done to all who took part in the North Munster Track and Field Championships in Castleisland where Eimear Galvin of Hazelwood College Dromcollougher set a new CBF, crossing the line in 44.4 secs in the Intermediate Girls 300mh.

Abroad
Sorcha and Íde MacDomhnaill ran the Highgate Harriers 10K in the UK in times of 33:18 and 33:54 respectively.

Leagh Moloney competing in the Scottish Open set a new Long Jump PB of 5.62m coming 1st in her U17 age group. She was 5th in the 100mh in 15.33secs despite hitting final hurdle.