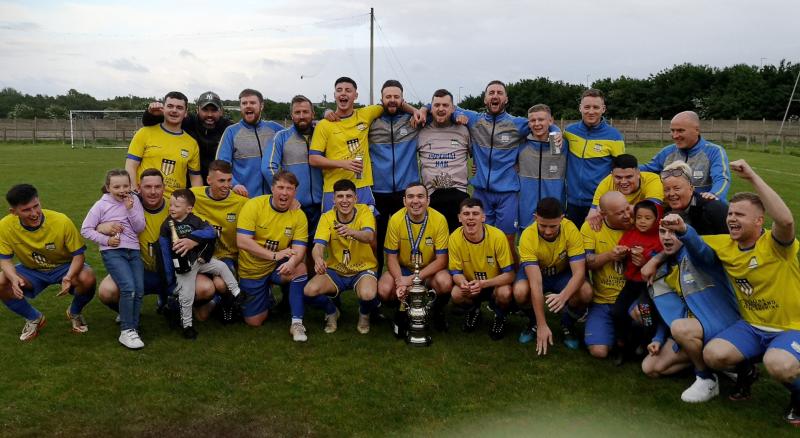 CAREW Park beat Hill Celtic with ease to be crowned Premier A Champions on Tuesday evening.

A shaky opening couple of weeks were overcome and Albert Slattery's side were superb for the remainder of the season and were well deserving champions.

Charleville finished second and will join Carew Park in the top flight next season following a 2-1 win over Murroe. Sean McCormack and Eoin Clifford netted for the home side. Dave Ryan replied for Murroe.

Newport Youths emulated the success of their Under 17’s by winning the Divisional Cup when they beat Parkville 3-0 in Jackman Park on Tuesday night.

A first half blitz by the Tipperary side saw them run in three goals without reply to seal the tie and while Parkville should be commended for their efforts, the physically bigger winners rarely looked like losing.

Hero if the night was Newport striker Diarmuid O’Riordan who bagged all three goals in a superb display.

Shane O’Halloran also had an excellent outing as did Stephen Madden while goalkeeper Stephen McCormack was rock solid throughout.

The winners took the lead in the opening quarter when O’Riordan pounced on a defensive slip and blasted in from just inside the box.

Goal number two was a beauty. O’Halloran took off on an overlapping run, traded passes with Madden and got to the end line before putting the ball across the face of goal where the in-running O’Riordan finished.

The killer third arrived before the break when Sean Bonfield and Aaron Coleman created the opening for O’Riordan to outpace his marker before firing into the corner.

The second half was a more even affair as Parkville chased the game. They had some neat players particularly Abz Azimi, Ben McNamara, Luke Carmody and Killian White but they could not find a way through a tight defence.