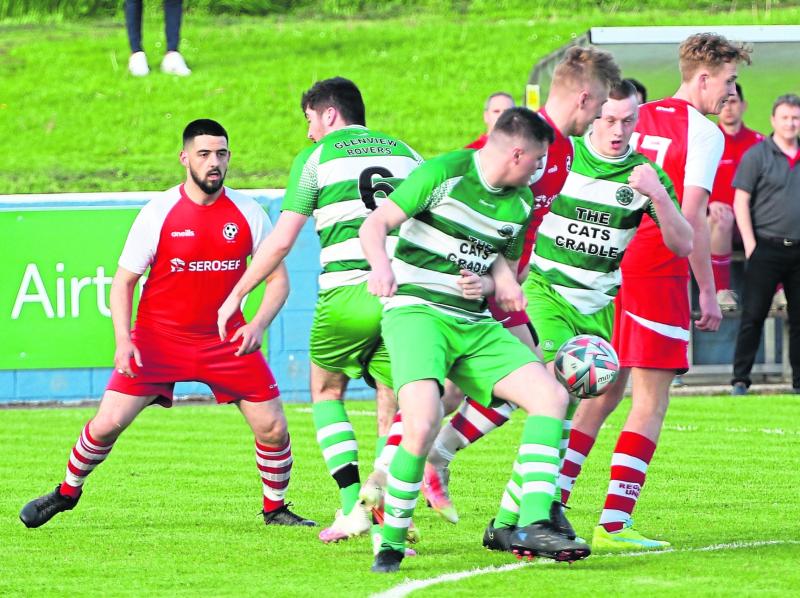 FAIRVIEW Rgs chance of being crowned Premier League champions was halted, at least temporarily on Sunday morning when Pike Rovers recorded the victory they needed to keep their title hopes alive.

Colm Walsh O’Loughlin’s first half goal means the sides on now locked on 47 points with one game each left. Fairview take on Regional Utd and Pike Rvs play Nenagh AFC. While it’s not a given, form would suggest we may need a play off to determine the resting place for the Fran Mullally trophy for the next twelve months.

The sides produced a cracking tie and although it petered out in the latter stages, the result was in doubt to the last kick.

Pike Rvs will be delighted to head into next weekend’s FAI Junior Cup final on the back of such a positive display. Once again, their back four was superb with special mention for Adam Lipper, who has blossomed into a serious player.

Colm Walsh O’Loughlin could not have picked a better game to produce his best display of the season. He was excellent and his goal just topped the performance.

Fairview were very good in the opening 45 minutes but never seemed to be able to lift in after the break. It was not from lack of trying but all too often their efforts came unstuck when they reached Lipper, Mullins and Co.

On the positive side, the Blues will have time to regroup and redo after they take care of a Munster Final date.

The home side threatened first when Shane Duggan’s inswinging corner kick saw Danny O’Neill well positioned at the back post to head off the line but the ball struck the upright and flew back across goal before the danger was cleared.

Mark Slattery tried a long-range effort but Gary Neville was perfectly position to hold and at the other end a 20-yard volley by Steven McGann flew just over the top.

Fierce determination by Robbie Williams saw him win a ball that looked lost and a series of passing the player manager delivered a ball into the area where Conor Layng guided his header goalward but it struck the crossbar.

Before the break, the frame of the goal was in picture again. A good move by the home side saw Judge play a long ball wide to Conor Coughlan who got around his marker and fired from an acute angle off the crossbar. The replat fell to Judge who vicious shot was tipped over by Gary Neville for a fruitless corner kick.

Pike’s top scorer, Layng had two good chances either side of the half time break but hit the side netting and fired wide of the upright. In between AJ Moloney’s overhead kick was narrowly wide of the Pike goal.

With nothing to lose, Fairview pushed forward but found the defence too tough to break through. It was the visitors who went closest to adding a second when Walsh O’Loughlin skipped inside his marker but his shot across goal was just wide of the far post.

BALLYNANTY Rovers with goals from John Connery and Adrian Power beat Regional Utd 2-1. An own goal accounted for United’s score.

Aisling Annacotty and Nenagh AFC played out an exciting 3-3 draw. Richkov Boevi and a double from Liam Quinn cancelled out Nenagh goals from Matt Spain and Bryan McGee (2).

In the Premier League lower tier there was a dramatic turn of events in the penultimate round of games.

Mungret Reg who led the way could only manage a share of the spoils with Coonagh Utd. That result coupled with Janesboro’s 4-0 win over Prospect means that ‘Boro will top the group if they can beat bottom side Geraldines in their final outing. Morgan Clancy, Christy O'Neill, Jack Fitzgerald and Kieran Long were the Janesboro scorers.

At the other end Kilmallock ended up with the points from their game with Geraldines which means they can still avoid the drop if they take something from their final game at home to Coonagh.

HYDE Rgs eased their disappointment at losing out to Granville Rgs in the Division 1A League race by winning the O’Halloran Cup with a 4-0 win over Castle Rvs at Jackman Park on Saturday evening.

Two goals apiece for Evan Shine and Dylan O’Neill secured the win against a hard-working Castle Rvs combination that had to plat with ten men for most of the second half.

The winners were well in control for much of the game led by a back four in which Dylan O’Neill had a towering game.

Ahead of him Alex Kiely and Dean Casey dictated affair but in truth it was more a team effort overall.

Castle looked dangerous when they got Michael Ryan on the ball but the Hyde defence read the danger and starved him of possession. Jack Flavin and Paul Kiely were also prominent for the runners up.

Hyde took the lead after twelve minutes. A free kick 25 yards from goal saw Evan Shine step up and curl a beauty around the wall into the top corner.

Castle went close to an equaliser when Ryan’s header from eight yards skidded wide of the upright and just before the break David Doherty saw another header miss narrowly for the county boys.

Half time saw Hyde emerge with a pep in their step. They got their second when Steven Fitzmaurice’s corner kick saw the inrushing Dylan O’Neill blast home from six yards.

O’Neill got the third with a perfectly placed header at the back post into the roof of the net from Evan Shine’s corner kick.

The final goal came from the spot after Evan Shine had been upended he dusted himself down to slot the spot kick home to complete the scoring.

The top two in the Premier A League won on Saturday to ensure the title race goes to the final day.

Carew Park hit Newport for five at the Tipperary venue. Mark McGrath, Pat Boyle, Adam Frahill, Gary Griffin and an own goal did the damage.

In the Premier A Cup semi-final Carew Park eased past Athlunkard Villa to set up a clash with Charleville in the final. Danny McCarthy (2), Jamie O’Sullivan and Mark McGrath scored in a 4-0 win.

Aisling D reached the final of the Open Cup following a hard-fought win at Dromore Celtic. Lee Madigan scored for the home side but goals from Liam Danaher and Jason Lipper sets up a final date for Aisling with Caherconlish.

Pike Rvs needed a point to be crowned champions in Division 3A League on their trip to Herbertstown, but they came up well short with the home side running in five goals (including an Oisin O’Grady hat trick) without reply.

Croom Utd needed a win at home to Granville Rgs B to force a league play off and succeeded in their goal, winning 2-1 thanks to goals from Gary McInerney and Dylan Murphy.