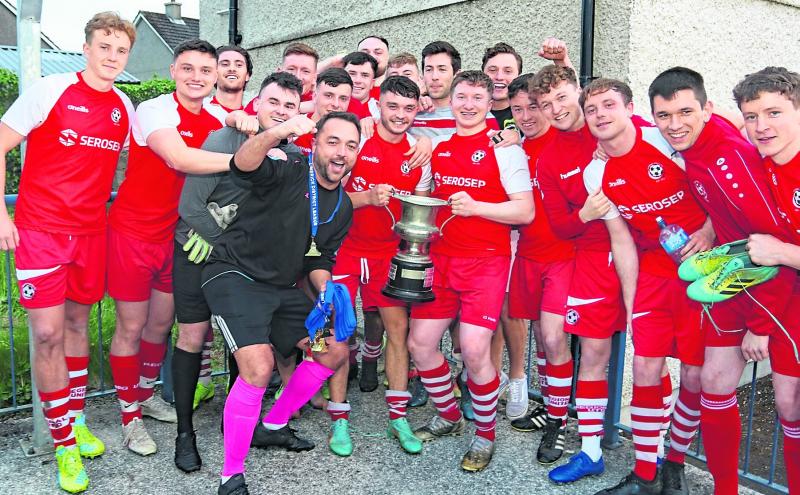 Regional Utd B 2 Glenview Rvs 1
REGIONAL United completed the first part of a potential double when they captured the Division 1B Cup following a 2-1 win over Glenview in Jackman Park on Friday evening.

Leading the way in the league by a point over Caherdavin, whom they play in the final game, Regional were determined to go into that game in a positive frame of mind and they did it thanks top a goal in each half by Gerry Fitzpatrick and Jeff Mannion.
Jack Delaney’s goal in between was all Rovers could muster against a determined United side.

Led by veteran keeper JJ Hartigan who kept his side in check all evening, the winners had good performers all through.

The back four were rock solid. In the middle of the park Aaron O’Hanlon quietly but effectively got on with his job while up front, Fitzpatrick always looked a threat.

Few gave Glenview a chance coming into the tie but they showed plenty of grot and determination.

Shane Byrne and Gabriel Burke O'Dwyer made life difficult for the winners all around the park and Barry Butler and Jack Delaney also showed up well on the evening.

A tentative opening half saw little in the ay of clear chances until the half hour mark when Eoghan Killian’s run into the box was blocked but the ball fell to Fitzpatrick who swiveled to shoot home from the edge of the six yard box.

Glenview emerged after the break determined to get back in the game and got their reward within ten minutes when a sweeping move ended with Sean Keane putting a ball across the face of goal for Jack Delaney to finish.

With the tie evenly poised, Regional found another gear and grabbed the winner when Byron Fitzgerald put a superb ball across the face of goal for the in-running Fitzpatrick and Mannion with the latter getting the vital touch to knock it over the line.